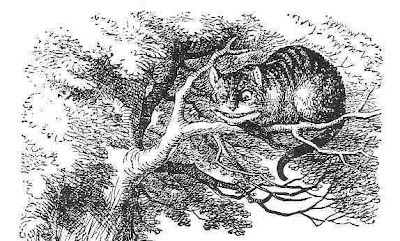 The question as to the origin of the expression “Cheshire cat” was raised in the columns of Notes and Queries on April 24, 1852, where the following explanation was proffered by “H.,” a good thirteen years before Alice’s Adventures in Wonderland was published:

I remember to have heard many years ago, that it owes its origin [the Cheshire cat] to the unhappy attempts of a sign painter of that county to represent a lion rampant, which was the crest of an influential family, on the sign-boards of many of the inns. The resemblance of these lions to cats caused them to be generally called by the more ignoble name. A similar case is to be found in the village of Charlton, between Pewsey and Devizes, Wiltshire. A public-house by the road-side is commonly known by the name of The Cat at Charlton. The sign of the house was originally a lion or tiger, or some such animal, the crest of the family of, I believe, Sir Edward Poore.

At it happens, H. was wrong about Sir Edward Poore, third baronet, of Rushall in Wiltshire, whose crest was not a lion but an ermine-sleeved arm clasping an arrow. However, the Egertons of Tatton Park and Arley Hall in Cheshire did have a lion on their coat of arms, which was apparently painted on the signs outside inns traditionally associated with the family and their estate workers. Certainly there was once no shortage of inns in Cheshire with strong feline associations: The Red Cat at Brimstage, two called The Cheshire Cat, one at Nantwich and one at Brinnington, The Cat and the Lion at Stretton (which is not far from Daresbury, where Lewis Carroll was born) and The Cat and Fiddle at Buxton.

Or else the cat might have originated as a joke at the expense of some local identity such as Mr. Caterling, a gamekeeper in the time of Richard III who was noted for his ferocious way of dealing with poachers. It does not seem very likely that to grin like a Cheshire cat is merely an abbreviation of to grin like a Cheshire Caterling but this has also been proposed. According to another story the same Mr. Caterling had a grossly disfiguring sabre scar on his face. Other Cestrian candidates are one Thomas Catlin, who was evidently disliked because he was mean (and wore what would today be called a sadistic smile), or Sir William Catesby, a Speaker of the House of Commons who was beheaded at Bosworth in 1485.

Carroll depends here upon the strong contrast between his rather spiky protagonist (who gesticulates in a decidedly unfeline way) and what most people observe in real cats. However, there are certain points of similarity between the Cheshire Puss and domestic cats that keep us on our toes: For example, cats do get angry and, when provoked, horripilate, that is, make their fur stand on end so they look bigger and more threatening. (This useful skill is also called piloerection.) And the Cheshire cat is quite right: in a rage, usually before combat, cats crouch close to the ground, bare their teeth and swish their tail from side to side. Charles Darwin was particularly struck by the fact that in this more extreme state of anger, cats do not bother to horripilate. As well, particularly when hunting rodents, cats chatter, rapidly clicking their teeth together, a reflex that is thought to anticipate the mechanism by which they eventually secure their prey by the back of the neck and sever its spinal cord.
The most memorable aspect of Lewis Carroll’s invention is of course the Cheshire cat’s famous magical vanishing act. Was T. S. Eliot recalling it when he devised the following stanza of his rather gloomy poem “Morning at the Window’ (1917)?

The brown waves of fog toss up to me
Twisted faces from the bottom of the street,
And tear from a passer-by with muddy skirts
An aimless smile that hovers in the air
And vanishes along the level of the roofs.

It seems at least possible. Certainly the gesture has prompted many different explanations ranging from the waning of the moon, traditionally associated with madness, to Sir Shane Leslie’s theory that the elusive cat was Carroll’s satirical representation of the catholic Archbishop of Westminster, Cardinal Wiseman. Perhaps it is as simple as this: Carroll was fond of cats, and Alice Liddell, his subject and muse, owned a tabby cat called Dinah.
Posted by Angus Trumble at 4:22 PM