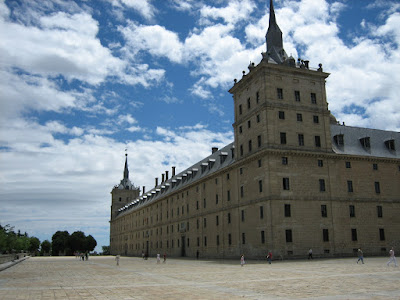 El Escorial must surely count as one of the most extravagant acts of self-mortification ever accomplished by a Catholic prince. In any case, land-locked Madrid was a bizarre place from which to rule over a maritime empire and most of the rest of the known world, but in the 1570s King Philip II, the richest man in Europe, took retreat from the world a whole step further by relocating his court and government to his enormous new granite monastery on a commanding hillside, an energetic half day’s ride from the capital. It functioned as a religious establishment, royal burial ground, oratory, confessional, library, school, university, basilica and palace, the residential portion of which is notable for its modesty and unpretentiousness. The place is above all severe, but in scale and magnificence of design it makes Windsor look like something out of the Flintstones.

I went to participate in a summer school run by the University of Madrid on the subject of the Westmorland, a British merchant vessel that was captured with two other ships in 1779 by the French, soon after setting sail from Livorno. Apart from the several thousand barrels of anchovies in the ship’s manifest, the Westmorland carried numerous crates containing portraits, history paintings, antiquities, books and prints, sheet music, relics and other precious objects belonging to English grand tourists and consigned in their absence. In the Spanish port of Málaga, the Count of Floridablanca, Charles III’s prime minister, swiftly saw the opportunity to stock the new Royal Academy of Fine Arts of San Fernando in Madrid by confiscating the lot. And there they remain, a marvelous snapshot of English taste in the later stages of the Grand Tour. We are currently planning an exhibition of the stuff here at Yale.

The summer school lasted for a week, and this gave the foreign visitors a rare opportunity to see the whole of the Escorial systematically and in chronological order, which is not a feat that can be accomplished even in a single day. Philip’s modest apartment was designed with a convenient hatch into the sanctuary of the basilica for ease of bedside communion. In the other direction, also from bed, he could look out over the magnificent dry valley down towards Madrid. A few steps away is the gloomy staircase down into the nine opulent rooms of the royal vault where the relations lie, though Mary Tudor is banished to a relatively unimportant spot second last before you reach the gift shop. Don Carlos, of Verdi’s opera, lies next to her. Only queens who gave birth to kings qualify for burial in the main octagonal room.

In the eighteenth century the Bourbons tried to cheer up El Escorial by decorating an entire set of apartments with Brussels and other tapestries (for which some remarkable full-scale cartoons by Francisco Goya survive in the Prado). The first thing you see as you enter is an exquisitely stitched peasant vomiting in a ditch. One evening at about 9.30 (well before dinner time) we were given a concert of liturgical music, a whole mass that was written for the church of the Escorial soon after its construction by Juan de Villanova. It was rather creepy.

But nothing in creepiness compared with the Valle de los Caídos (the Valley of the Fallen), Generalissimo Francisco Franco’s enormous monument to himself and his régime, which occupies a whole valley not too far distant from El Escorial—every stone of which was dug, cut and lifted through the 1940s and 1950s by slave laborers consisting mostly of defeated Republican prisoners of the civil war. The huge subterranean barrel-vaulted basilica—carrying an extravagant inscription in the narthex recording its expedient Cold-War dedication by Pope John XXIII—extends the entire length and breadth of a small conical mountain, at the summit of which rises a granite cross. You take a funicular to get all the way up there.

The colonnaded west front is a sort of military parade ground along the lines of Nazi Nuremberg. This overlooks the rest of the valley, which is sprinkled with further mini-basilicas connected by meandering paths that for many pilgrims form a larger than life-sized stations of the cross (covering an area that must compete fairly well against that of the real Jerusalem). Nestling in a more intimate hollow at the eastern, enclosed end—but not much more intimate—are the cloisters and extensive rose gardens of the quiet royal Abadía Benedictina de la Santa Cruz de el Valle de los Caídos, a nod to the old Spain, in which masses are perpetually said for the repose of the fallen, some more than others, I daresay, and judging from the size of the accommodations there must be hundreds of priests going at it night and day. This is not a place I shall hurry back to, but like much else in Spain it has the effect of compelling you into a melancholy, stunned silence.