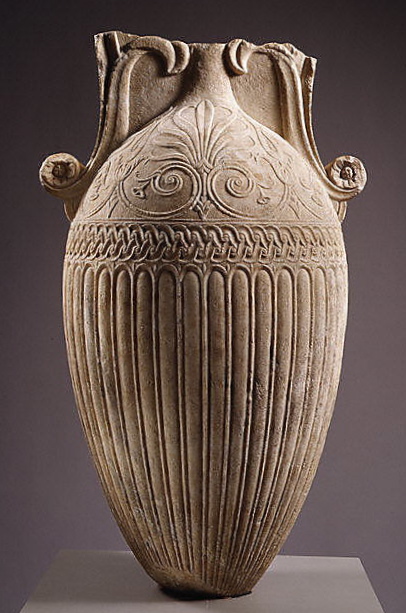 Among its many superb examples of Classical Greek funerary sculpture, the Metropolitan Museum of Art in New York is fortunate to possess an important Attic marble loutrophoros, an object of really outstanding beauty to which I am drawn as often as is practicable. A loutrophoros (from the words loutros and phero, meaning bath and bring) is a tall vase with a high, slender neck, an egg-shaped body and a wide, flaring mouth supported by two handles. It was generally used in Attic wedding rituals and funerary rites. According to Harpokration, “it was the custom at marriage to send for a bath on the wedding day; for this purpose they sent the boy who was the nearest relative, and these boys brought the [water for the] bath [in a loutrophoros]. And it was the custom to put a loutrophoros on the tomb of those who died unwed.” From about the mid-fifth century B.C., the shape of pottery loutrophoroi and lekythoi began to be translated into marble as a more enduring kind of grave marker, the loutrophoros apparently retaining its traditional use for men and women who died unmarried. It was also represented among the objects carved in relief on larger, more elaborate stelai, as a motif clarifying the identity of the deceased. Like stelai, loutrophoroi were sometimes carved  with figures, representations of the deceased with members of his or her family. The large number of loutrophoroi surviving from the second half of the fifth and the fourth centuries B.C. indicates that the type was popular until the time of the sumptuary laws of Demetrios of Phaleron (317/16–316/15 B.C.), and that masons kept a ready supply.

The so-called Brummer loutrophoros (Pentelic marble, 30 in. high, maximum diameter 48½ in., Given in memory of her husband, Ernest Brummer, by Mrs. Ella Baché Brummer, 1975.284) probably dates from about the mid-fourth century B.C., and is one of the finest of its type to have survived from antiquity. Although it is fragmentary—the foot and the base or plinth on which the name of the deceased was probably inscribed, together with the upper section with the high neck, handles, and flaring mouth, have all been lost—the body of the loutrophoros has survived in excellent condition. Evidence of some weathering may be discerned on the front shoulder (to the right), and on the back. Towards the bottom the marble is slightly discolored, and a dark vein runs down the left flank on the front. There are a few chips and other minor losses along the central band and what remains of the handles, as well as a diagonal break at the bottom where it was separated from the foot, but compared with most other published examples the Brummer loutrophoros is very well preserved indeed.

The generous and exceptionally beautiful ovoid shape is decorated with various types of ornament carved in low relief. Three zones are articulated. The lowest of these is adorned with the type of fluting known as gadrooning. Each convex vertical strip or gadroon tapers towards the foot, separated from its neighbours by sharp ridges producing strong vertical lines of shadow which emphasize the graceful swell of the body. On the front, a horizontal band of guilloche ornament—an interlocking pattern of twisting ribbons—divides the lower zone of gadrooning from the shoulder. That gadrooning continues in the upper zone on the back, but on the front a rich field of foliate ornament fills the shoulder. This consists of upright palmettes alternating with lotos buds linked by volute-shaped tendrils from which trumpet-shaped flowers sprout at strategic intervals. The composition is ingeniously arranged so that the fronds of the central palmette align with the base of the neck. The upper part of the loutrophoros, that is, the high neck and the handles, which must originally have culminated in large scrolls supporting a wide mouth, was formed from a single flat vertical extension springing from the shoulder. The surviving portion shows that the neck was carved in relief, and that the handles flared outwards. The lost upper portion of the loutrophoros must have almost doubled the current height of the piece. The base of each handle, positioned at this median point, is decorated with scrolls and rosettes. Foliate ornaments flow out of the scrolls and curl inwards to touch the neck, skillfully rendered in relief so as also to suggest that they twist outwards towards the viewer, and into three-dimensional space.

Some marks of the sculptor’s carving technique survive on the back, which was evidently of only secondary importance. There, the horizontal guilloche pattern is accurately inscribed, but merely blocked in, and not treated with anything like the degree of finish discernible on the front. Point and claw marks are clearly visible on the flat upper section of the back, between the handles. The front shoulder and the guilloche band, by contrast, exhibit a high, indeed pristine degree of finish. The field which supports the palmette ornament is smooth and continuous, as though the stylized buds, leaves, and flowers have been daintily applied to it. The surface is worked with impressive consistency, the depth of the relief evenly maintained throughout. The precision of the carving combined with the delicacy of the organic motifs and the superb modeling of the entire shape, are qualities typical of Classical sculpture in Athens during this period, qualities which Nicholas Penny has described in another context as a “teasing combination of the glyptic and the plastic,” or “a taut, chiseled, geometric discipline in dialogue with soft, modeled, organic form.”

A number of the decorative motifs on the shoulder of the Brummer loutrophoros appear in painted form on a large Apulian loutrophoros attributed to the Metope painter from about the same date. The palmettes, the trumpet-shaped flowers, the lotos buds, curling tendrils, and rosettes—to which is added a cheerful, flying Eros holding an alabastron—are all deployed in the same position on the shoulder of the Apulian loutrophoros. Here they are executed with the fluid playfulness of the painter’s brush, lacking the sparer precision with which the Athenian sculptor handled the decoration of the Brummer loutrophoros. The comparison provides a telling glimpse of the contrasting manner in which identical decorative conventions were employed on the Greek mainland and in Greek colonies in Southern Italy. The Apulian loutrophoros is particularly interesting in the present context because a bronze loutrophoros is included among the decorative elements of the naiskos, which occupies most of the front of the main body of the vase. Standing on the floor between between the mistress and her maid, the loutrophoros is painted in that shade of yellow which was normally used to depict polished mirrors and other bronze objects. The long neck, distinctive, curling handles and gadrooned body leave no doubt that the little vase belongs to the loutrophoros family. The image serves as a useful reminder that the technical challenge of reproducing metal-work effects—most notably elaborate, twisting handles—lay behind the production of loutrophoroi in pottery and stone.

The Brummer loutrophoros belongs to a relatively large group—known in the literature as rundplastische Ornamentlutrophoren—which were produced from about 380 to about 317 B.C. Most of them have gadrooning and two, three, or four-ribbon guilloche ornament of almost precisely the same type, although relatively few employ palmette and floral decoration on the shoulder. The most important development from early to late exempla was a gradual change in the shape of the body. The center of gravity in early examples (to about 365 B.C.) tends to be located in the upper part of the body, with a correspondingly high guilloche band. From about 365 to about 340 B.C., the period now regarded as the Classical phase of the ornamental loutrophoros type, sculptors eased towards a more comfortable, properly egg-shaped form, the center of gravity and the guilloche band gradually descending to a position slightly above the center of the body. The presence of palmette ornament on the shoulder, not usually found before about 350 B.C., and the use of a solid upright stone section to support the arms, neck, and lip—a practice which became firmly established at around the same date—suggests that the Brummer loutrophoros belongs to the middle decade of the fourth century B.C.

The Brummer loutrophoros was presented to the Metropolitan Museum of Art by Mrs. Ella Baché Brummer in memory of her husband the art dealer Ernest Brummer (1891–1964). Mr. Brummer inherited the object from his brother and senior partner Joseph Brummer (1883–1947). The Brummers dealt in art and antiquities of every description, and gave a number of prominent modern European painters and sculptors important early exhibitions in the United States, including Derain, Matisse, Modigliani, Maillol, Rouault, and Brancusi. The Brummers also built up an excellent relationship with the Met. Their close association with Gisela M. A. Richter, head of the department of Greek and Roman antiquities, and James J. Rorimer, head of the Medieval department and director of the Cloisters, led to some of the museum’s most important ancient Greek, Roman, and medieval acquisitions, frequently on generous terms. Joseph Brummer, whose great passion was ancient sculture, bought the loutrophoros probably after 1926 when most of his best pieces were shown at the Buffalo Fine Arts Academy. He seems to have been especially interested in loutrophoroi. After his premature death in 1947, no fewer than five of them were offered in the auction sale of his collection at Parke–Bernet, including the present piece, said to be “suitable for the terrace or patio.” But he had handled other important examples as well, most notably the Santa Barbara loutrophoros, which he acquired in 1935 from B. Galdakis, probably in Athens, and sold in 1940 to Wright S. Ludington. Yet another of Joseph Brummer’s loutrophoroi, with surviving fragments of the neck, handles, and lip, was included in the 1979 sale of the Ernest Brummer collection. The Brummer loutrophoros was not sold at the Parke–Bernet sale of 1949, but passed into the collection of Ernest Brummer and, after his death in 1964, to his widow the donor. The strong commemorative and nuptial associations of the loutrophoros type, and its very high quality, make it a fitting memorial to Mr. Brummer, both as a husband and as an old friend of the Metropolitan Museum of Art.
Posted by Angus Trumble at 2:32 PM