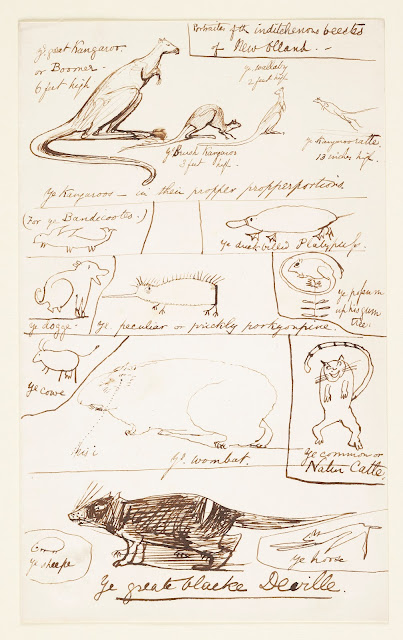 This remarkable undated drawing by Edward Lear in the Morgan Library and Museum in New York, headed “Portraites of the inditchenous beestes of New Olland,” must belong to the period from 1831 to 1837 when the artist spent many months at a time recording the contents of the thirteenth Earl of Derby’s famous menagerie at Knowsley, near Liverpool. During that period Lear also provided much delight to the many Stanley children, grandchildren, nephews, nieces, and a tribe of friends and neighbours, with quick, sharp-witted drawings and funny rhymes and verses that eventually led to the publication of his A Book of Nonsense (1846). The present sheet effectively fused the light task of amusing the children with the more serious matter of Natural History. Lord Derby was intimately involved with the issue of taxonomy through his presidency of the Linnean Society from 1828 to 1834, and of the Zoological Society of London. At the same time, Lear assembled a surprisingly deft catalogue of the pastoral realities of Australia Felix, presumably furnished by the naturalist and field man John MacGillivray, upon whom Lord Derby relied for his supply of Australian birds and animals.

From top to bottom, Lear’s composition lists in horizontal registers, first “Ye kangaroos—in their propper propperportions,” namely “ye great kangaroo, or Boomer—6 feet high” (probably the eastern grey kangaroo, Macropus giganteus; boomer was the expression for a male of the species), “ye Brush Kangaroo 3 feet high” (perhaps inaccurately distinguished at this date from various species of wallaby), “ye wallaby 2 feet high” (one of approximately 30 species), and “ye kangaroo ratte 13 inches high” (genus Dipodomys). There follow an absurd six-legged creature with wings and a fish’s tail “(For ye Bandicootes)” (20 species) (left)—Lear either had no access to a specimen, or else chose to ignore it because the name may have struck him as simply too good to pair with anything real—and “ye duckbilled Platypuss” (Ornithorhynchus anatinus) (by contrast very accurately depicted on the right). Below these are “ye dogge,” probably not indigenous, “ye peculiar or prickly porkyoupine” (presumably one of the four species of echidna that belong to the family Tachyglossidae), and “ye possum up his gum tree” (seventy species, possibly the common ring-tailed [Pseudocheirus peregrinus] or common brushtailed [Trichosurus vulpecula])—its tail forming a delicious counterpoint to that of the possum directly above. Continuing in a similar, nature/agriculture vein, the following register contains “ye cowe,” “ye wombat [with] his i” (probably the common wombat, Vombatus ursinus) and, especially mischievous and bewhiskered, “ye common or Native Catte” (probably the striped and spotted quoll, genus Dasyurus). Finally, at the bottom, “ye greate blacke [Tasmanian] Deville” (Sarcophilus harrisii) is flanked by “ye sheepe” (left) and “ye horse” (right).

That tiny fleck of detail furnished by Lear in the annotation of his splendid wombat drawing—a long dotted line leading from the creature’s eye to the phrase “his i”—is strangely congruent with lines written more than thirty years later by D. G. Rossetti after the death of his own pet wombat towards the end of 1869:

I never reared a young wombat
To glad me with his pinhole eye,
But when he most was sweet and fat
And tailless, he was sure to die!

These verses (my italics) are a parody of part of the opening stanza of “The Fire Worshippers,” a poem that appeared in a strange novel by Thomas Moore called Lallah Rookh, first published in 1817 but reissued in London by Longmans, Brown, Green, etc., in 1854 and 1856, which is all about the betrothal of Vina, a Persian princess, and the journey she undertakes to meet her future husband. She muses:

…I never nurs’d a dear gazelle
To glad me with its soft black eye,
But when it came to know me well
And love me, it was sure to die!

The substitution of the cuddly, hairy wombat for Moore’s sleeker and far more attenuated gazelle is typical of Rossetti’s self-indulgent humor, and he clearly had no trouble adapting for himself the lovelorn mood of Vina, the gloomy Romantic heroine, in this instance at the expense of William Morris—who was the butt of Rossetti’s much larger and elaborate wombat joke.

Yet placed in the context of Lear’s “i” annotation, Rossetti’s “pinhole eye” seems most  suggestive. The origin and meaning of this apparently shared observation must necessarily for the time being remain obscure. It may not even require an explanation: The wombat’s eye is small indeed, and is much compromised by sustained exposure to daylight.
Posted by Angus Trumble at 2:36 PM