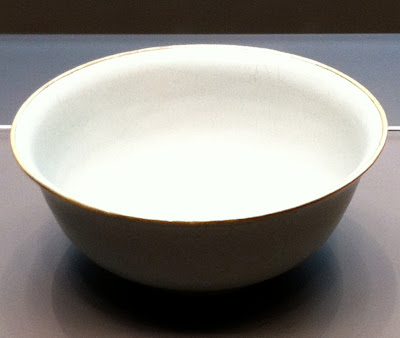 On my frequent visits to London I have established an unshakable ritual of paying at least one restorative visit to the Sir Joseph Hotung Centre for Ceramic Studies at the British Museum (Room 95), now home of the Sir Percival David Collection—a room of incomparable beauty and intelligent display. There is always something new and fascinating to learn there, but last week I was struck by the extreme dangers of overzealous connoisseurship.

My old friend the Qianlong Emperor (1736–1795) was a passionate collector of Chinese antiquities and objets d’art, and, like many connoisseurs before and since, regarded his taste and knowledge as rather more unassailable than they actually were. For example, the Emperor treasured this superb bowl, a masterpiece of so-called Ru ware from Qingliangsi, Baofeng county, Henan province, a product of the marvelous Northern Song dynasty, ca. 1086–1125. Ru has long been prized as the unrivaled apogee of the long tradition of Chinese porcelain manufacture. These stonewares, of which not even fifty examples have survived outside the kiln sites (the majority in England), emanated from a small handful of kilns near the Northern Song capital of Kaifeng that were exclusively devoted to the production of objects for the Imperial court. The master potters who worked there, unknown artists of real genius, produced slightly underfired (1,200–1,250 degrees Centigrade) pale grey stoneware forms of incomparable sophistication, to which were applied comparatively thick Celadon glazes of flawless consistency ranging in color from nearly white to a deep robin’s egg greenish-blue, which, when re-fired, produced a fine and miraculously consistent craquelure. If you want to torture a Chinese porcelain specialist, express much admiration for Ru ware but then ask them what can be done to fix all the little cracks.

The Qianlong Emperor’s instinct for quality was right on the mark, but unfortunately he concluded that his bowl was an exemplum not of Ru but of Jun ware. (Although Jun ware was also produced for the Northern Song court, the Emperor should have known it looked quite different from Ru, being covered with rather less subtle turquoise and purple glazes, at times so thick and unctuous that they seem held in the process of melting away from the golden–brown underglazes.) In any event, Qianlong wrote a poem in praise of the quality of Jun ware, and had it skillfully (and indelibly) incised on the inside of the bottom of his Ru bowl—it is definitely there, but unfortunately not visible in my inferior photograph. I fancy he had the gold rim added too. (Qianlong had a soft spot for gold, indeed basically anything flamboyant.) The characters translate thus:

Jun wares were all produced at the Xiuneisi [Palace Maintenance Office]. Many dishes have survived but bowls are difficult to find. In the palace alone are stored well-nigh a hundred dishes. Yet bowls are as rare as stars in the morning. What is there, forsooth, for which a cause cannot be found? Large bowls are difficult to preserve, small dishes easy. In this I find a moral and a warning. The greater the object, the heavier the task of its care. Composed by Qianlong in the cyclical year bingwu [the equivalent of AD 1786], and inscribed by imperial order.

All of this is true, but sadly not of the bowl in question. Which, I suppose, just goes to show you that it is far better not to carve your opinions into something that might some day turn out not to be what you were for whatever reason convinced it was. Wall labels and catalogue entries are far safer, and more easily corrected.
Posted by Angus Trumble at 1:45 PM