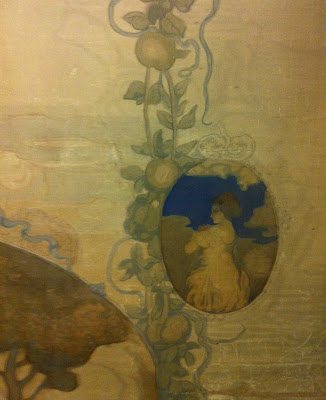 Despite their relatively poor state of preservation, the Garvan silks stand out as Charles Conder’s masterpiece. No other decorative project was as monumental in scale, or as complex in its various superimposed registers of imaginative detail or richness of coloring. I am not quite sure how Conder primed his thin silk support so as to prevent the watercolors from bleeding into the warp and weft strands—perhaps some sort of starch or size. Yet faced with such comparatively enormous areas to cover, Conder’s achievement here, using tiny brushes to apply his watercolors, and in various degrees of fine drawing, must have been as daunting as that of il Baciccio when faced with the task of applying an illusionistic fresco to the vaulted nave in the church of the Gesù. I suppose it is hardly surprising that, following his punishment by the critics, Conder never again attempted something as remotely ambitious, and it is probably true that working on a more intimate scale suited his soft temperament far better. We are creating three false walls in which to mount the nine silks, in groups of three, together with something that approximates the original “Louis-Philippe” molded surrounds in white with touches of gold—not too much—which leaves only the selection of a wall color. The logical choice would be the palest of lemon yellows, a color that exerted tremendous fascination in Paris and London through the 1890s, but that may not work owing to the natural discoloration of the silks. Perhaps a pale, very pale and powdery blue. We shall do some experiments, and see what we come up with.
Posted by Angus Trumble at 7:48 AM