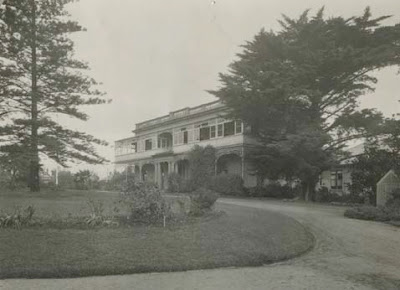 In 1970 Aunt Anne took a creative writing course in Geelong, and her working notebook contains much of interest (marked simply “A. Hall”). Among the longest essays is the following account of Old Girls’ Day at the Church of England Girls’ Grammar School (The Hermitage) in Geelong, long since subsumed into the octopus of Geelong Grammar School. The account is surprisingly unguarded, and before posting it I really wondered whether I should make a better effort to protect the identity of the dramatis personae. Actually, I think Aunt Anne substituted made up names; she certainly did elsewhere. However, upon much reflection I realized that by now Aunt Anne would have been nearly ninety years old, and the headmistress she says she hated, the rotund clergyman, and the outgoing President with the tombstone teeth must surely now be dead and buried. In America the practice of going to school reunions is firmly entrenched, but Aunt Anne here reinforces my own conviction that it is far wiser never to go back:

There we all stand in the sunshine, in our best clothes, looking warily round, thinking how our contemporaries have aged. We all get light-headed and a bit giggly on two small glasses of medium-dry sherry. My friend June and I are looking for the treasurer. She has gone in through the front door. At the doorstep we both hesitate. Girls are not permitted to use the front door, and the prohibition is still alive in our minds after thirty years. With a sense of bravado we step boldly in. Here in the hall, how often have I stood, seething with fear and a sense of injustice, waiting to “be seen” by the headmistress. The injustice still rankles. Children are very fair, and will take any punishment they deem just. How I hated that woman—partly because she could reduce me to tears of rage within five minutes, after which she would graciously forgive me, and I would be unable to defend myself, or reject the forgiveness. On now to the dining room, and a fairly meagre lunch of chicken pieces hidden in limp lettuce. We drink the health of The Queen, and cigarettes suddenly send clouds of blue smoke up to the high dark ceiling. Next we rise for “The School,” and the thick, sweet fruit cup is hastily passed round to the improvident who emptied their glasses for The Queen. The Chaplain responds for the school. A rotund, kindly little man, making coy little jokes. He refers to a past headmistress. “A headmistress,” he says, “from the top of her head to the tips of her toes.”
“How does he know?” asks June, under the polite murmur of accord.
“The mind boggles,” I reply, and we sit there sniggering like fifth formers, watched with gentle indulgence by the real sixth formers at our table—the newest old girls. Age has not wearied our enjoyment of our wit—nor improved it. Now the move to the Assembly Room for the Meeting. We snatch the opportunity to visit our old sleeping quarters. They have wire grills on the windows now—to keep the girls in, or the boys out? we wonder. We obviously didn’t have the same appeal. There was no need to protect us—or the boys. There is that plain, pasty-faced little girl with the red hair, grown into a plain, pasty-faced middle-aged woman with the red hair, and a hard green hat—Pat something. And there’s Judy. Put two long plaits over her ears, and thirty years have hardly altered her. Our mothers are in a group of their own contemporaries. One or two with sticks, but by and large a surprisingly alert and active lot. One senses the same reaction, towards oneself, of last year’s students, back to flaunt their trendy clothes and engagement rings in front of their friends, still imprisoned in their hideous uniforms.
A list of the Old Girls who have died during the year is read out, for the most part from the older group, and one felt sorrow but no resentment. But one name recalled a darling little round-faced child from the “Prep.” I remember her telling me she always gave the tram conductor a penny and kept the halfpenny. “He thinks I haven’t got any more,” she explained. And I looked at her guileless little face and enormous trusting brown eyes and admired her from the bottom of my un-enterprising heart.
The headmistress reads her report. She holds herself carefully erect. Her voice carefully enunciates the dry facts. Almost, it seems, she is afraid she will drop her aitches if she relaxes. Then the President—a good old girl, and enthusiastic old girl—but not much of a recommendation for the education her parents paid heavily for her to receive. I would like, she begins, to thank the headmistress very very much for her very interesting report. I’m sure we were all very interested indeed. During the year, she continues, it was my very very great privilege to be present at a very pleasant gathering of Old Girls in Ballarat. We were very disappointed that my own very dear headmistress—she bares her tombstone teeth, first deprecatingly at the present incumbent, and then warmly into the crowd, where her spirit remains crouched at the feet of the head-before-last—was unable to honour us with her presence. I would like, she commences her peroration, to say how very very honoured I have been to be your President, and how very very much I have enjoyed working for our dear Old School. I would very much like to thank (and she lists innumerable people, all of whom have helped her very much). And I would like to extend a very very warm welcome to the incoming President; I’m sure we’re all very grateful to her for taking on the task, and I’m sure you will all give her very much enthusiasm and support. And I’d like to thank you all very very much for all the enthusiasm and support you’ve given me in the two years I’ve been so very privileged to be your representative and work for our very dear Old School. With another flash at us all of her highly polished graveyard she subsides in her chair.
The piano crashes into our exhausted silence, waking those who have managed to nod off. Om pom-pom, Om pom, To School-fellows near us or distant…We all bellow out the rousing circular waltz with its ridiculous words—leaving the high bits to the young, remembering our singing mistress’s despairing efforts to make us sing it as though it meant something. It never did, it never will, but I expect I’ll be able to sing it right through (except the high bits) till the day I die.

That last point was certainly true.
Posted by Angus Trumble at 5:57 PM