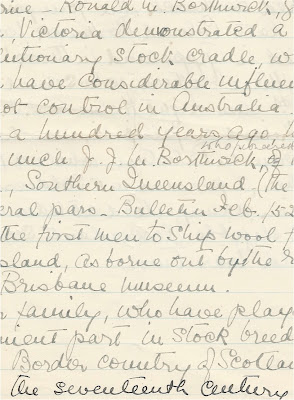 A single sheet of lined notepaper fluttered out of a folder early this morning, and must have been torn from a notebook long ago—perhaps the sign of larger plans that never came to fruition. It is inscribed on both sides in the fluid cursive of my late grandmother, Helen Borthwick, and headed “Is there anything in Heredity?”

On the 10th November /53, at the Veterinary School Grounds at Parkville, Melbourne, Ronald M. Borthwick, grazier of Sale, Victoria, demonstrated a revolutionary stock cradle, which could have considerable influence on foot rot control in Australia. Over a hundred years ago, his great-uncle J. J. M. Borthwick, who pioneered Tarong Station, Southern Queensland (the subject of several par[agraph]s Bulletin Feb /52) was one of the first men to ship wool from Queensland, as borne out by the records in the Brisbane Museum. Their family, who have played a prominent part in stock breeding in the Border country of Scotland since the seventeenth century, according to family papers, also produced some noted soldiers, the best known of whom, Major-General William Borthwick, was Wellington’s General of Artillery. Ronald Borthwick, the youngest son of the late Colonel Borthwick, who settled in Gippsland in the 80’s, was one of three brothers who served with the 8th Aus. Light Horse A.I.F. One son was killed at Gallipoli [Keith], another lost an arm in Palestine [Lex], while a fourth brother, a permanent soldier in the British Army, died at Aden in 1908 [John Malcolm]. All eligible descendants served in World War Two.

I think that stock cradle invented by Uncle Ron must have been revolutionary in the sense of rotational, rather than epoch-making, though part of me definitely hopes I am wrong about that. Foremost among the eligible descendants, my grandmother must have been thinking with pride of Uncle David and Aunt Anne, Mum’s elder siblings; she and Uncle John were too young to serve. I must track down those stray paragraphs in the Bulletin, which is evidently yet to be digitized by the excellent National Library of Australia in Canberra.
Posted by Angus Trumble at 8:41 AM