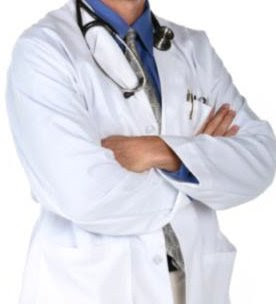 Perhaps the most irritating thing about living in an apartment building with such a comparatively high proportion of neighbors who happen to be medical students—in this case attached for at least several years to the Yale School of Medicine and the sprawling Yale–New Haven Hospital just down York Street—is that a high proportion of these self-confident young people wear their dirty white coats, even their green pyjamas, to and from work every day, crowding into our two airless elevators without any regard to the feelings of revulsion they stimulate among non-medical passengers.

These protective garments are generally also festooned with wands of office: besmeared stethoscopes draped around the neck, clunky paging devices clipped to the belt, and an array of well chewed ballpoint pens poking forlornly from the breast and hip pockets.

Yabbering obliviously into mobile phones, more often than not about their patients’ private affairs, even their rapidly diminishing prospects of recovery (May 13, 7.31 a.m., east elevator, going down), under normal circumstances it is unpleasant enough to share an elevator with a medical student, but even if they were completely silent—unlikely—it is those grubby white coats and green scrubs that offend one far, far more, and not merely because they shriek: “Make way for me; I am a medical student.”

Instead, you find yourself outraged by the fact that in the course of an average working day these already unattractive garments soak up tens of billions of endemic, playfully airborne, hospital-dependent microbes issuing from the rheumy pipes and tubes of the chronically ill. And by this simple process of basic epidemiology grotesque, slime- and catarrh-dwelling, tendril-dragging germs gain direct access to our apartment building.

It is of no consolation to me that medical students are mostly stunted, and that my nostrils are therefore located a good eighteen inches (on average) above the top of their head, because as everybody knows hot air rises, and one can almost hear the teeming bacteria jumping gleefully into mid-air out of the cheap white fabric (50% cotton, 50% polyester, with depressingly low thread count, I notice) and ascend ecstatically on miniature gusts and thermals. The only solution is to hold your breath.

True, the medical student is not the only agent of contagion in this forlorn community of ours. And we are well aware of the need to wash our hands frequently, cover our mouths when incommoded by a fit of coughing, and take all appropriate measures to insulate friends, colleagues, and neighbors from any and all harmful viruses or bacteria with which we for the time being may find ourselves afflicted.

However, leaving aside the obvious question as to why on earth you would want to spend your working life surrounded by, on the one hand, an army of resentful ancillary healthcare workers, and on the other, desperately sick people, while at the same time manacled to a built environment of scarcely conceivable hideousness, don’t doctors and medical students have any convenient spot where they can hang up or at least store their grubby white coats at the hospital, or even, dare one ask, have them laundered?

One final point. By generally accepted convention the white coat of the medical practitioner used to be three-quarter length, the hem hovering modestly within easy reach of the kneecap. Now, however, it has shriveled into a meager jacket that comes to an abrupt halt at the waist, the sartorial equivalent of cutting the final scene of Fidelio (for brevity).

I have no objection to the wearing of white coats in the hospital or clinical environment, but surely they should if possible be cut to the correct length. Let us assume that the Yale–New Haven Hospital can probably afford the extra bolts of white cotton. Much as neurosurgeons might hanker after white coats with an exceedingly long train (borne through corridors and into the operating theater by respectful junior registrars), most people would regard such a thing as perverse. Why, then, are we expected to take seriously the radically shortened white coat of current usage? Where, how, and by whom are these decisions taken?

Posted by Angus Trumble at 1:18 PM