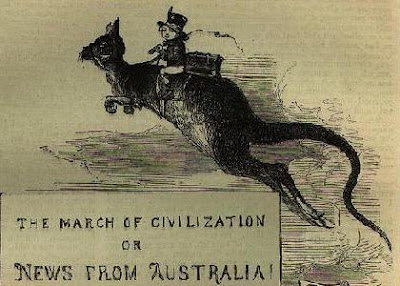 Our great great-grandfather, William Pearson, arrived in Port Melbourne on April 4, 1841, aboard the 659-ton John Cooper. The John Cooper sailed from Greenock (on the firth of Clyde, downstream from Glasgow) on September 15, 1840, via Cork (October 29), Lisbon (November 22), and Port Adelaide (March 8, 1841). It is not clear why the arrival of the John Cooper was not reported in the Port Phillip Herald, but fortunately it and its cabin passenger manifest were listed in the Geelong Advertiser on April 10, 1841. Augmented by information contained in the relevant immigrant and shipping lists the John Cooper manifest now assumes vivid clarity:

Steerage passengers: Joseph Annand (36) of the County of Banff, his wife Jannette (38), their two sons Joseph (12) and John (3); and their two daughters Bella (8) and Eliza (6); James Bailley (38) of Lancashire, his wife Agnes (38) their two sons John (8) and William (less than 1), and their two daughters Elizabeth (6) and Margaret (3); the sisters Elizabeth (28) and Grace Carmichael (26) of Lanarkshire; Martha Chambers (18); Ellen Fogarty (29) of Morayshire; John Fogarty (18) of Aberdeen (bounty withheld); Robert Hamilton (28) of Lanarkshire (bounty withheld); Robert Jamieson; James Johnston (25) of Fifeshire; Thomas McBoreland (27) of Ayrshire; Michael Larkin (26) of Louth; John Nicol (18); Thomas Robertson (30) of Selkirk; Robert Smith (28) and Beatrice Smith (21) of Aberdeen (brother and sister); Elizabeth Telfer (19) of Douglas, and a further 19 unknown steerage passengers. Nobody died on the voyage.

It was later reported that the John Cooper departed for Sydney a month later, on May 3, 1841, with almost one hundred of “the most wealthy and respectable description, taking out an immense capital in money, besides livestock of valuable kinds,” arriving at Circular Quay nine days later, on May 12.

Of these we know only of Mrs. Blair and her daughters, who bravely continued their immensely long journey, as did Miss Pringle, and Mr. and Mrs. Spence. But they were joined by new or continuing cabin and/or intermediate passengers from Port Melbourne, namely Mr. Stewart, Mr. McDonald, Mr. Fullerton, Mr. Barrett, Mr. Robertson, Mr. Stewart, Mr. Shephard, and a further five steerage passengers. A corporal and three private soldiers of the 28th Regiment and a constable sailed also; they were responsible for escorting seventeen anonymous male and two female convicts.

I would say that the local paper’s estimate of nearly 100 of the “the most wealthy and respectable description, taking out an immense capital in money,” was an exaggeration.

Posted by Angus Trumble at 4:35 PM