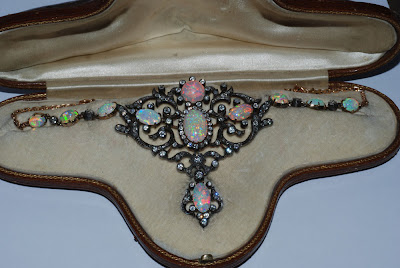 The opal exerted considerable fascination over consumers in Victorian and Edwardian Britain, yet it was also encumbered by a superstition as stupid as it was evidently recent. Perhaps this dual preoccupation was no accident. The idea of cursed gemstones pried from the forehead or eye socket of potent heathen idols and temple deities of the mysterious East was powerfully reinforced by the publication of Wilkie Collins’s 1868 novel The Moonstone, and curses in general were rich fodder for the press. Certainly a sinister evil was presumed to hover over the Orloff diamond, which belonged to Catherine the Great, and also Queen Victoria’s Koh-i-noor, though conveniently the curse of that diamond was said to apply only to male wearers. There is also the strange case of the Hope diamond, whose putatively malevolent power was exploited without shame by late-Victorian and Edwardian jewelers actually to hook successive owners, culminating with the limping Ohio mining heiress Evalyn Walsh McLean. Such superstitions were plainly bogus, and dealers, con-men, and journalists, at least the brighter ones, certainly knew it. Revolting statements about gemstones in general such as the following passage from The Great Diamonds of the World (1882), by the London jeweler Edwin W. Streeter, were nakedly self-serving in the sense that they aroused a measure of excitement—causing the general public to recoil, the better to make space for the hard-nosed but strangely pliable rich, as yet unencumbered by income or inheritance tax: “A symbol of power, the diamond has been a talisman of not less influence in the East than the very gods whose temples it has adorned. It has been the factor in tragedies innumerable, supplying the motives of war and rapine, setting father against son, blurring the fair image of virtue, making life a curse where it had been a blessing, and adding new terrors to death...” But what about the opal? As H. Kershaw Walker put it in 1904, “Whence has originated the superstition, now so widely spread, that the opal is unlucky and the cause of misfortune to the wearer?”

By the ancients it was held to exercise the combined virtues of the amethyst, ruby, and emerald, becoming moreover the type of Hope, Innocence, and Purity. Certainly its impaired reputation is not of long standing. [John] Brand, in his [Observations on the popular] Antiquities [of Great Britain, 1777], having collected together a large number of popular superstitions and beliefs, makes no reference to the opal. Even the gems alluded to are credited with good and benevolent characters. Of the turquoise an early English compiler says, “The Turkeys doth move when there is any peril prepared to him that weareth it” [Edward Fenton, Secrete Wonders of Nature, 1569, p. 51]. And again, “Corall bound to the neck takes off turbulent dreams and allays the nightly fears of children” [Levinus Lemnius, The Secret Miracles of Nature, 1658, p. 391]. Apparently the only reason for the disparagement which the beautiful opal has suffered in modern times is found in chapter xi. of Anne of Geierstein [or, The Maiden of the Mist (1829) by Sir Walter Scott], and it must be said that it is wholly insufficient and quite ridiculous. (“A Chapter on Opals,” The Nineteenth Century, 56:311, September 1904, pp. 497–8.)

The author of an unsigned article in Chambers’s Journal (7:346, August 16, 1890, p. 524)  already pointed to Anne of Geierstein as the fons et origo of the opal superstition:

Sir Walter Scott must to a certain extent be made responsible for the bad odour in which the opal has found itself of late years. In Anne of Geierstein he alludes to the belief that the Mexican opal loses its beauty when exposed to the action of water, and puts this down to supernatural agency. Hence arose the idea that to wear an opal is the royal road to all manner of ill-luck, and that as a love-token the stone shows the continuance or decline of the giver’s affections in proportion as its colours are bright or clouded. Whenever its hues suddenly changed, misfortune of some kind or another was believed to be close at hand.

The superstition about opals—that they bring ill-luck—dies hard. In fact, although Queen Victoria has taken a firm stand against it, and proves her position by making presents of opal jewelry to her friends and relatives, there are many who think that it is increasing.

I am not quite sure that by making gifts of opals to other people, and not necessarily wearing them so much herself, the Queen’s stand was necessarily proven—but let us assume that in this respect Her Majesty acted with the usual mixture of common sense and determination. Queen Alexandra and Queen Mary certainly also managed to suppress any such misgivings about wearing large, often huge diamonds. In any event, Chambers’s point about the discernible change in hue is interesting because we have long known that opals do indeed respond to extreme and sometimes relatively slight fluctuations in temperature, but more recently they have also been found to be sensitive to light in much the same way that watercolors fade as a consequence of over-exposure. This was proven lately when an opal was removed from its setting, and the edge of the stone, long covered up by the silver setting, was found to be markedly more vivid in hue than the rest of the stone. Museums therefore now display opals as if they were works on paper. So if you wear one, be sure to stay out of the sun.
Posted by Angus Trumble at 3:20 PM