A Room in Rome 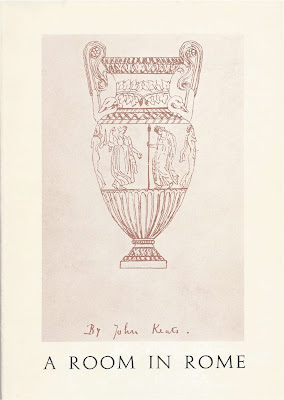 There are some books that you know are awful the moment you begin reading, but others whose awfulness creeps up on you, opening gradually in other words like some vaguely threatening tropical orchid. Many years ago I bought A Room in Rome, by the late Vera Cacciatore, sometime curator of the Keats–Shelley Memorial House in the Piazza di Spagna in Rome. This slim volume was evidently translated from the original Italian, C’era una stanza a Roma (1970), very probably by the author herself. It was not until I reached about page 9, on the train to Naples, that I realized I had chanced upon something special. The book begins innocuously enough:

One can forgive, even celebrate, an opening flourish of this kind, involving a novel fusion of anaphora, epistrophe, and anadiplosis, even when it is immediately followed by:

This continuity evinces the magic and strength of Poetry, a proof that the past is always present and ready for a future and that the peculiarity of poetry is to transmute suffering into rest, fear into charm, the vagueness and shapelessness of desire into the ripeness of fulfillment.

However, when eventually I reached page 32, I had to conclude that Signora Cacciatore was laboring under the influence of mind-altering drugs—either in the composition phase, or whilst producing the translation, perhaps both. There is simply no other explanation:

Shelley was very fond of Allegra, and, a fortnight after her death, as he was walking with his friend Edward Williams on the terrace of Casa Magni, he saw a naked child, a child very like Allegra, rise up from the sea, clapping her hands at him as if in joy. He often saw Allegra rising out of the sea in the moonlight and: “There it is again, there…” he would cry. Not only that: once he met the figure of himself walking on the terrace and the phantasm asked: “How long do you mean to be content?” Mary, his wife, thought them dreams, but Shelley would have none of it; he could not be persuaded that they were not walking visions. As a child, he was called mad Shelley…

The second half of the book is a selection of little snippets from the letters of Keats, entitled “When I am in a Room,” but here one misses Signora Cacciatore’s critical commentary, her gift for phrases that roll off the tongue like a brick, and a knack for conjuring images that linger in the mind long afterwards like marsh gas. That said, I have over the years become rather fond of Signora Cacciatore, and wish I could have had the opportunity to meet her in person. It was never to be. To me she will have to remain a name, a spell, a noose, a handle to grasp, or a form without an object.
Posted by Angus Trumble at 11:36 AM