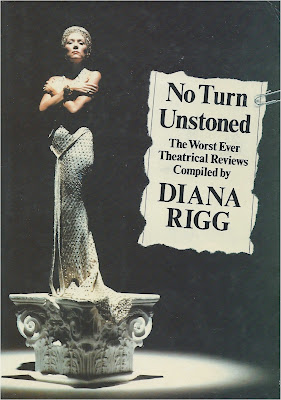 This afternoon I have been nibbling at the delicate buds that seem forever to sprout afresh from the pages of one of my favorite books, a compilation of really terrible theatrical reviews entitled No Turn Unstoned. This was the patient editorial accomplishment of Dame Diana Rigg, and we are forever in her debt. Appearing as Ariel in The Tempest at the Old Vic in April 1954, for example, Robert Hardy, according to one reviewer, “postured throughout like a stone hat-stand in a Second Empire Turkish bath.” In All’s Well That Ends Well at Stratford-on-Avon in 1959, Dame Edith Evans played the Countess “in her characteristic later manner—tranquillized benevolence cascading from a great height, like royalty opening a bazaar.” In a 1977 production of The Apple Cart Penelope Keith played Orinthia “as though she has lost the last race at Goodwood.” In Ghosts, Dame Flora Robson “accepts the news of her son’s syphilis with the air of a district nurse facing an epidemic of sniffles.” “As swashbuckling Cyrano, Mr. [Edward] Woodward’s performance buckles more often than it swashes.” “Heralded by a sprinkling of glitter-dust and much laying on of microphones, Godspell is back in London at the Young Vic. For those who missed it the first time, this is your golden opportunity: you can miss it again.” America seems to have lost the will to create and distribute acid drops of this quality, at least since the death of Dorothy Parker. One reason why the review pages today read so noncommitally may be the unwelcome but inevitable prospect of costly litigation, but I think it much more likely that most critics just cannot now come up with remarks such as this, by Clive Barnes, in a review of Rose Marie by Harbach and Hammerstein (1960): “Only one joke was applauded: ‘We are all going into the fitting room to have a fit.’ This kind of brilliance was not sustained.” Or this by Milton Shulman on Glenda Jackson’s portrayal of Cleopatra in 1978: “Except for her final death scene with Antony, she gave me the impression that he didn’t really appeal to her.” Or the remark that I cannot now put my finger on, according to which a certain actor attacked his role gamely, “but what is gameness in a man who is suffering from delusions of adequacy?” I daresay American audiences, too, are rather less critical than they used to be. Not long ago I witnessed a performance of (inter alia) Chopin’s Waltz Brilliante for piano, opus 34, No. 1, in A flat major, by Lang Lang, and the wildness of the ovation with which that bouncy young man was greeted at the end made it seem as if the quality of his playing was at the very least a foregone conclusion. In fact, it was hard to imagine how any performance could be made to accommodate more freestanding gestures of unabashed vulgarity, or notes on the printed page stretched into such a sustained fit of cloying mannerism—as if Warner Brothers had entrusted Childe Harold to the care of Mel Blanc for Looney Tunes. However, I was obviously in a minority of one, so my mind turned immediately to W. A. Darlington’s memorable remark: “Richard Briers last night played Hamlet like a demented typewriter.”
Posted by Angus Trumble at 1:48 PM