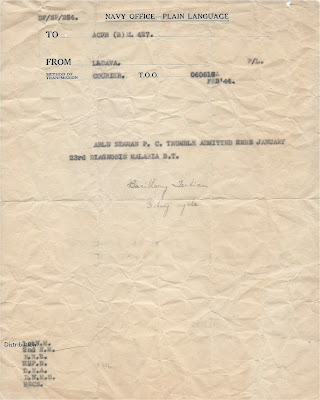 You find out things. Among the mountain of paper Mum left behind is this spare communication from the village of Ladava in the Milne Bay Province of Papua New Guinea—where by coincidence I went on a school excursion in 1979—reporting to the relevant authorities in Melbourne, and, presumably, onwards to our grandparents, that Dad was diagnosed with malaria and admitted for treatment on January 23, 1944, when he was serving as an able seaman in the Royal Australian Navy. This was just a few days prior to his twenty-second birthday. I fancy the note in pencil, explaining what “B.T.” meant, was made upon further investigation by my grandfather, Tom Compson Trumble—and I bet the information came from his brother Hugh, the eminent brain surgeon. “Bacillary tertian” was a serious form of malaria that certainly killed many American and Australian servicemen during the war, so Dad was lucky. My grandparents must have been frantic with worry. Dad obviously recovered, returned to active duty, and, in due course, retrieved the document and filed it after he was demobbed and returned to live at home in Huntingtower Road. I never knew he suffered from malaria. To the best of my recollection he never once mentioned it, and as far as I know he was also fortunate not to encounter any recurrence of the disease. As I contemplate this thing about which I knew nothing, I realize that Dad hardly ever mentioned the war in the Pacific—any aspect of it. I know he was present in Tokyo Bay aboard an Australian patrol boat when the Japanese surrendered on September 2, 1945, but I cannot recall him ever describing that or any other wartime event. He was certainly a member, and a longstanding one, of the so-called Heroes’ Club, the Toorak branch of the Returned Servicemen’s League, so perhaps with considerable self-discipline he preferred to sequester his wartime experience, and share it only with men and women who also served. That bond between them must have been very strong indeed. Still, perhaps I should have made a better effort to ask him all about it—or was there some tacit sense that he wished to protect his family from that portion of his youth, and also that his family preferred to let him do so? Perhaps there were dark aspects of it that were best left to recede, above all, I suppose, the fear and the danger and the difficult task of re-entering civilian life afterwards as if nothing much had really happened. Certainly his stone deafness in one ear was partly caused by close proximity to big guns. That much I do recall Mum telling me, so he must have seen action—in the Coral Sea, I think. But I never knew about his malaria.
Posted by Angus Trumble at 10:33 AM