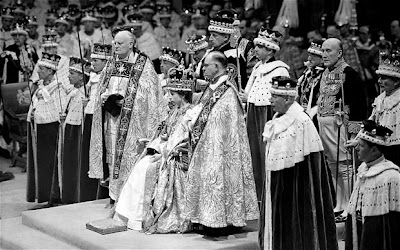 Last month in London I snatched up a DVD, newly issued to mark the Diamond Jubilee, of the J. Arthur Rank Organization’s cinematic record of The Queen’s coronation, narrated by Sir Laurence Olivier, in startling Technicolor. It has taken me a little while to make time to sit down and watch the whole thing. Having been for so many months immured in the Edwardian age, it is astounding to grasp how much closer in mood and complexion to that compact moment than one might otherwise imagine was the London of Coronation day, 1953, at least in the form devised by J. Arthur Rank. Many things stand out: the sumptuous spectacle of such a concentration of diamond jewellery—the Queen Mother’s crown without its arches; the Duchess of Devonshire’s sensational tiara; the prominence, indeed assertiveness, of the Church of England bishops’ role in the coronation rite; the grayness and total absence of what we usually call “diversity” through the huge crowds on the streets of London; the residues of empire (mostly in the form of contingents of colonial and dominion troops, and their respective prime ministers); the skill with which so many great officers of state routinely walked backwards down steps, many with trains (though H.R.H. The Duke of Gloucester had a slight wobble); the careful distinction in scale and design between the coronets worn by different ranks of peers and peeresses; the alien hairdressing—in the relatively few instances of guests in the Abbey who can have availed themselves of hairdressers at all; the fact that so many dignitaries, not just Queen Sālote of Tonga and the Sultan of Kelantan, traveled through the pouring rain in open landaus; the leanness of the English physique in 1953, the product of a decade and a half of food rationing. And there, at the center of the whole thing, is that young woman of twenty-seven—subscribing to an oath of almost inconceivable gravity, and evidently absorbing the impact of prayers such as “Receive this kingly Sword, brought now from the Altar of God, and delivered to you by the hands of us the Bishops and servants of God, though unworthy. With this sword do justice, stop the growth of iniquity, protect the holy Church of God, help and defend widows and orphans, restore the things that are gone to decay, maintain the things that are restored, punish and reform what is amiss, and confirm what is in good order: that doing these things you may be glorious in all virtue; and so faithfully serve our Lord Jesus Christ in this life, that you may reign for ever with him in the life which is to come. Amen.” How, I wonder, would you feel having that one lobbed at you in front of an audience of millions, and by a fairly starchy Archbishop Geoffrey Fisher? Only one person knows the answer to that.
Posted by Angus Trumble at 8:29 AM