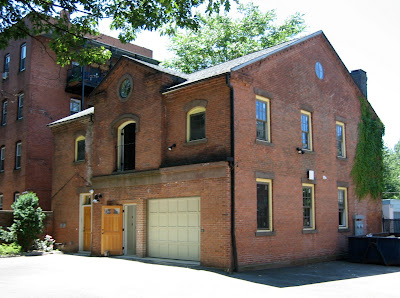 It’s nobody’s fault, I suppose, except my own. I am now all packed up and ready to move house, except I haven’t got a house to move to. The dear little flat that I am trying to buy is waiting there, but owing to some curious historical preservation matter arising from the nature and construction of the windows my lawyer tells me that the City of New Haven has seen fit temporarily to decline a certificate of occupancy, without which it cannot be sold. There’s a meeting at city hall tomorrow at which this issue may be resolved, but if it is not—and I am not hopeful—I shall then have to wait until no sooner than October 12, quite possibly longer. This will require all the patience I can muster, but at least I may have the option of retrieving my deposit and starting again. I don’t especially want to do that, and to some extent it will be for the vendor to decide how much they want to conclude the sale upon which we have agreed. Perhaps they will decide that they have a good chance of selling it to someone else for more. Good luck to them. From my vantage point the local housing market has all the vim and vigor of an Ice-Age mastodon lumbering towards a snowdrift in which to die peacefully, or a sluggish coal-burning tramp steamer with an alarming list. I am repeatedly told that it is a buyer’s market, but it doesn’t really feel like that. Among the benighted markets of America the housing market is quite obviously still the sickest of men, not merely on life support, but with metastases à go-go. Apart from those many small anxieties of moving house, there is added to these that overarching, palm-moistening fear that if it is this hard to pay cash for a not inexpensive flat in New Haven, Conn., how much harder will it be in due course to sell the damned thing? The Labor Day weekend marks the psychic end of summer, but this year I am spending it immured in a canyon of cardboard boxes, tawdry cartons of atrocious take-away food, and nail-biting anxiety. But I have not been unproductive: In an effort to distract myself I been listening carefully to the three concerti for piano and orchestra by Nikolai Medtner, in the sensational recordings made for Chandos by the late Geoffrey Tozer (at the inspired suggestion of the Hon. Paul Keating) and the London Philharmonic conducted by Neeme Järvi. The tragically premature loss of Geoffrey Tozer a little more than a year ago is something that has diminished Australia, and the world. He was a great, great artist—of the stature of Arturo Benedetti Michelangeli, Artur Schnabel, and Sviatoslav Richter. So in the end, and in the larger scheme of life and art, you have to say: Who cares about a dear little flat?

Posted by Angus Trumble at 9:14 AM