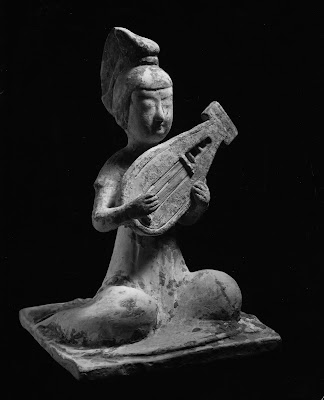 About twelve years ago Uncle John gave me this beautiful object for my birthday. He acquired it in London in the early 1970s when he was a partner in Barling and Co., a small but highly respectable firm of antique dealers in Mount Street, just off Berkeley Square. Roy Barling, the principal, used to take Chinese antiquities and works of art on consignment from the distinguished New York dealer Robert Hatfield Ellsworth, and I presume that this was one of them. Eventually for a while after Roy Barling died, Robert Ellsworth owned the London firm, but I gather not for very long. Despite my best efforts to insure the figurine was expertly packed before I moved from Adelaide to New Haven, Conn., in May 2003, sadly she got broken in transit, and I have only lately got around to having her mended and conserved in New York by the excellent sculpture and objects conservator Susan Schussler. Happily, Susan is convinced that the breaks are actually old ones.

Uncle John loved the figurine, and never sold her—partly because he became convinced that she was a clever fake. At the time he acquired it in the mid-1970s, he engaged the Research Laboratory for Archaeology and the History of Art at Oxford, who took a sample from beneath the base, and subjected it to thermo-luminescence testing. The results were not encouraging. At least that was Uncle John’s decidedly vague recollection towards the end of his life. He told me that afterwards he filled the hole with a scrap of kleenex and spit, but I cannot now find it. It must have been tiny.

Now, the consensus of opinion among specialist objects conservators and laboratory technicians has since then shifted substantially. Samples are best taken from somewhere other than underneath the base for the simple reason that bases are more likely to have been restored, mended, consolidated, or otherwise interfered with, which obviously can make a big difference to the thermo-luminescence test results. The convenient aspect of the present situation is that Susan has been able to take a new sample from inside the head, from the broken part of the neck, in other words from a spot which will not be visible when she reattaches them, and which, when tested, will be far more likely to provide reliable evidence of my figurine’s antiquity, or not.

The question is of some moment, because if she turns out to be genuine, my little musician is almost certainly a Sui Dynasty (A.D. 580 to 618) temple musician, of which Chinese archaeologists have lately excavated a number from tombs. Indeed a complete female orchestra came from the tomb of Zhang Sheng and his wife; it is dated to A.D. 595. According to my generous colleague David Sensabaugh, Curator of Asian Art at the Yale University Art Gallery, the hairstyle here may be just a little later, perhaps early Tang (i.e. early to mid-seventh century). She is playing a four-stringed pipa, a fretted instrument obviously very like a lute or a modern guitar. David suspects that the figure was originally painted with cold colors that have now disappeared from the slightly powdery surface slip.

If the thermo-luminescence results turn out to be as discouraging as the previous set, it seems likely that the figure is indeed a forgery, but almost certainly made in the early to mid-twentieth century. David does not think there was much systematic forgery in China from the late 1940s through to the end of the Cultural Revolution (other than in Hong Kong) for the simple reason that there was too much upheaval. In the 1920s and 1930s, however, temple musician figurines of this kind were indeed forged for an almost exclusively western market. Chinese connoisseurs tended to avoid them because of their inauspicious associations with death and burial, and indeed the presumption that, if genuine, they must almost certainly have been swiped from the final resting place of someone eminent or at least respectable. Alas, western taste has proven altogether less scrupulous, and quite obviously remains so.

Anyhow, Susan’s preliminary assessment is that my figurine has been heavily restored on at least more than one occasion and presumably in radically different circumstances. This could mean (a) that what remains of her is indeed genuine, or else (b) she was assembled by forgers from a stock of “authentic” ancient broken fragments illicitly harvested from tombs, in other words as a sort of palimpsest-like assemblage whose claim to authenticity is uniquely Chinese, and characteristically complicated. Hence the importance of thermo-luminescence testing, though of course an encouraging result from the new sample would not rule out this second possibility. The main and overriding point is that my figurine now seems unlikely to have been forged from scratch.

And she is beautiful. To my untrained, non-specialist eye, there is a gentle subtlety and vivaciousness in her plump face, and an charmingly affectionate disposition of the little left hand, qualities in other words that are not usually generated in the otherwise coldly calculating mind of a brilliant professional forger. On the other hand, Chinese forgers are among the cleverest ever to have thrown a brace of spanners into the thrumming machinery of connoisseurship, and their best productions may well escape notice forever. Even so, it would be odd, though not impossible, for such a subtly beautiful object to be identified as an obvious fake, or a clumsy hybrid.

Part of me hopes that that is what she is, because therefore she was not stolen from some poor gentleman’s tomb. And even if she is not a terribly compromised, much-repaired antiquity from the Sui or early Tang dynasties, I love my little pipa player, as Uncle John did, and she will henceforth preside over my dining room, serenading his merry ghost, together with Jim Lawson, Aunt Anne, Uncle Henry, gusty old Uncle David, Gran, Nan and Pa, and of course Dad and Mum, all of whom are just now getting ready to move house with with me.

Posted by Angus Trumble at 1:26 PM