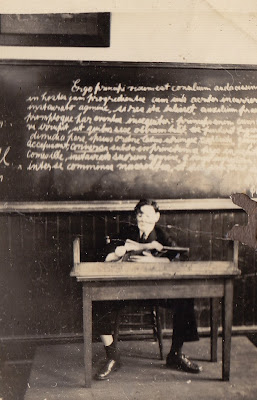 I have come across my old Melbourne Church of England Grammar School reports. According to Miss Cameron, writing at Grimwade House in 1970, when I was six, “Angus brings many books for us to read. He is most responsive to the rhythm of words and can join in the saying of many poems. He writes down many stories for our enjoyment…His drawings and paintings are especially interesting, being both colourful and imaginative. He has some excellent ideas for creative work and he gets much pleasure from the things he makes.” In conclusion, Miss James remarked: “Angus now smiles much more readily, and seems much happier in a big and busy school.” Two years later, Miss James’s assessment continued to be upbeat: “Angus is a quiet, hardworking boy who always gives of his best. He has completed an excellent third form year.” In the same year Mrs. Fairbairn saw fit to write: “Angus’s work in divinity has been excellent throughout the year. He shows particularly good understanding of this subject and well deserves his Rusden Scripture prize.” Now, interestingly, my dear brother Hamish also won the Rusden Scripture Prize, nine years earlier, as did our beloved father some forty years before that. Not long ago Hamish told me that Dad was awarded the Rusden Scripture Prize for an impressive essay about his great uncle Harry, whose life was taken by heathen savages in New Caledonia whilst engaged upon missionary work—an outrage that apparently prompted the punitive expedition of H.M.S. Psyche. Alas, his account was not accurate, because it seems that Great Uncle Harry actually died of injuries sustained in a pub brawl somewhere in Queensland. The casus belli on that occasion was missionary work of an entirely different character, in connection with a married lady, and a heated discussion arising from that between Great Uncle Harry and the married lady’s cuckolded husband, a cane-cutter. Dad’s mistake was an honest one, and I do not know if Pa took any steps to clarify this delicate matter with the school authorities. Certainly the prize was never rescinded: I have it now, a fine hand-tooled edition of Weigall’s Nero.

Posted by Angus Trumble at 9:54 AM