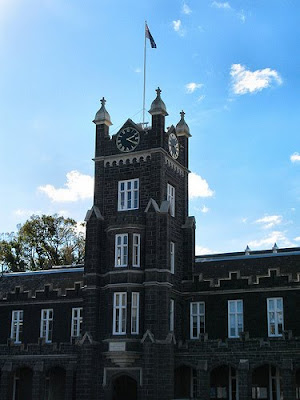 It breaks your heart. At the end of first term in 1979, in the grand tradition of total denial, Messrs. Hallo and Smith wrote: “I have been pleased to see that he has improved his relationships with his fellows and now appears to be enjoying school life more.” Mr. Creese, the headmaster, then piped up: “He seems to be happier.” At that point I had never even met Mr. Creese, so one wonders upon what basis he conjured this rosy, and totally inaccurate picture. At the end of first term in 1980, Mr. Nethercote (economics) wrote: “He could do very well but it would be pleasing to see him ‘free up’ and become more relaxed towards his learning and class involvement.” In his form master’s report at the end of that year, Mr. Brumley wrote: “Despite his difficulty with human relations he remains polite and cheerful.” He was right about being polite and cheerful; I got very good at that, but there it is again: “difficulty with human relations,” as if that were a matter of incapacity, or lack of focus, and not aggravated sexual assault! Mr. Rosenhain (mathematics) chimed in with “He lacks a little confidence but he does have ability.” Major Morton (French), meanwhile: “He lacks confidence however in speaking the language, and this seems to worry him; which it need not do.” Mr. O’Brian (music) broke into intimate typescript with “This student needs to work on his snare drum rudiments. His work on the timpani could also do with more control in the roll area.” Quite. What on earth did any of them really think was going on? Who read these reports in their entirety, and wondered if perhaps a little further investigation might be warranted—beginning with a quiet word to me? By the end of 1980 that would have yielded much evidence of criminal misconduct, so maybe they just thought it safer not to ask. And what should one now do with these bleak, mostly handwritten documents? Shred them, burn them, or send them back to whichever of the authors are still alive, together with an icy covering note?

Posted by Angus Trumble at 1:15 PM