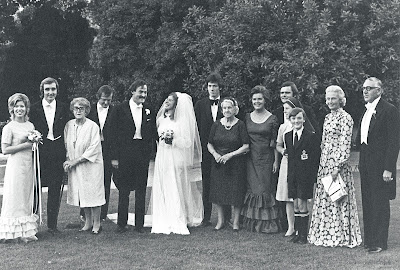 Patricia Rofe has died. She was remarkable. I first met Pat when I was ten years old, and I have a vivid recollection of that occasion. It was after a game of football in Adelaide—surely Simon must have been playing; we were visiting him there. In the lengthening shadows, with the rich fragrance of clods of mud and football boots hanging in the damp, chilly early evening air, both teams, with corresponding girlfriends, families, friends, coaches, umpires, spectators, and hangers-on, repaired to the warmth and light of the old weatherboard pavilion for cocktails, and there, sitting in a fur coat at an ancient upright piano, Pat was good-naturedly accompanying everyone in a rousing set of sporting and other songs. She played with flair, and a sunny smile. Quite obviously everybody loved her. I had never seen anything remotely like this, and actually that pattern has continued in the thirty-five years since. Here she is, our hostess, at the wedding of my brother Simon to my sister-in-law Mary Ann. Pat wore red, and is sixth from the right. When at length I returned to Adelaide to work at the Art Gallery of South Australia, Pat was infinitely kind to me, and also did me the honor of attending some of my talks and lectures. In the middle of one of these, I referred to the English custom that continued long into the Edwardian period of letting the hair of little boys grow long until they attained the age of seven or eight, and of putting them into smocked dresses. When you lecture with slides, your audience is usually invisible—but out of the gloom came the welcome sound of dear Pat in the front row, laughing like a drain. She raised two sons and three daughters pretty much on her own—her husband, a pioneering rocket scientist, died far too young—and Pat dwelt in a world (she really created it) in which every single person except Don Dunstan was interesting, or fun, including the ambulance man who attended her when a few days ago she left her beautiful house in Kensington, knowing full well that it was for the last time. Pat was the grandmother of second helpings and, I suspect, contraband. She detested flying; the Overland has lost its principal income stream. Her politics were robustly conservative, but she loved the Jesuits. And they loved her. Pat played an occasionally flamboyant game of bridge, and also fibbed outrageously about her age. No document, however official, may ever be regarded as a sound measure of it. She was a stalwart of the Adelaide archdiocese, and has, I assume, gone straight to Heaven. May light perpetual shine upon her.

Posted by Angus Trumble at 8:35 AM