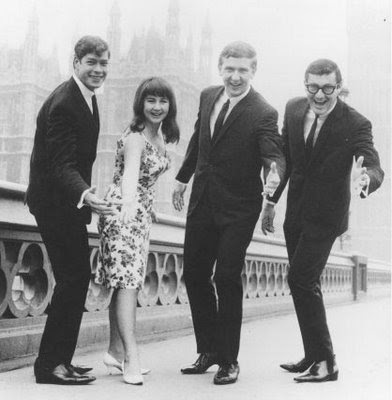 I wonder how many other expatriate Australians from time to time fossick in their reticules, scan their shelves or, these days, rummage about on the internet and take a moment to listen to The Seekers’ cover of the old Peter, Paul and Mary number “Five Hundred Miles” by Hedy West? I find their recording infinitely preferable, supplanting as it does the durge-like mournfulness of Mary Travers with the much higher register, bell-like purity and warmth of the young Judith Durham. Whether for British or even domestic consumption, The Seekers also made some intelligent adjustments to the lyrics, which I transcribe here exactly as they sang them on their 1964 breakthrough record The Seekers, of which we certainly had a copy at number 18, and for as long as I can remember. That’s the one with this slightly clunky photograph on the sleeve. It was taken on Westminster Bridge, bless them, with the side of the Clock Tower of the Palace of Westminster barely visible through thick 1960s smog in the background, to the right of Athol Guy’s spectacles. I remember as a small child being wholly fixated by Judith Durham’s snappy little shoes.

Note the especially charming soft Australian pronunciation of the words “blow,” This is one of those cases of a spiritual-leaning folksong that has dated, certainly, but in all the right ways. Trains with whistles? Pennies? Incidentally, I still have one, with its splendidly modeled bas relief kangaroo leaping on the verso—and a tiny seven-pointed star of Federation, low on the notional horizon, just above the paw. You didn’t notice that, did you? In America they still call the one-cent piece a penny, but we haven’t had them since decimal currency was introduced on February 14, 1966, and of course Australian one- and two-cent pieces bit the dust in 1990.

Anyhow, for those of us who occasionally wake up early in the morning positively startled by the fact that we are no fewer than 10,372 long, long miles away from home, “Five Hundred Miles” and The Seekers tug powerfully at the heart-strings.

Posted by Angus Trumble at 6:56 AM