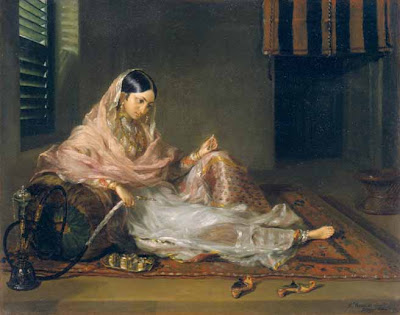 Francesco Renaldi was an English-born painter of Italian heritage about whose life little is known. He entered the Royal Academy Schools in London in 1776, aged twenty-one. For two years after 1781 Renaldi traveled in Italy, initially with Thomas Jones, the Welsh landscape painter and pupil of Richard Wilson.

Evidently on at least one occasion Jones exploited Renaldi’s name to pass himself off as an Irish catholic in order to gain access to the prior of a monastery at Caserta near Naples—which would normally have been inaccessible to him on sectarian grounds—but Renaldi seems to have accepted this with good grace, even affability. Years later, in 1798, he exhibited at the Royal Academy a workmanlike but affectionate group portrait of the Jones family, which is now in the collection of the National Museum of Wales in Cardiff; it may contain the artist’s discreet but cheerful self-portrait.

Upon returning to London in 1783, Renaldi attempted without success to establish himself as a portrait painter at 2, Portugal Street, a modest house tucked behind Lincoln’s Inn Fields, on the Thames side. On November 3, Jones was pleasantly surprised to bump into Renaldi in Fleet Street, and the two dined together not long afterwards.

In 1785, perhaps frustrated by commercial sluggishness, even sensing the prospect of professional failure in a highly competitive metropolitan market for portraits, Renaldi applied to the East India Company for permission to travel to Bengal. He supplied the names and addresses of two guarantors—Mr. Job Hart Price of Aldershot House, and Robert Codd of the 59th Regiment of Foot. These sureties were obviously acceptable to the company, because the following February Renaldi was given formal approval to go. He sailed aboard the Hillsborough, and reached Calcutta in August 1786.

For ten years Renaldi lived in Calcutta, Lucknow (working, it is believed, for نواب آصف الدولہ Asaf ud-Daulah, the Nawab Wazir of Oudh), and in Dacca (now the capital city of Bangladesh). He was therefore one of only a relatively small number of European painters—among them William Hodges, Johan Zoffany, Tilly Kettle, and Ozias Humphry (all of whom are represented in the collection of the Yale Center for British Art)—who spent extended periods painting portraits of and for the nabobs (English, Scottish, and Anglo-Irish gentlemen of the East India Company whose tendency was to “go native”) and their more or less official Indian mistresses, or bibis. This painting is a fine example of the latter.
This portrait represents a young Muslim bibi reclining on an expensive carpet, propped up on a plump cushion in a corner of her small, private house, known as a bibi khana. She contemplates the elaborate jewel in her left hand, probably a pendant necklace. By her side there are a few other beautiful objects—the hookah; the paandaan, or silver tray with cruets containing a soporific preparation made from betel-leaf, and her casually discarded jutis, or slippers with the elaborately upturned toes.

The fine, layered formal costume consists of a fine peshwaz or kurta (a kind of loose shirt or tunic) with an inner layer made of gold brocade patterned with buti, a design of orange and green. Her peshwaz has a fine white gauze veil. The dupatta, meanwhile, a double-sided scarf or shawl, is made of fine, dusty rose muslin edged with silver-threaded gota, or ribbon. The jewelry is delicate and plentiful, and includes several necklaces, numerous bracelets, large earrings, a wide slender hooped nose-ring, rather heavy anklets, and gold rings on all of her toes, and on most of her fingers (some sporting substantial gemstones).
Judging from the angle of the shadows cast by the shutters on the left, this scene evidently takes place in the late afternoon, that hottest and most oppressive time of the equatorial day—the sun never sets much earlier than approximately 5.45 p.m. (in January) or later than about 7.00 (in August).

In the postcolonial context, one is tempted to interpret this bibi’s focused gaze towards that fine jewel as a sort of rumination upon her own standing as an item of great luxury, a rare commodity, installed for the nabob’s pleasure upon the periphery of Anglo-Indian society in the time of Warren Hastings.

However, it is worth noting that very often the relationship between nabob and bibi was lasting, respectful if not sincerely affectionate, and sometimes involved the eventual bequest of substantial property (i.e. from nabob to bibi). And despite their unofficial domestic status and the impossibility of marriage, bibis could nevertheless be quite comfortably accepted (on both sides of the racial divide) as being of “good family.” Indeed, some were even minor members of the princely houses. Unfortunately we know nothing at all about the identity of this particular bibi, nor indeed the nabob for whom Renaldi painted her portrait. According to an inscription, it was painted at Dacca in 1789.

Recent scholarship has hardly begun to gauge the strands of influence flowing out of the studios of western artists in what were then called the “presidencies” of Bengal, Behar, and Oudh—and thence to the workshops of indigenous Indian court and other local painters who evidently admired, or at least for whatever reason sought to emulate them. However, we are beginning to see that western materials, techniques, and styles of representation stimulated widespread imitation among Bengalis, with rather mixed results.
By 1796 Francesco Renaldi was back in England. To the following year’s summer exhibition at the Royal Academy he sent paintings of two Industany ladies, and one Mogul lady—all three were presumably bibis, possibly including this one—and also listed his address as 69, Margaret Street, Cavendish Square, very close to what is now Oxford Circus. In 1798 he may have exhibited a portrait of his own family, about whom we know nothing.

Thereafter he vanishes from view, but completely.
Posted by Angus Trumble at 3:10 PM