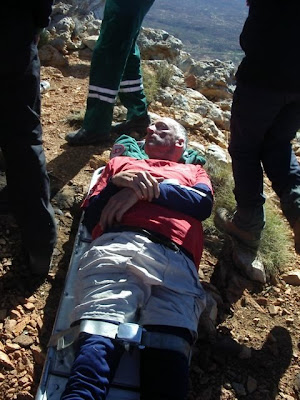 The week before last my eldest brother Nick had a temporarily incapacitating stroke whilst hiking with his wife Lesley and a group of fellow travelers in the MacDonnell Ranges not too far distant from Alice Springs in the Northern Territory.

It came on quite suddenly, and within an hour or two Nick was completely paralyzed down the left side, and stranded near the summit of a high bluff. He had to be rescued by helicopter, and because there was only room for Nick’s stretcher on board, the pilot, and a nurse, poor Lesley had no option but to continue hiking with the rest of the group until she could be driven into Alice Springs from the camp site later that night. She must have been frantic with worry.

Nick himself was pretty alarmed, too, because I gather the emergency room at Alice Springs Regional Base Hospital is quite bracing, even at the best of times. He recalls seeing beyond the hem of the green curtain next to him a pair of feet dangling over the edge of a neighboring bed—wearing ankle chains. On the other side, a Territorian policeman was piecing together a statement from an Aboriginal woman with two broken arms.

It is a measure of how much, or how little, actually happens in Alice that this shot of Nick appeared a few days later on the front page of the local newspaper, the Centralian Advocate. Mum was not at all pleased: “Couldn’t they have found a better photograph?”

Simon rang me with the news. By a strange coincidence he and his wife Mary Ann had been on a separate but rather less strenuous hiking holiday in the vicinity, and were able to see Nick in hospital upon their return to Alice. Fortunately, we have learned to preface any and all such disclosures on the telephone with the umbrella statement, “Everything is going to be all right,” but even so it was a shock.

Nick is fourteen and a half years older than me; Simon twelve and a half, and Hamish nearly nine. Actually there has never been a time when all three of my brothers have not loomed overhead, either physically (at first) but, in a larger sense, psychically also, as fully-fledged, remarkably talented adults, as different from each other as, indeed, I am from all three—although these days I think we are gradually beginning to notice the slightly unexpected similarities: more than a few vestigial remnants of Peter.

Simon was married well before I left prep school; Nick before I left high school, and Hamish soon afterwards. My eldest niece, Lucy, was born shortly before my tenth birthday. So I had the benefit both of growing up as a kind of only child, my long-suffering parents’ one-boy second family, if you like, and also the excitement and stimulus of belonging to a big family of much older siblings and their indulgent girlfriends, not to mention exotic uncles and thrilling aunts, all of whose whose dinner-time and summer holiday conversations, to which I listened intently and with pride, provided fascination—and also much to emulate.