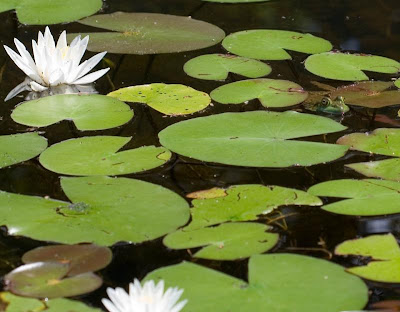 This morning I came across one of my old Latin exercises from years ago. In it, Reginaldus asks “what does the following sentence have to mean: ‘AEQVAS RARA INTER COAXAT RANA AQVAS’?” The answer: The rare frog croaks among level waters. These days I’d probably make an adjustment in the interests of English prose style and, notwithstanding the unequivocal meaning of aequas aquas, and Reginaldus’s larger point, which is that there can only be one meaning in this case—level waters, plural—opt instead for The rare frog croaks amid still water. The beauty of this simple Latin sentence is that the (to us) out-of-sequence word order actually reinforces its poetic meaning by beginning with a sort of floating adjective, level, that must wait until the very end before it joins up with its noun, in this case waters. Thus level... waters enclose the verb and its subject, the two parts of which, rara... rana, in turn orbit coaxat like planets around the sun. It is as if the arrangement of the words themselves reflect that lonely frog’s croak radiating over a calm pond. Just brilliant.

In English we are stuck with the relatively primitive, overriding stricture of word order, left to right. Everything is more or less governed by that. The dog bites the cat means one thing, and The cat bites the dog means the opposite. German is not so constrained. Der Hund beißt die Katze and Die Katze beißt der hund both mean the same thing: The dog bites the cat. Unlike Latin, the nominative and genitive cases are indicated in German by the form of the article. That’s why Die Katze beißt der hund can only mean The dog bites the cat, and not the other way around—in which case it would have to be Die Katze (subject) beißt den hund (object) if the cat were doing the biting. However, with Die Katze beißt der hund the word order implies a strong shift in emphasis, as if to imply with a degree of Teutonic impatience: Nein, Dummkopf: it’s the cat that the dog is biting, and not the parakeet. Somewhere along the line the English abandoned that kind of flexibility, and the rest of us are now living with the consequences. As a kind of word-order equivalent of Die Katze beißt der hund, we are obliged to take up those dreadfully blunt weapons of the passive voice and the gerund, and bludgeon our way towards something as hideous as The cat is being bitten by the dog, which, in any case, does not mean quite the same thing.

Posted by Angus Trumble at 8:43 AM