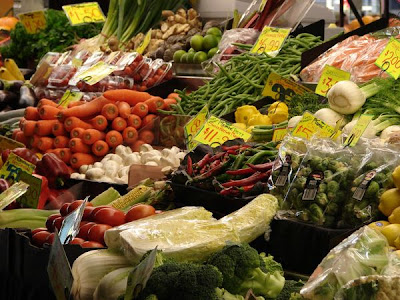 A stray recollection about Melbourne this morning has brought into vivid focus for me a curious aspect of daily life in the United States of America. Here, people distinguish between “markets”—meaning those virtual rock pools left behind by the vast ebb and flow of capital; the surging tides of the national, indeed the global economy, and the mighty forces of demand and supply, as in “the stock market” or “the commodities market,” for example—and “farmer’s markets,” where mainly in the big cities some people buy their fruit and vegetables, without necessarily ever having seen a real farmer. At home, “the market” means both, on the very reasonable principle, I suppose, that the same gigantic forces that are discernible in one are essentially an amplification of what happens where you buy your carrots. In other words, the American idea of “the farmer’s market” strikes we Australians as distinctly precious, especially at first. Years ago, just after I arrived in New York City, someone commended to me with breathless enthusiasm the farmer’s market in Union Square, for which I duly searched and searched before realizing at length that that was all there was—a sort of wilting, rather small gypsy encampment. In our part of Melbourne “the market” meant the Prahran Market, which, compared with Union Square’s, is simply enormous—a lofty hangar built of cast- and corrugated-iron, attached down one side to a fussy Victorian brick-and-stucco façade on Commercial Road with clock-tower and turrets. When I knew it, the paved interior was divided into aisle upon seemingly endless aisle of boxy stalls piled high with fresh fruit and vegetables; densely crowded with Chinese market gardeners, Greek and Italian greengrocers, tattooed egg-sellers, and hefty fruiterers clattering barrows laden with melons, pineapples, cases of Riverina oranges, etc., all crying specials at the top of their lungs, and, incidentally, using only rudimentary mechanical hanging scales, razor-sharp mental arithmetic, and no cash registers at all. On market days they juggled thousands and thousands of shoppers in a single morning, and did so with amazing efficiency—before repairing to the local pubs in the early afternoon. As a very little boy, I used to go with Mum to the market, riding inside her shapely upright wicker basket on wheels—only vacating it most reluctantly when the iceberg lettuces, red onions, string beans, cabbage, granny smiths, and hands of bananas piled up over my knees. I’m pretty sure that Hamish did exactly the same thing before me, and from him therefore I inherited a special privilege accorded only to a very few of Mr. Mathewson’s best customers. Mr. Mathewson was our butcher. For years and years, Mum’s loyalty to Mr. Mathewson was rock-solid. The butchers, poulterers, and fishmongers occupied a more satisfactorily enclosed avenue of shops adjacent to the market proper, extending at right angles to Commercial Road. Each shop had a cool room behind, a huge timber chopping block on which apron-wearing apprentices noisily demolished whole carcasses before your very eyes, and a shallow, refrigerated stand or icebox at the front brimming with sausages, livers, kidneys, hearts, ox tongues, hams, legs and shoulders of lamb, forequarter slabs of beef, and trays piled high with stewing steak. Entering from the Commercial Road end, Mr. Mathewson’s shop was the second on the left. Along with the vast quantity of meat with which he kept us supplied every week for several decades, sometimes several times a week, Mr. Mathewson took the trouble—first for Hamish, then for me personally—to assemble a sort of amuse bouche consisting of one or two little pork sausages, a miniature piece of steak, maybe a kidney, or a lamb chop (those meltingly little ones), and roll them into my very own brown-paper packet tied with string. He wrote my name on it with a thick wax-pencil—ANGUS—and added the flourish of a lightning-quick sketch of a big black rat with a long tail, and huge whiskers. I’m not sure Mum approved of the rat, but the gesture was one of characteristic kindness and good cheer. Today he’d probably be arrested. Anyhow, he gave it to me, me, and I had at least some of the contents for my dinner, with peas and buttery mashed potato. Now I seem to recall that somewhere along the line one of Mr. Mathewson’s apprentices, or maybe even one of his sons (possibly both), became a celebrated star of the Victorian Football League, the forerunner, of course, of what eventually turned into the A.F.L. I must ask Simon, because he will know. Of course, these days children in big American cities are far more likely to collide with what they laughingly call a “market analyst” or a telemarketer than a proper butcher, or a genuine farmer.

Posted by Angus Trumble at 2:56 PM