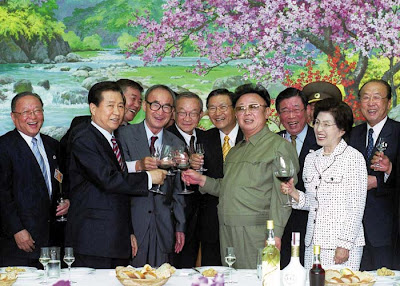 News of the demise earlier today of Kim Dae-jung, sometime President of South Korea—from what is described in Seoul as “multiple organ dysfunction syndrome,” in other words death—has once more focused attention on the anonymous artist responsible for those murals north of the border. Let us call him the Master of Pyongyang. This painter has evidently been active since at least before 2000, when, pursuing the so-called “sunshine policy” of engagement (햇볕 정책, Haetpyŏt chŏngch’aek), Kim decided to meet Kim, and was duly awarded the Nobel Prize for Peace. At length the other Kim reneged on his promise to pay a return visit to Seoul, a quid pro quo for which Kim is rumored to have paid Kim sums amounting to $500 million (about 750 times more than the 4 million Swedish kronor forked out by the Nobel committee), so the rapprochement fell rather flat. The crashing breaker mural we saw earlier is generally used for formal portrait photograph opportunities, Kim with Kim, Kim with President Vladimir Putin, Kim with President Bill Clinton, and Kim with whomsoever Kim can persuade to pay an occasional visit. The lunch mural, for want of a better title, strikes an altogether different chord—that of an evacuated spring-blossomy babbling-brook alpine hinterland glorious people-scape, in which the principal technical challenge for the artist was to crank up the volume of the foliage and the foreground blossoms, whilst reining in the waters, because for obvious reasons the plash and gurgle of cataracts can be counterproductive at lunchtime. However, in striving to achieve an appropriately soothing effect by suffusing the waters with a sort of pale milky blush of eau de nil, the better to slow them down, even warm them up a bit, most unfortunately the Master of Pyongyang creates the impression here not of a glacial burn or torrent fed by thawing snow, but rather the cloudy, acrid run-off from some unseen nuclear research facility a little way upstream. I gather this is what Kim, the Kims, and the South Korean delegation were laughing about so heartily in this charming informal group photograph.

Posted by Angus Trumble at 5:37 AM