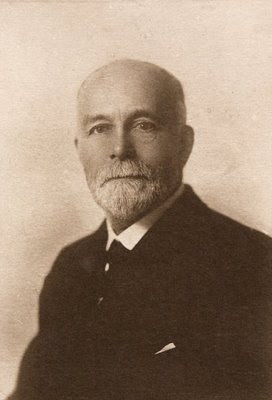 Our great-grandfather, the Hon. William Pearson, M.L.C. (above), was one of three members of our mother’s family who, between them, served in both houses of the legislature in colonial Victoria and, in the case of the Hon. Alexander Hay Borthwick, M.L.C., immediately before and during World War II. I had hoped that a discreet survey of their various speeches, faithfully recorded in the relevant early volumes of Hansard, might yield gleaming nuggets of oratory; reveal brave stances on imperial and colonial matters, or further evidence of probity, brilliance, and statecraft. However, the pickings kindly proffered by the Parliamentary Librarian in Melbourne turn out to be decidedly slim. I fear the political activities of the Hon. William Pearsons (father and son), and of Uncle Lex Borthwick, were of but marginal interest in the life of the nation, and the Empire. This is hardly surprising; indeed it conforms to a forlorn pattern of under-achievement. In the younger William Pearson’s case, as is suggested by the immense, handwritten, creamy foolscap document in which in 1896 several hundreds of his neighbours formally urged him to stand for election to the Legislative Council seat for the Province of Gippsland—the signature of great-grandfather Lieutenant-Colonel William Borthwick, V.D., of Bald Hills, is fourth on the list, followed several spots down by Mr. Pearson’s father-in-law, George Cornelius Gooch of The Fulton, Sale—the property qualification of the electors to the upper house (which, incredibly, persisted until 1950) insured that our great-grandfather’s sole function was to represent the landed interest. This he appears to have done, through thick and increasingly thin, as the Depression of the 1890s carved, blew, and flooded its way across stations on the coastal plains that stretch between Traralgon and Orbost, and between the Great Dividing Range, the Gippsland Lakes, and the Ninety Mile Beach. It may also have been useful for Mr. Pearson to have access to the luncheon room, and indeed those fellow members of parliament, particularly ministers of the crown, whose influence might be of benefit to him and his fellow directors in the discharge of their responsibilities on the board of the gradually ailing and soon-to-be liquidated Long Tunnel Gold Mine at Walhalla. When travelling up to Melbourne for sittings, great-grandfather Pearson caught the Sale train by waving it down with a red flag at his own private railway station at Kilmany Park. That pretty little weatherboard building is today preserved at Old Gippstown, the Gippsland Heritage Park at Moe (rhymes with blowy) near Morwell in Victoria.
Posted by Angus Trumble at 4:55 PM