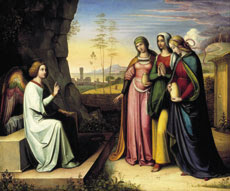 Is there any more confusing aspect of the New Testament insomma as sifting and separating the women called Mary—especially as they converge upon Holy Week? As I see it, there are at least eight, presided over by (1) Mary the Virgin, Mother of Jesus, whose identity is mercifully unequivocal throughout. This is a blessing, and not only in the dogmatic sense.

Then there are three Maries, two of whom are almost certainly one and the same person, but not necessarily, maybe even all three are synonymous: (2) Mary, known as the mother of James and Joses (Matt. 27:56); (3) “the other Mary,” who, because she follows only a few lines later at 27:61, seems almost certain to be the same mother of James and Joses, and (4) Mary, the wife of Clophas (Jn. 19:25).

The next two Maries are often conflated because of the sticky issue of anointing, but at different (and very famous) moments retain fundamentally separate, indeed vigorously three-dimensional personae, exceeding even many of the twelve disciples in symbolic and poetic intensity: (5) Mary of Bethany, the sister of Martha and Lazarus (Lk. 16:38–42, Jn. 11:1 ff.), and (6) Mary Magdalene (Mk. 16:9, Lk. 8:2). In some respects both of these Maries are of greater importance than all the others except for the Virgin Mary, and it is odd that there should have existed in the earliest centuries of Christianity any uncertainty or confusion as to their respective roles and identities.

The name Mary derives from the Hebrew Miriam, as in the sister of Moses and Aaron in Exodus, but it seems to have been in widespread use in Palestine in the late first century B.C. not so much because of this distinguished provenance, but because of the far more current influence of Miriam, the queen consort of Herod the Great.

What is especially puzzling about all this is that the Gospel witnesses rarely feel the need to make a more convincing effort to avoid what by any measure is an apparently unnecessary source of great confusion. It seems somehow counter-intuitive for no fewer than three Maries to be present with Jesus at Golgotha, and two (with Salome) at the empty tomb, unless, of course, that is precisely what the Gospel-writers urged us to know, understand, and accept.
Posted by Angus Trumble at 3:02 PM