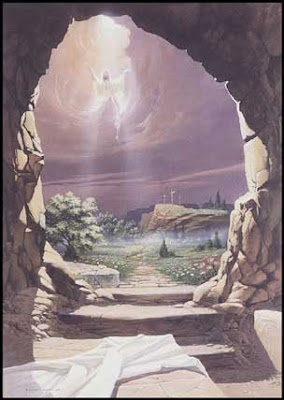 It is an anomalous aspect of the Easter miracle that in our troubled era it has generated works of art of scarcely conceivable hideousness (above)—mostly concocted as “faith aids,” and generally missing all but the crudest aspects of the pertinent Gospel narratives.

Yesterday a good friend and colleague of mine reminded me of one of the most striking and memorable features of the “morning of the third day” discoveries in John’s account, which relies for its startling vividness upon the fact that “the beloved disciple” himself evidently beat Peter to the empty tomb in a sprint, though it is Peter who actually enters it first. What they see there is described with such meticulousness and specificity that within the broad parameters of John’s highly sophisticated structural edifice it deserves much scrutiny.

According to the New International Version of the Bible, an exceedingly popular Protestant translation produced by biblical scholars in America in the 1960s:

Then Simon Peter, who was behind him, arrived and went into the tomb. He saw the strips of linen lying there, as well as the burial cloth that had been around Jesus' head. The cloth was folded up by itself, separate from the linen (20:6–7).

Folded—a particular action of somewhat calm and methodical character. Something about this did not ring true, so I went to King James. There, the same passage is translated:

Wrapped, carrying the hint of a more cursory gesture—discarding something unwanted. The Revised Standard Version (English) of 1928 gives it still differently again:

Then Simon Peter came, following him, and went into the tomb; he saw the linen cloths lying, and the napkin, which had been on his head, not lying with the linen cloths but rolled up in a place by itself.

Now it is in the Greek text of these verses in John that we find the most breathtaking measure of poetical intentionality, because the relevant participle of the ancient verb κειμαι means (variously) stretched out, lain down to rest, in repose, lying sick or wounded, lying dead—often unburied (as of human corpses specifically) and, as in English (somewhat eerily) laying down, in the sense of mounting an argument, or laying down the law. In other words the Greek seems to encompass a profound complexity of meaning as regards the placement ( if that is the right word) of the head cloth, napkin, or, in fact, the σουδαριον/sudarium (in essence the same word, evidently a technical term in the repertoire of near eastern undertakers in Roman-occupied Palestine). More than this, however, as my wise friend and colleague now points out, laying aside the cloth which now, in a sense, lies “dead,” recalls the earlier moment in John (10:17-18) where Jesus talks about having the power to lay down his own life, and the power to take it up again.

Now, it seems to me that the Vulgate does a very ingenious thing by translating κειμενον as positum (–us) (from pono) simply “put” or “laid,” but linking this basic term to εντετυλιγμενον by choosing involutum (involutus, –a, –um), which means literally hidden, obscured, or veiled. Thus Jerome emphasises the crepuscular setting, and a certain psychic distance opens up between shroud and sudarium. Yet coming from the verb involvo, –uere, –ui, –utum, the curiously fugitive sense of involutum also carries the sense of moving in a circle, being wrapped or rolled, coiled, curled, or wound up. In other words, if plain old positum suggests that this was not one of Jerome’s Mozart days, certainly his choice of involutum brings us back to the full and urgent subtlety of the Greek—a small stroke of genius echoing from the ancient Mediterranean world with the clarity of a little bell of perfect pitch.
Therefore I feel King James and the R.S.V. got it as right as it is possible for our deeply clumsy language to get it at all, and whoever lately proffered “folded” as an adequate substitute in the New International Version was either applying to the Greek and Latin verbs maybe a greater unconscious awareness of the methods of the industrial laundry than was justified, or else had no idea what he was doing—just as whoever dreamed up that insulting, yellow-brick road vision of the risen Christ hovering some distance away from the empty tomb, utterly failed to grasp the whole point of the Resurrection.
The main thing, of course, is not how the head-cloth was left behind, but that it was deliberately deposited somewhere else: Here is the risen lord, moving from A. to B., doing something with his hands, then emerging bodily into the light of dawn to commence His fifty days in the world. It is the far, far more beautiful, satisfying, indeed mystical image.
Posted by Angus Trumble at 8:33 AM