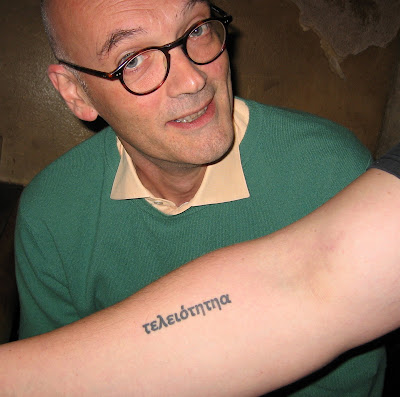 Being a dark horse, Dan has cleverly led me astray this week. Not knowing any better, I went straight to Liddell and Scott in search of an accurate and, hopefully, enlightening definition of τελειότητα, the Greek noun neatly tattooed on his forearm (above).

As an up-to-date young man with contemporary tastes, naturally I should have known that Dan would opt for the modern Greek, and not ancient. My mistake.

However, in this instance the long and winding road that leads from the Classical world to Dan’s forearm is worth setting out in some detail, in case he should from time to time need to answer urgent queries from persons wishing to becoming more intimately acquainted with it.

Our saga begins in Attica, the region around ancient Athens, where by the fifth century B.C. the adjective τέλειος or, more commonly, τέλεος meant complete, perfect or entire, and, more specifically in relation to animal victims of religious sacrifice or burnt offering: fully-grown, and/or without spot or blemish. We see how already this is strangely relevant.

The primitive and very ancient root τέλειος already appears in Homer (possibly around the eighth century B.C.), but τέλεος took firmer shape in primitive Greek, that is the “Doric” language, segued into the Attic dialect (around the early sixth century B.C.), and subsequently makes numerous walk-on appearances in the very hieratic, formal language of the fifth-century B.C. tragedians Aeschylus, Sophocles, and Euripides.

From this the feminine noun τελειότης, τελειότητος, and τελειότητη sprang into being as an abstract philosophical term (these different forms of the word depend on whether it is being used as the subject, object, etc., of the ancient Greek phrase or sentence).

That term crops up cheerfully in the works of Aristotle (the Physics, 207a:21, and the Nicomachean Ethics, 1153b:16) and in Plato, specifically in the late dialogue Philebus (67a) in which Socrates speculates on the nature of the relationship between pleasure and knowledge, in my view the perfect combination.

Τελειότης, –ητος, –η also crops up in the so-called Definitions (412b), which possibly may not have been written by Plato at all—better to say ostensibly Plato, or even Pseudo-Plato. Regardless of that, in the mental universe of Aristotle and Plato, τελειότης, –ητος, –η certainly meant completeness, wholeness, or, for want of a better term, perfection, especially, it seems, in relation to persons.

With surprising resilience this handy word survived the ensuing centuries and made a soft landing in the Septuagint, that is, the oldest known Greek translation of the Hebrew Bible (3rd–1st century B.C., most probably written out by Greek-speaking Egyptian scholars at Alexandria). There it is, sitting nicely in their version of what we know as the Book of Judges, 9:16.

Τελειότης, –ητος, –η also makes it into plenty of other later sources, including Democritus Epigrammaticus (187), the Greek-speaking Roman physician Galen (1:315), and, apparently only ever once in the plural, in a book by a person called Chrysippus Stoicus (3:61), for whom, in the third century B.C., it was all right to imagine that there could be various “perfections,” and not one only. Who knew?

Crucially, perhaps, τελειότης, –ητος, –η insinuates itself into St Paul’s Letter to the Colossians—the Apostle was nobody’s fool. On the other hand Paul may not be the author of Colossians either, but let us not get too bogged down with trivia.

In Colossians the term is deployed with great subtlety in relation to the various Christian virtues, viz.: έπί πάσιν δέ τούτοις τήν άγάπην, ό έστιν σύνδεσμος τής τελειότητος (“And above all these put on love [i.e. like a garment], which binds everything together in perfect harmony”; Col. 3:14, apparently alluding to Christ’s seemless garment in John’s account of the Passion). The Greek word order here, incidentally, lays particular emphasis—like Dan’s forearm—on the nature of that harmony, which, Paul insists, is perfect.
Now by the time Paul was writing in it, the ancient Greek language was in a sad state of decline, thanks to those greedy war-mongering busybodies of the ancient world the Latin-speaking Romans. According to Fascicle VI in Volume VII of the elegant multi-volume Thesaurus Graecae Linguae (edited between 1848 and 1854, long before computers were even thought of, by those miracle-working German scholars Heinrich Stephan, Karl Hase, and the Dindorfs, Wilhelm and Ludwig,—I don’t feel at all comfortable leaving home without it—the Romans habitually translated τέλειος/τέλεος into Latin as Perfectus, Integer, Concinnatus, and Solidus, and τελειότης, –ητος, –η as Perfectio or Integras. Predictably they also flipped τέλειος/τέλεος gender-wise into the heartier masculine form perfectus, –ūs, and applied it to building materials (Vitruvius, 1, 2, 6). Again, this seems curiously germane as regards Dan’s arm.

However, where we see flashes of brilliant interpretative light is in the abstract Latin noun which by sleight of hand the Romans turned τελειότης, –ητος, –η into the refreshingly, delightfully feminine perfectio, –ōnis, whence by a circuitous route it burrowed its laborious way into modern English, via the Dark Ages, the Romance Languages, and, incidentally, hardworking homosexuals like myself.

The vast Thesaurus Linguae Latinae, which commenced publication in Germany in 1894 and will satisfactorily later this year (with luck) reach the end of the letter “P,” is, as dictionaries go, the Rome to Stephan, Hase, and the Dindorfs’ Greece. The comparatively recent TLL article on the Latin word perfectio, –ōnis covers four columns of dense 5-point type spreading over three enormous pages, carefully documenting two principal species of meaning (absolvendo and consummendo, but let’s not go there); four groups of sub-definition; eight narrower senses, which may be further divided into nine even more specific shades of meaning. I do not propose to go into any of these here, but my point is that it is no wonder the word came into English essentially in its unaltered Latin form, having, as it were, used the linguistic equivalent of strong-arm tactics, not to say a battering ram.

Now, although the knowledge of ancient and New Testament Greek (very different birds) both somehow managed to survive the Dark Ages in Europe, matters never fully recovered. New Testament Greek survived in the Byzantine east, but as a liturgical and literary language only, and not a commonly spoken one. In other words, the language took a massively sustained nose dive, lasting for approximately eighteen hundred years, so that by the time a modern Greek identity emerged from under the yolk of the Ottoman Empire at the beginning of the nineteenth century, the noble τέλειος/τέλεος and τελειότης, –ητος, –η had somewhat crashed and burned into the—how can I put it?—frankly crude form of τελειότητα.

“Perfection” as an abstract concept (pagan or Christian) was by then more likely to be applied to your average subsistence goatherd (buxom, certainly, but with unwanted facial and body hair issues—Greek women occasionally ran into the same problem—; your better class of donkey, or, indeed, a high-end lamb souvlaki.

Fortunately, however, we have seen since those dark days, especially through the twentieth century, a flowering of modern Greek culture, in the poetry of Constantine P. Cavafy for example, so that I am glad to say that one may now wear τελειότητα with pride, expressing as it does an ideal, an aspiration, a standard against which to measure oneself, one’s conduct and achievements that is no less admirable than when Socrates and Plato tossed it around at symposia in fourth-century Athens.

Good to know that Dan carries all of this around on his forearm.
Posted by Angus Trumble at 8:35 AM