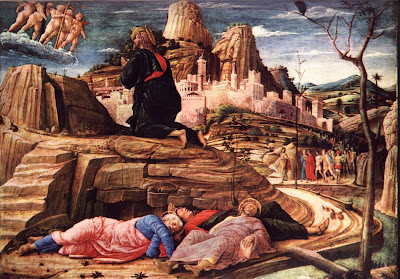 In middle age I seem to have developed the unerring capacity, whilst reading or listening, to fasten onto one or two things that are fascinating but quite obviously not germane.

On Palm Sunday, for example, the account of the Passion is read in full, a good way to begin the last week of Lent, and a useful and sobering way into Holy Week. This year we heard Mark’s version (14:32–15:47), beginning with the Agony in the Garden (above, in Andrea Mantegna’s rocky version with rabbits), and proceeding through Jesus’ arrest, trial, scourging, journey to Calvary, crucifixion, death, and burial.

Two years ago I was thoroughly perplexed by the trial of Jesus—there is, after all, nothing much about that extraordinary dialogue between the Roman prefect and the Son of Man that is not perplexing, surely one of the most remarkable pieces of reportage to survive antiquity. But last year, and again yesterday morning, I became thoroughly fixated on one strange aspect of those moving, prefatory, deeply private moments in the Garden of Gethsemane (Mark 14:32–42).

All four Gospels agree that Jesus and his disciples went to the garden (Mark and Matthew name it γεθσημανη; Luke gives the wider locality, the Mount of Olives (22:39); John refers simply to κηπος, garden). Presently Jesus is arrested there, and abandoned by the disciples, as He predicted He would be. The Gospels are unanimous in portraying Jesus in distress, but the synoptics provide some telling details upon which Mark and Matthew mostly agree, details that Luke compresses, and John omits entirely.

According to Mark and Matthew, Jesus takes Peter, James and John away from the rest of the disciples, asking the others to wait while the four pray together some distance away—Luke estimates the distance as a “stone’s throw,” which is not very helpful (22:41). Jesus then becomes “greatly distressed and troubled,” then confides to the chosen three His feelings of anguish, and asks them to watch and wait, i.e. watch in the sense of standing guard. Jesus then removes himself farther still. Alone, He falls on his face, and addresses the heart-breaking prayer: “Abba, Father, if it be possible let this cup pass from me; nevertheless not as I will, but as thou wilt” (14:36). Three times Jesus returns and finds the watchers asleep.

The four Gospels further agree upon what next transpires. Judas, the betrayer, leads a crowd from the chief priests and elders of the people. This crowd is armed with clubs and swords (Mark and Matthew) or lanterns, torches and weapons (John 18:3, brilliantly deploying the fear-laden backdrop of darkness, into which John so memorably has Judas vanishing earlier the same evening). They then arrest Jesus, there is a violent scuffle, and He is taken away.

Now, according to the synoptics, Judas “had given them [the crowd] a sign, saying ‘The one I shall kiss is the man; seize him and lead him away under guard’” (Mark 14:44). Luke mentions the kiss, but shrewdly twists the motif into a bitter rebuke from Jesus (22:47–48).

All of the sayings of Jesus in the Gospels are important, but there is almost invariably some effort not merely to record but also explicitly to account for their survival—and so render each the product of some eyewitness testimony that is not merely plausible, but authoritative. However, I cannot think of any other situation in the Gospels, nor one of such power and urgency, so close to the Passion, where the words that Jesus utters are faithfully recorded, notwithstanding the carefully articulated fact that He is unequivocally alone when He utters them, and the nearest available witnesses are in any case asleep.

Here, too, there is no opportunity in the hours remaining before the crucifixion for Jesus shortly afterwards to impart this episode to a disciple, not at least within the structure of the surviving narratives. Nor do the synoptics seem to be aware that Jesus’ solitary prayer leaves them vulnerable to challenge on the grounds of pure logic, and for lack of an eyewitness. Of course, this need not worry the modern exegete, but it bothers me.
To some extent, as the great biblical scholar Raymond E. Brown sagely notes, the structure of the Gethsemane section dramatizes Jesus’ isolation in three stages or movements, into the third of which “Let this cup pass,” uttered three times, sits nicely—the same cup, incidentally, which Jesus himself has pressed upon his disciples not long before. He takes with him the chosen three. He finds them asleep three times, and, when God is silent, Jesus proclaims that the Son of Man is to be given over to sinners, a prediction He has actually made three times before. A chorus of threes: the bread and butter of ancient mnenomic and oral transmission, with powerfully consistent and emphatic relevance to the larger purpose of the Passion narrative. In Brown’s view, the kiss of Judas in Mark is “a dramatic touch.” Indeed it is, but does its stated rationale in Mark and Matthew ring true? To me it does not.

Let us consider a radical alternative. Judas was one of the twelve. It ought to have made far better sense for Judas to remain with the disciples, and avoid raising any suspicion by absenting himself. Anyone could lead the crowd to the garden, but only Judas could discreetly insure that Jesus and his disciples were kept track of in case they attempted to hide, escape, or scatter—and scatter freely they certainly did following Jesus’ arrest. Moreover, Judas’ kiss of betrayal makes little sense as a means by which to identify Jesus—He was highly visible in Jerusalem all through the week—than as a clever means by which Judas could identify himself to the crowd. Self-preservation is generally one of the highest priorities for well-paid grasses, and thirty pieces of silver was a lot of money.

If we take these steps of imagination, and we bear in mind that the Gospels do not generally supply details without a reason, the better to persuade the reader or listener that these things were true, it follows that someone other than Jesus, someone lurking in the shadows—watching not in the sense that Jesus used the word, but rather spying—saw the three disciples sleeping; overheard Jesus’ impassioned prayer, and told someone about it afterwards. Why not Judas?

According to the curiously unsatisfactory coda that is only to be found in Matthew (27:3–10), unequivocally Judas repented;—far too late to save Jesus—then tried to return the thirty pieces of silver; was haughtily rebuffed (according to the hypocritical chief priests the money was tainted by Jesus’ blood), and, in despair, finally hanged himself. I fervently hope that before Judas took his own life, in his anguish and remorse, he confided in whomsoever was still prepared to listen, and told them what he maybe saw in the Garden of Gethsemane, and more importantly what he overheard: “Let this cup pass.” Post hoc, with the benefit of hindsight and the full and devastating knowledge of his own culpability, Judas was presumably better able than most to grasp the full significance of God’s deafening silence in the garden, and Jesus’ own deep insight into the nature of what the next day would bring.

Hardly germane, as I said before, but an intriguing thought nonetheless.
Posted by Angus Trumble at 8:38 AM