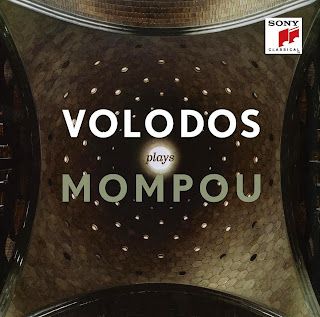 Over the past few years I have bought fewer and fewer CDs, mainly because I now have so many that it seems perverse to add to an already unwieldy collection. However, I find that my acquisitions, though far less numerous and frequent, have tended to become more careful. Such is the case with the new Sony recording entitled Volodos Plays Mompou, which has received, as far as I can tell, almost universal critical acclaim. I picked it up the other day, and since then I have been listening to the pianist Arcadi Volodos with an increasing degree of wonder, admiration, and delight. He is one of those great artists whose technical brilliance and dazzling keyboard virtuosity is matched by the deepest possible poetical insight and subtlety of thought—I wonder why these qualities have so consistently combined and re-combined in the Russian character? In this sense Volodos is just as at ease performing on the grand scale as he is in miniature. One thinks of a mighty seascape in oils, as against one of the barely even minimal effects in watercolour on a page in one of Turner’s small sketchbooks. With these performances on the piano of short pieces by the Catalan composer Federico Mompou (1893–1987), Volodos similarly demonstrates supreme command, if that is the right word, over an intimate, impressionistic dream-scape of shadows, failing light and softness, of murmured phrases of rare beauty and, indeed, of silence itself. No pyrotechnics here, but rather an almost uncanny pianism with which Volodos coaxes infinite colour from at times deceptively simple musical phrases, even single notes. As the critic of the Boston Globe remarked—and it is hard to forget this as you begin to absorb the entire program—“chords melt into what Wallace Stevens called ‘the half colors of quarter-things,’” and Volodos has chosen a sequence of pieces with such ingenuity that we are led gradually from light into penumbral places, and, finally, to darkness. It would be foolish to alight upon one short piece over and above all the rest, however I will readily admit to occasional bouts of foolishness: Volodos is, like the late Vladimir Horowitz, a great improviser, and his own transcription of Mompou’s Damunt de tu, nomes les flors (which means “Upon you only flowers”) strikes me as a work of genius twice over. It is rather like learning to listen, really listen, all over again.