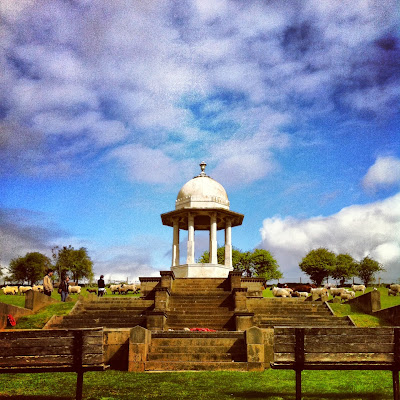 In the earliest stages of the Great War, before British casualties began to assume their calamitous scale, measures were taken to meet the needs of imperial troops, above all ordinary soldiers of the Indian army who were wounded in France. For this purpose the Royal Pavilion in Brighton was turned into a military hospital, and arrangements made there to accommodate the different dietary and other requirements of Hindu, Sikh and Muslim patients. There seems to have been some notion that the architecture of the Prince Regent’s batty Pavilion would provide more sympathetic surroundings for these Indian troops, in other words make them feel more at home than in the more humdrum surroundings of Rickmansworth or, indeed, the splendors of Cliveden and other ad hoc military hospitals set up in great country houses. One must presume that a more sinister reason was the urge to sequester and separate these men along the colour line. Thus in December 1914, 345 Indian soldiers took up residence at the Pavilion. Most of them recovered from their injuries, but several dozen soon died. The bodies of twenty-one Muslim men were buried in accordance with Islamic rites at the Shah Jahan Mosque in Woking, Surrey, but those of ten Hindus and Sikhs were taken from the Royal Pavilion to a spot on the South Downs above Brighton, overlooking the English Channel—in the middle of an exposed field belonging to the fourth Marquess of Abergavenny. A local undertaker, presumably in close consultation with old hands at the India Office who knew about this sort of thing, was prevailed upon to build a ghat or funeral pyre on which the remains were cremated, together with those of forty-three other non-Muslim Indian casualties from other military hospitals in the district. Their ashes were afterwards scattered in the English Channel; by ancient convention these must be returned to the life-giving element of water. About a year later, Sir John Otter, sometime mayor of Brighton, proposed the creation of a permanent monument over the site of the ghat. His plan was approved by Sir Austen Chamberlain at the India Office, who agreed to share the cost of building it with the Brighton Corporation, and a portion of the land was in due course ceded to the council by Lord Abergavenny. Private fund-raising proceeded throughout the war, though for obvious reasons at a gradually diminishing rate. At last, in April 1918, a design in Sicilian marble was produced by a young Indian architect, E. C. Henriques, in close consultation (until his death in 1917) with Sir Samuel Swinton Jacob, a pioneer of the synthetic “Indo-Saracenic” style of Anglo-Indian architecture. The contract was awarded to a firm in Manchester, and the Chattri was unveiled by the Prince of Wales on February 1, 1921, only a few months after the solemn interment in Westminster Abbey, “amongst the kings,” of the remains of the Unknown Warrior.

The Chattri is indeed a pungent place. Here, at the fringes of gentle, quintessentially English pastures—and a slice of primitive England, moreover, that enjoys inconceivably ancient associations—you follow a long and, at times, almost invisible bridle-path to which the only access is a little turn-off at Patcham, a few hundred yards east of the busy junction of the A23 and the A27 Brighton Bypass. Through an ordinary footpath gate, you walk a considerable distance up-hill until, passing over a succession of gentle rises, finally, far from the nearest road, you catch your first glimpse of a white marble dome hovering in a little wooded dale. Approaching nearer, the Chattri swims into full view—an elegant, slender pavilion, rising 29 feet to its finial from a plain square base set upon gently graduated terraces. Eight square columns supporting the dome shear into elegant, slightly tapering octagonals exactly halfway up; the shallow drum and its broadly flaring lip are likewise boldly octagonal. The plinth bears an inscription in English, Hindi, Punjabi and Urdu, the text of which was composed by Sir John Otter. It reads: “To the memory of all Indian soldiers who gave their lives for the King–Emperor in the Great War, this monument, erected on the site of the funeral pyre where Hindus and Sikhs who died in hospital at Brighton passed through the fire, is in grateful admiration and brotherly love dedicated.” When we approached it quite early on a brisk weekday morning in late spring, a flock of black-faced sheep was grazing peacefully in the compound, and low clouds scudded past admitting occasional flashes of sunshine. It was as if, once within earshot of shells exploding in northern France, the imperial story—the story of the Raj—had been partly repatriated, and prematurely laid to rest in the pastoral bosom of Sussex.
Posted by Angus Trumble at 1:23 PM