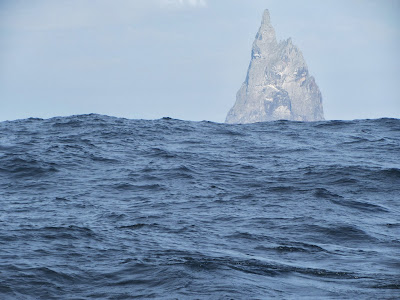 The soothing atmosphere of Lord Howe Island could not contrast more sharply than with the amazing sight of Ball’s Pyramid, a vertiginous shard of rock that rises 1,844 feet out of the Tasman Sea, approximately twelve miles southeast of Lord Howe Island. I took an alarmingly small motor boat to inspect this strange place, and found it to be worthy of the wildest imaginings of a Burke, a Beethoven, or a Byron—the perfect fodder for the Romantic imagination: wild, impossible, unthinkable, and home only to vast colonies of shearwaters and a particular type of stick-insect once thought to be extinct. The ocean swell was considerable, and a school of porpoises joined us for the last leg, not so much leaping playfully, as tumbling helplessly among the whitecaps. It was far too rough for me to photograph them. 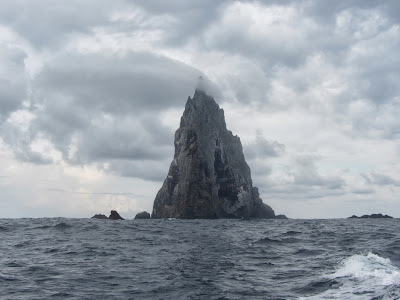 As if conforming to my increasingly lurid imaginings, as we approached this outcrop a weird veil of cloud materialized around its summit, as if to proffer incontrovertible proof of its own dizzying height. This put me in mind of J. M. W. Turner, with grace notes of Franz von Stuck. Ball’s Pyramid and the rocks surrounding it are the remnants of an extinct volcano which few people have ever dared or even bothered to scale, although I gather this was once achieved in the 1960s by a party of brave students from the University of Sydney. 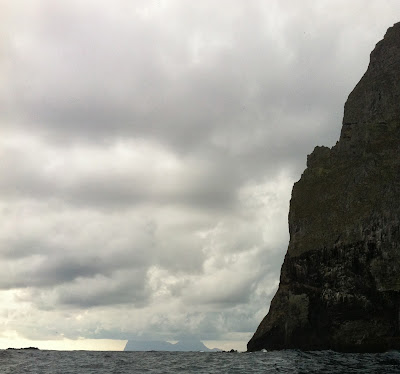 Perhaps the most thrilling thing, upon sailing around the southernmost part of the monolith and coming back around the other side, was this sight of Lord Howe Island to the north, reduced by distance to an almost meaningless spec, a small bump in an increasingly dark and tempestuous sea. There are, after all, in these days of anodyne airlines, relatively few opportunities to experience the Conradian dimension of travel. Fortunately I do not get seasick.
Posted by Angus Trumble at 2:29 PM