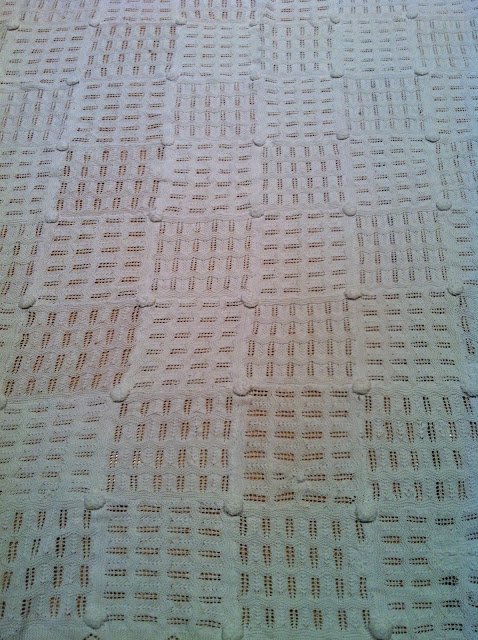 Among the various heirlooms that our late mother left behind is this enormous bedspread. It has taken me this long to find the time, and, importantly, a sufficient amount of space in which to unfold and inspect it closely, and I am now kicking myself for not having done so sooner. It is a wholly remarkable survival of colonial Australia. 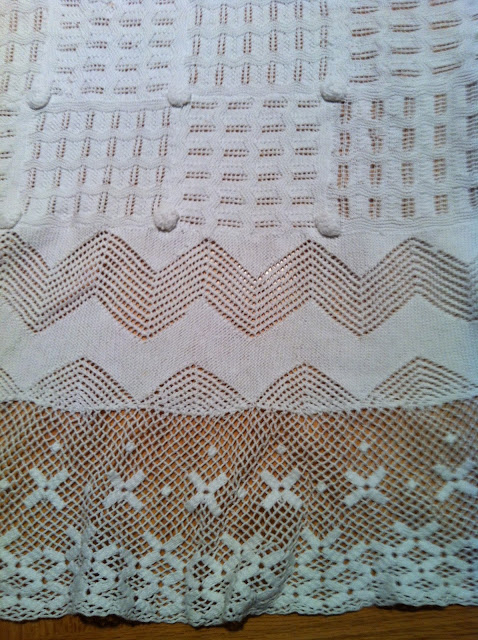 We know that it was knitted from fine white cotton threads by our great-great-grandmother, (Eliza) Laura Travers, during the long and arduous voyage from Liverpool to Hobson’s Bay between February and July 1858, aboard the four-year-old, 1,042-ton Florine. Laura was nineteen. She sailed as a cabin passenger in the company of her elder sister Henrietta, and the family of Peck: Dr. and Mrs. Ffloyd Minter Peck, of Newmarket in Suffolk, to be exact, their three daughters under ten and two sons under four, and a servant. Henrietta and Laura lived with the Pecks in Sale until they each got married, Laura to our great-great-grandfather William Pearson of Kilmany Park at Grassdale, near Sale, on August 4, 1859, and Henrietta to his crony Lemuel Bolden of Strathfieldsaye on the northwest shore of Lake Wellington not long afterwards. These marriages had been prudently arranged in London ahead of time. The other cabin passengers were Mr. and Mrs. Johnstone, their two young children and a servant; Mrs. Dufrayer and her teenage son and daughter; Mrs. Feinagle; Miss Mist; Mr. (the future Judge) and Mrs. Johnson and child, and Messrs. Phillips, Williams (W.), Williams (C.), Anderson, Clive, Atkinson, and Skene; 102 steerage passengers, and 21 crew.

The immense task that Laura Travers set for herself on that long voyage into the grip of an unforgiving southern winter was to create a bedspread consisting of 380 patterned oblongs (arranged 20 by 19), sewn together, the corners concealed beneath handmade knitted buttons, the whole surrounded by a ten-inch-wide continuous border. The finished object measures twelve by ten feet.

If nothing especially untoward had occurred on the voyage one might nevertheless imagine the pall of seasickness, the almost perpetual damp, at least eleven screaming babies aged one or less, the poor light, the effects of constant motion, the foul smells, the tedium, the Sunday prayers, the increasingly noxious food, the creepiness of certain fellow passengers and male crew, and the constant requirements of the Peck children—lasting for 19 endless weeks and three days. These and any number of other trying conditions obviously lift the work of Laura’s hands from a substantial achievement on its own to the level of a minor miracle. However, we know that the voyage turned into a nightmare that was infinitely worse. 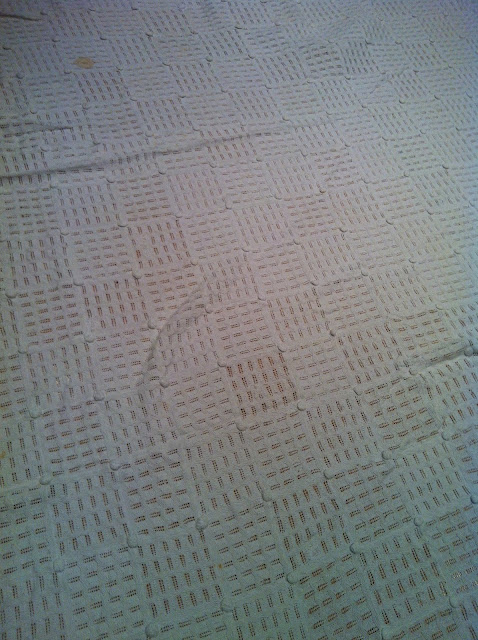 According to the Argus (Monday, July 5, 1858, page 4), the Florine “left Liverpool, on the 23rd. February, and proceeded prosperously on her voyage until the 5th. April, when in lat. 33.20 south, long. 20.25 west [right in the middle of the South Atlantic, almost exactly half way along an imaginary line that stretches between Montevideo and Cape Town], she was dismasted, and obliged to put into Table Bay, which she reached on the 24th. of the same month, and was detained refitting until the 22nd. of May.” The Florine was lucky to survive the loss of her mast—imagine the sickening sound of a mighty tree trunk snapping in two above the roar of a gale, the crash of rigging, the screams, the sheer terror of it—yet the vessel (which, judging from her position when this occurred, must have been maintaining a course due south toward the prevailing westerly winds of the Southern Ocean, the so-called fast route which ought to have carried her very quickly along an arc dipping far south of the Indian Ocean) took only nineteen days, presumably under jury rig, to reach Table Bay—an extraordinary feat of seamanship on the part of Captain W. A. Curry.

Still there was more. A few weeks after setting sail from the Cape, “a fatal accident occurred; a steerage passenger, named John Noer, a native of Germany, was knocked overboard by the jib-sheet, and although the vessel was rounded-to, boats lowered, and life-buoys thrown overboard, he was drowned.” If Laura had dropped a few stitches in the midst of all this, who could possibly blame her? Yet there is not the merest suggestion of a wobble, a conspicuous tightening of the threads in moments of crisis, or a quite understandably tremulous knitting needle anywhere in this vast ocean of minuscule stitches. She was evidently a remarkable young woman.

The end of the journey must have been especially maddening, and not without further dangers. The Florine dropped anchor at the Heads in the middle of the night on Tuesday or Wednesday, June 29 or 30, but either because of bad weather, or overworked pilots, or too much shipping ahead of her in Port Phillip Bay, she had to wait there for some days. Finally she reached the outside anchorage of Hobson’s Bay at about 10 o’clock on the following Saturday evening, July 3, in the tow of the steam-tug Lioness (appropriately enough). This presumably meant sitting out yet another Sunday of frenzied knitting before disembarking by tender on Monday, July 5. Did William have time to drop everything and come up to Melbourne from Sale to meet Laura and Henrietta Travers? Probably not. He may already have received word from Cape Town of the Florine’s long delay, and though her arrival at the Heads was reported in the Argus on Thursday morning, July 1, according to The Gippsland Times (Thursday, August 20, 1936, page 6) “[t]he only way into [and out of] Gippsland then was by boat from Port Phillip to Port Albert; thence by coach or other conveyance to Sale, or by way of the old Lakes Entrance, with the risk of not being able to cross the bar, or being stuck to it.” Dr. Peck and his little party still had that ordeal ahead of them: a relatively dangerous, even more uncomfortable though mercifully brief voyage from Melbourne to Port Albert aboard a far smaller vessel such as the 80-ton Storm Bird, which set sail on July 20—and a bone-jarring eighteen-hour ride over terrible dirt roads, and, at last, upon arrival, the meager hospitalities of a deeply questionable over-crowded inn at Sale.

Until now I was slightly apprehensive lest the bedspread, when finally unfolded, might turn out to be in shreds—busily munched on for more than 150 intervening years by the insects of East Gippsland, yielding a Miss-Haversham-like aggregation of wispy remnants, and rot. But, no: It is in quite remarkably good condition. There are one or two small stains, and a few small mends here and there—I think probably the thoughtful work of Aunt Anne, certainly comparatively recent (in other words carried out rather well about 40 to 50 years ago, I should say)—but since Laura’s death in Melbourne in 1896, aged 59, I think you could probably count on the fingers of one hand the number of occasions when this superb object has ever been opened, and examined closely. 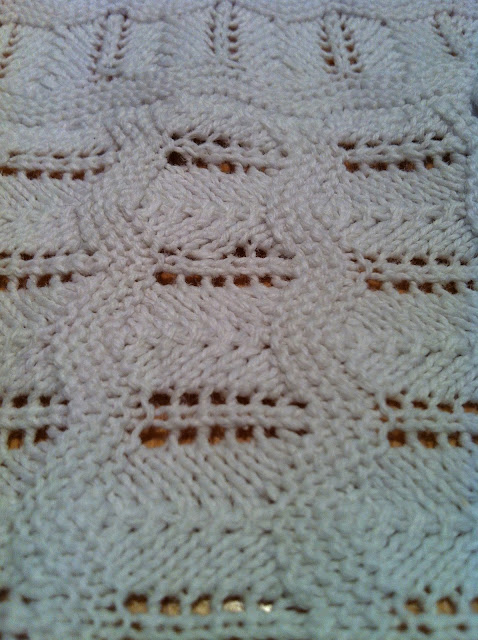 By 1872 the Florine was carrying shipments of guano from Peru, around Cape Horn, up the Southern Atlantic via Réunion to Liverpool. On February 15 she set sail from Callao but never reached Réunion, and was duly reported missing. No trace of her was ever found, and the lives of her fourteen passengers and twenty crew were presumed lost.
Posted by Angus Trumble at 10:29 AM