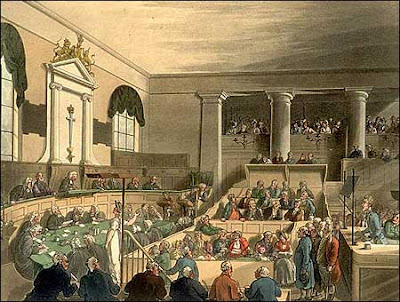 Social historians now have a powerful resource at their disposal in the keyword-searchable online Proceedings of the Old Bailey, 1674–1913. This long sequence of mostly brief, often messy trials constitutes a grim vista of late seventeeth- and eighteenth-century crimes, malfeasance, assault, murder, and any number of usually terrible events in the lives of ordinary people. Yet from time to time these transcripts of evidence baffle as much as they elucidate.

Lately I have been trying to find out exactly when both the English term florist and its French source and equivalent, fleuriste, made the almost identical transition in meaning towards the end of the eighteenth century from the old senses of “one who cultivates flowers,” or one skilled in knowledge of flowering plants, and also very occasionally an artist proficient in drawing and painting flowers, to “one who deals in flowers,” in other words to the modern sense of florist as a wholesaler or retailer of cut flowers. Neither the Oxford English Dictionary nor the Trésor de la langue française shed any light on this question, other than effectively raising it in the first place by covering both sets of meanings, of which the latter sense is certainly current. The old meaning of “one who cultivates flowers” was certainly the only meaning known to Dr. Samuel Johnson in 1755, so at length I turned to the Old Bailey.

Hundreds of cases involve men and women described as “florist,” often victims of crime, witnesses, and occasionally the accused, however it is never clear either from context or circumstance what that designation actually meant, so I we are generally none the wiser. Nevertheless, after some preliminary browsing, I found my way to the trial of one Richard Watts, aged 17, who in May 1809 was indicted, tried, convicted, and sentenced to death by Mr. Baron Graham for stealing a sheep.

The trial of Richard Watts was fairly straightforward, and may be summarized as follows: First, William Matthews, the owner of the stolen sheep, gave evidence according to which he correctly identified the skin because it carried his mark, “W. M.,” in ochre and oil. The question arose whether he could be sure that that mark was actually his, and not a very similar mark belonging to a Mr. William Milne who grazed his sheep in the same locality. Matthews was adamant: the mark was his (because the “W” he used was simply the “M” brand turned upside down, for economy), so the offending skin was definitely removed from his stolen lamb, and somewhat crudely at that. Second, one Thomas Kirby gave evidence that the defendant had sought from him the name of someone who would be willing buy some skins. Mr. Kirby testified that he had duly put the defendant in touch with John Goodall. Third, John Goodall, “breeches maker, fellmonger, and dealer in skins and wool,” gave lengthy evidence in relation to his apparently innocent purchase of the skins from the defendant. Subsequent witnesses attested to the means by which the skins were correctly identified in Hatton Garden by various owners, including Mr. Matthews, and how the defendant was then apprehended by a police officer. At the end, counsel for the defense called two character witnesses. In view of his age Watts had his death sentence commuted, presumably to transportation.

Now the strange, indeed mystifying, part of the transcript occurs in the testimony of John Goodall, “breeches maker, fellmonger, and dealer in skins and wool,” in a passage where the prosecutor was obviously trying to demonstrate that Mr. Goodall would never have purchased the skins had he known they were stolen, and/or how accurately he could later identify any such skins:

Q. Have you not gone by the name of Johnson? A: I have been called Johnson; I was victorious in the florist line; by some people I was called a Johnson; I was the first florist in the known land.

Q. You gave eight shillings for these skins? A: Yes.

Having taken this bizarre detour, and having just as suddenly returned to the issue of Mr. Goodall’s purchase of the stolen skins, the cross-examination continued down that same path, and made no further reference to Johnsons or florists. Weird, yes?

According to OED “Johnson” or “Jim Johnson” is low slang for penis, but of comparatively recent, North American origin—the earliest instance they cite is from an account of traveling across Canada in 1863, so I very much doubt if that is the sense with which Mr. Goodall the fellmonger describes himself here. There is also the odd contrast between the mixed uses here of Johnson as a common surname, and as a different sort of term accompanied most conspicuously by the indefinite article. What on earth did Mr. Goodall mean, and what was Mr. Bolland’s purpose in asking this apparently irrelevant question? It would seem distinctly odd for the credibility of a witness for the prosecution to be called into question by the crown itself, unless there were some suspicion of complicity in the theft, or maybe a previous conviction under the alias of Johnston. As far as I can see none was recorded against any such florist or fellmonger, but one would hardly explore the first question on the stand, nor indeed set out to discredit one’s own witness by raising the second.

One possibility is, of course, that the indefinite article was a misprint, and this would at least eliminate one source of mystification, though not the other. I rather doubt if Mr. Goodall was here laying claim to having been the earliest retailer in England of cut flowers; but it seems almost as dotty for a dealer in skins and fleeces to assert that he was not merely “victorious in the florist line,” presumably as a cultivator, but also best (in that sense of “first”) in the known land—but there it is, in black and white, scribbled down by the court reporter to tantalize us future inquirers after utterly lost meanings.

There is another intriguing possibility, suggested to me just now by my generous senior colleague Professor Keith Wrightson. Let us assume that the indefinite article was not a misprint. Was there in the third quarter of the eighteenth century some Mr. Johnson who was well-known as a seedsman, nurseryman, or florist—perhaps head gardener to the Duke of Devonshire, say, or else admired for his work on species hybrids at Kew? If this were the case, perhaps being “a Johnson” was a mark of distinction in horticultural circles, the seedling set, which could give rise to some formulation such as “My lords may well observe that the excellent Mr. Goodall is nothing less than a Johnson by his cultivation of ariculas, carnations, and truly choice ranunculus.” (The phrasing from cultivation onwards is taken directly from a seedsman’s advertisement placed in The Times newspaper in 1798.) However intriguing or plausible this hypothesis might be, it nevertheless fails to explain how a man who ever attained the distinction of being a Johnson in that sense returned to the rather less distinguished occupation of fellmonger with which he evidently began his life, or why the question cropped up at that point in the trial of Richard Watts. We may never know, but I shall keep my ear to the ground.
Posted by Angus Trumble at 12:07 PM