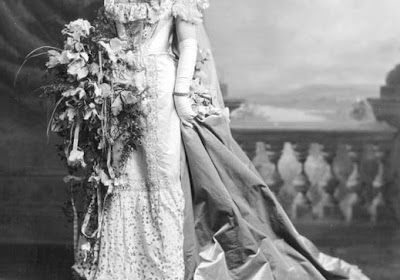 When at length, after the end of the Great War, evening Courts resumed at Buckingham Palace a number of reforms were wisely instituted through the Lord Chamberlain’s department, of which perhaps the most significant was the decision to make the enormous floral bouquets of earlier reigns optional. As reported in The Times on Friday, May 19, 1922 (“Bouquets for the Court: Flower Fashions of To-Day,” page 7):

The Court florists are keenly interested in the result of the “bouquets optional” decision which is written in pencil on the four sketches which are being shown at the Ceremonial Office. The florists have not been doing well for a long time owing to the high price of flowers and the general reluctance to spend money on the most forgivable and most perishable of all luxuries. And there is a fear that “bouquets optional” may result in a “fan” Court. However, the occasions in a woman’s life when she can carry a bouquet are so few that it is probable that the florists’ fears are groundless and that many women will avail themselves of the opportunity. The modern [post-War] bouquet, which is an adaptation of the Early Victorian bouquet, is far more lasting than the shower bouquet of past Courts, which flagged during the long wait before its owner made her bow to her Sovereign. Shower bouquets are still carried by the bride’s mother and the bridegroom’s mother at weddings, but brides generally carry sheaves and their maids Victorian bouquets. The latter are so tightly packed that even if one flower droops it is not noticeable among many, and the wire handle makes it easier to manipulate. The making of a Victorian bouquet is a work of art, for to secure the even circle of colour many of the flowers have to be picked to pieces and put together again. Among the little flowers suitable for these bouquets which will be in bloom at the time of the first Court are iris, mignonette, carnations, wallflowers, forget-me-nots, pansies, love-in-a-mist, stocks, moss roses, and white and mauve lilac. The little flowers are often the sweetest, and the perfume of a Victorian bouquet is a simpler thing, even with its many scents, than that of the exotic hothouse shower variety.

Fashion being so often a matter swinging pendulums, of sharp reaction from one decade to the next, there is much here that sheds light on the conventions of Edwardian Court protocol with which I have been so preoccupied lately, specifically that exotic hothouse shower bouquet which throughout the first decade of the twentieth century ladies were positively obliged to carry when being presented at Court. Towards the beginning of the reign of King Edward VII, according to an article by Mary Howarth in the Pall Mall Magazine, “the florists were fluttered by an announcement that arose in aristocratic circles that bouquets were no more to be allowed, because they took up too much room [my italics].” This proposed reform was evidently abandoned under strong pressure from the Court florists, who, if advertisements published on the front page of The Times are an accurate indication, outnumbered Court dressmakers and Court hairdressers (whose principal function was to install and secure tiaras, veils, and white ostrich-feather headdresses) by a factor of three. Such businesses came and went. In 1890, for example, the partnership of “Wellesley and Smith, formerly under the style of Madame Josephine, of Lower Grosvenor Place, S.W., Court florists” dissolved amid much acrimony—but in the Edwardian decade the main players, led by Edward Goodyear of The Royal Arcade, Albemarle Street, and Old Bond Street (who held a royal warrant), were: G. Adam and Company at 42 New Bond Street; John Barker and Company of Kensington High Street; Carlton–White at 53 New Bond Street; Messrs. Felton and Sons of Hanover Square; The London Flower Company (proprietor Howard Howes) at 22A North Audley Street; R. Silvester of 105 Gloucester Road, Queen’s Gate; G. Strudwick of 20 and 21 Bayswater Terrace, Kensington Gardens; Mr. Titt of Windsor, and L. O. Walter, 31 Bryanston Street.

These firms supplied ladies with often floor-length bouquets comprising sprays of pungent gardenias, roses (damask, tea, briar), clove-scented malmaison carnations, nodding white eucharis, Belgian camellias, Japanese lilies, calla lilies, prong-like mignonettes, orange-blossom, jasmine, African tuberoses, giant narcissi, clematis, mimosa, Roman hyacinths, Dutch tulips, Chinese fuchsias, and above all rare orchids—the longest possible sprays of the largest, spottiest, stripiest, frilliest, and most carnivorous-looking blooms. Arrangements of these could assume the dimensions, weight, and cumbersome clamminess of a mutant cabbage, from which also dangled a Portuguese man o’ war root system consisting of tendrils, vines, maidenhair fern, myrtle, ivy, wormwood, lady’s laces, and fragrant eucalyptus. Even as one entered one’s state coach, it was almost as if these were still trailing out the front door. Tied with a broad watered-silk ribbon, the raw materials for these crazy Edwardian floral effusions ultimately came from the twice-weekly wholesale auction sales in Covent Garden, and, once assembled by the Court florists, could easily cost more than twenty guineas, a third more than the Dowager Empress Marie Feodorovna of Russia paid in St. Petersburg for that fan. The journey to Buckingham Palace therefore involved carrying a bulky three-and-a-half to four yard train over one gloved arm; preventing it from getting crushed; holding the enormous bouquet in one hand, being careful not to squash the delicate fronds, and, in the other, a folded fan and a reticule or small purse and an entrée card, all the while balancing a diamond tiara and clutch of two or three bouncy ostrich feathers on your head. These were vulnerable to an unfortunate yank on the regulation white veil that descended from them. Once you reached the Palace, there ensued a crush in the vestibule. An army of ladies’ maids took wraps and cloaks in exchange for a numbered ticket (which had to be received and put away). You then proceeded up staircases and through packed corridors under hot new electric lights. Yet by convention ladies approaching the King and Queen were not permitted to open their fan, and nor could they let go of their train or their bouquet or their card:

Now the moment of all moments arrives: the presence of Royalty is entered. Each lady has her card in her hand (and each gentleman has his); she delivers it to the functionary nearest the barrier after it has been passed; and at the moment she is inside the [Ball-]room is conscious that her train is being gently taken from her arm, where she has up to that moment jealously and lovingly borne it, by one of the Gentlemen-at-arms, and cleverly spread by two of them upon the floor. As she glides onwards her card is passed from hand to hand until it is taken by the Lord Chamberlain himself. Lord Clarendon stands at the King’s left hand. Deliberately he reads the card, deliberately scans the donor of it over his spectacles, as if to satisfy himself that all is absolutely to his judgment, ripe and right for the important procedure of announcement, and then in a clear voice he speaks the name, or, should the case be that of a debutante, announces her chaperon’s first, adding that of the lady she is presenting. When her name is uttered the lady is face to face with her King; she curtseys very, very low to him. The King bows, bestowing upon her that most gracious smile which seems to convey to her a direct message of hospitable welcome. Then a few steps further she moves: she is face to face with her Queen. Again she curtseys very, very low. Her Majesty inclines her head and sweetly smiles. Onward she goes, her obeisances all made. At the portal on the other side, as if by magic, her train is returned to her arm and she passes out…

...by which Miss Howarth surely meant “leaves the room,” and not “loses consciousness”—although it is inconceivable that these rituals did not from time to time claim at least a few victims of fainting, or even heart attack. Meanwhile, bearing in mind all the encumbrances, how was one supposed to tackle the supper room afterwards, viz. “the most delicately delightful ‘little’ dishes, and superlatively charming cakes and creams...[which forms of refreshment were] taken standing”? How, indeed, did one contrive simply to keep one’s balance when either the floors were polished up to the smooth slipperiness of plate glass, or else the deep pile of silk carpets tugged powerfully at one’s various layers of hem?