Recreations in Who's Who 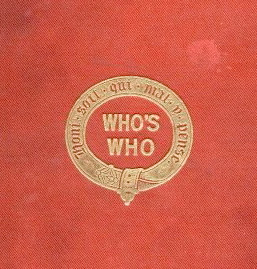 These days most people either do not have enough imagination or spare time or superabundant creativity to list recreations in their entries for Who’s Who that stray far beyond walking, reading, tennis, or golf—if they bother to list them at all. Others indulge that irritating habit of using their entries as an opportunity to insert a tedious little joke. Naturally in both respects, as in all others, the Edwardians tease and delight us by going much further in the same directions. In his “The Recreations of Distinguished people” (Temple Bar, 127:507, February 1903, pp. 208–16), Charles I. Graham selected from the 1902 edition what he then regarded as some of “the most interesting pieces of information afforded by this most interesting book”:

Dr. T. L. Cuyler, for instance, states that “fifty-two years of active life in such perfect health have been his as to need no recreations”; yet, he adds, “except walking, and entertainment-reading, and talk”—a liberal exception after all. Mr. Nicholas D. Davis, auditor-general of British Guiana, tells us that “he knocks off work to carry bricks”…and that his peculiar form of recreation also consists in “historical researches relating to English colonization in America.” This is something like the answer given by William Montgomery Crook, editor of the Echo, who looks on “politics” as part of his recreation. It is indeed difficult to conceive how men’s recreations can, in any true sense, lie so close to their daily work. Of course, if a man has changed his calling as life goes on we can understand how his recreation may consist in resuming somewhat of his earlier tasks, as when Dr. J. B. Crozier, now philosopher and historian, tells us that his recreations are “skating, boxing, dog-fancying, swimming, walking, and attending the practice of the special hospitals.”…
It is not always the really greatest who indulge in peculiar forms of recreation. Neither [Field Marshal] Lord Roberts [of Kandahar] nor [Lieutenant-General] Lord Kitchener [of Khartoum] is eccentric when at play. Lord Roberts simply states that he hunts and bicycles; Lord Kitchener apparently ignores the question. It does not need a reference to Who’s Who to inform us that the present prime minister’s recreation is golf [the Right Hon. Arthur Balfour, M.P.], nor that of the late prime minister (Lord Salisbury) natural science…
But to come to some of the more extraordinary answers given to this question, What is your recreation? Surely a man must have no recreation proper who tells us, as Lieutenant-General J. W. Laurie, D.C.L. and M.P., does, that he finds it thus: “Member of Governing Body of City and Guilds Institutes; agriculture, breeder of thorough-bred stock, and personal supervision of an experimental farm; also of children settled in Canada from Mrs. Birt’s Home at Liverpool.” Side by side with which we may place, “maker and patentee of the Sleepy Hollow chair,” which the Dean of Ely (Dr. Stubbs) mentions as his form of recreation.

Graham continues at length in this vein, but I must say that my favorites are the following, quoted in no particular order:

The Reverend E. J. Hardy, chaplain to H.M. Forces, “Riding his horse ‘Baby,’ or her assistant, Curate, as he calls his bicycle; talking to soldiers; taking a sunbath; thinking of the queer things of life; swimming, golf.”

H.S.H. The Duke of Teck, brother of the Princess of Wales, the future Queen Mary: “A little of all.”

Mrs. Crawford, Paris correspondent of the Daily News: “Moon- and star-gazing when resting on oars in the country; was in youth devoted to reading, chess-playing, and pictorial art; likes now a quiet rubber of whist; hardly ever knows what tedium is; is a constantly interested observer of animated nature; has found real life so interesting that novels and plays seem flat; roughed it in the [Franco-Prussian] war of 1870, and during the Commune, and feels thankful for the education thus acquired.”

The Countess of Galloway: “The musical drama of Bayreuth at Bayreuth.”

The Most Reverend Richard Whately, Church of Ireland Archbishop of Dublin: “The boomerang.”

Madame Janotha, court pianiste to H.I.M. the German Emperor: “Visiting the chapel of our Blessed Lady at Czestochowa [her place of birth in Poland]. Playing the organ, reading great works, mountaineering, taking care care of White Heather (the black cat).”

George Chetwynd Griffith: “Loafing and traveling; has been five times and a half round the world; once across the Rockies, thrice over the Andes (treasures a pipe smoked at 19,300 feet above sea-level), three times round the Horn, once in the Antarctic ice; has also flown in a balloon from London to the field of Agincourt; at present wandering through Australasia and Oceania to see how they look twenty years after.”

The Reverend Canon William Benham: “Riding on the knife-boards of omnibuses.”

Colonel William Carey, C.B.: “Reconnoitering country with a view to military maneuvers in peace and war; study of scripture as literally carried out in the present day in its political aspects; deep sea diving.”
Posted by Angus Trumble at 1:20 PM