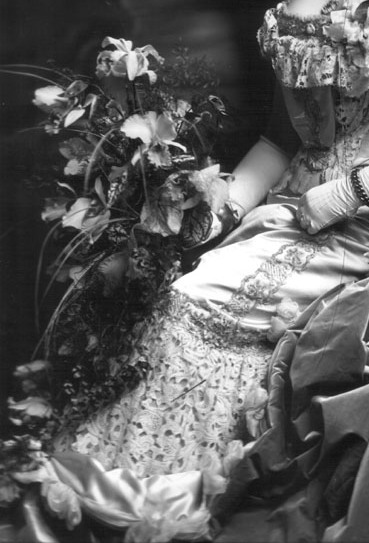 I may have over-emphasized the cumbersome character of the exotic “shower and châtelaine” floral bouquets that were hauled through Buckingham Palace by ladies being presented at Court during the reign of King Edward VII. In her regular column, “Fashion Notes,” for Bow Bells: A Magazine of General Literature and Art for Family Reading (Vol. 21, No. 268, February 17, 1893, page 177), the chatty but authoritative columnist known as “Iris” reported an exciting recent development:

The season is already anticipated, and we are contemplating the dress of the [afternoon] Drawing-rooms [at Buckingham Palace]; for these there will be a new and pretty arrangement of flowers, now such very important portions of Court costume. Hitherto it has been found by the inventor of the posy, shower, and châtelaine bouquets that the poke forward given by the handle somewhat marred the effect. A new and clever invention has therefore been patented under the title of the “Victoria Shower,” in which there is no apparent handle to a light, graceful, feathery mass of bloom and foliage. Not so great a mass either, since the new shower is smaller than the old one. The flowers are so settled that the hand is inserted right into the centre of the sprays, which fall over and round it. It is very light, the balance is quite equal, the flowers can be held quite close to the wearer’s figure, avoiding all appearance of bulkiness, and the shower can be laid down anywhere without injury to the flowers. These are (writes an expert) all estimable things in a floral appendage to court dress, and go very far to recommend the new invention, which is so simple in construction that it seems wonderful it should not have been thought of before.

It is difficult to judge whether Edwardian Court bouquets, which seem to have refreshed, indeed exaggerated, the late-Victorian twin concepts of bulk and poke, relied upon the ingenious undercarriage afforded by this Victoria Shower device, whatever it was. However, if these creations were marginally less cumbersome than they look, they were every bit as expensive. In a long article (part of an intriguing series) entitled “Flowers of the Market” in The Leisure Hour (March 1894), W. J. Gordon noted that the “London flower-bill apparently averages £1,000 a day, and all the area of the London parks twice over could not provide enough for the annual supply.” Interviewed by The London Journal four years later (Vol. 29, No. 756, June 11, 1898, page 526), “a fashionable florist” estimated that £5,000 was daily spent on cut flowers in London. The wholesale flower markets were, of course, in Cheapside and Covent Garden, but this was more than simply a point of distribution for local and imported blooms. Not unlike the ostrich feather industry, it was essentially a valuable international commodity exchange:

In Japan there are bulb farms on much the same lines as the Dutch ones [for tulips], but the crop is mostly lilies. The bulbs are shipped, packed in cases averaging a thousand each, and come to London by every P. & O. steamer. One firm alone—that of Protheroe & Morris, in Cheapside—sell 300 tons of Lilium auratum [Japanese mountain lilies] in a year, to say nothing of the less popular lilies like album [Martagon], rubrum [red Japanese], Krameri [bamboo], etc. At the moment of writing a sale is taking place in which 427 cases from Japan, containing over 40,000 bulbs of sixteen species of Lilium, in addition to 40,000 African tuberoses and other plants, are to be disposed of during the afternoon. Although these lily bulbs come to London, it does not follow that they stay here. At every sale, lots are bought for all parts of the country, and for Germany, France, Belgium, and America…Another foreign bulb running into hundreds of thousands is the tuberose. In one shipment alone, at one of these sales, 270,000 were sold. These came from New York; but South Africa sends to Cheapside 800,000 tuberoses a year. Another bulb that crosses the Atlantic eastwards is Lilium Harrisi, from the Bermudas, as many as 200,000 passing through the sale-room, shipped direct, in addition to what find their way here through the American ports. Orchids are somewhat of a luxury, but we can hardly leave Cheapside without mentioning the Friday sales, through which last year passed over 200,000 established orchids, to say nothing of the miscellaneous and, therefore, speculative. But all orchid-buying is more or less a speculation. A man bought an orchid here for nine shillings, thinking it was a well-known variety; it flowered and proved a rarity, and he brought it back to sell it again under the hammer for forty-five guineas. Others have bought orchids for a shilling, and doubted if they were worth it; some have paid at these sales £300 and more for a single plant, but this would hardly be a flower of the market. The ordinary orchids come in bundles, mostly from Brazil and Madagascar…

Perhaps the liveliest and most telling portion of Mr. Gordon’s account of the London wholesale flower trade is his description of an auction sale at Covent Garden. It is a fascinating exercise in historical reconstruction to imagine the agents, representatives, or junior staff of Carlton–White, Madame Josephine, or Messrs. Felton—perhaps even young Mr. Felton himself—navigating that raucous coal-face side of their business, and afterwards returning to crowded workrooms secreted far above or behind their hushed premises in North Audley Street or Hanover Square or the Royal Arcade, and converting such raw material into four dozen ladies’ shower and châtelaine bouquets at 20 guineas apiece, with a profit margin of more than 2,000%:

In Covent Garden an auction sale of foreign flowers is an uproarious affair, a deafening tumult of half a dozen crowds, punctuated with bangs of the hammer that make the old Floral Hall ring again. The “furniture” for each crowd consists of a rostrum in which sit the auctioneer and a couple of clerks, a platform in front where stand up two porters, and three sides of a square made up of portable staging three or four tiers high, crowded with noisy dealers and bystanders overlooking the equally noisy group in the middle. Basket after basket, box after box, is handed in from the back. One man near the platform cuts the string or wrenches up the lid; the porter to the left opens the package and hands up the delivery note over his shoulder to the clerk, who passes it to the auctioneer; and while the auctioneer glances at it, the other porter grasps a bundle of flowers rfom the package, gives them a shake, and holds them up as a sample. Now and then above the tumult you can hear snatches of what the auctioneer is saying: “Fresh from the shores of the blue Mediterranean—;” roar; “Ah! here is something fine—;” roar; “Beautiful—;” a sound as of a train in a tunnel; bang; bang; “All the same—;” roar; bang. Basket after basket, faster and faster, the bangs going four a minute, five a minute, ten a minute, the crowd yelling louder and louder, and waving their hands and frantically gesticulating. Go there at eleven o’clock on a Wednesday and see it; and wonder how a few hundred men in four or five furious groups can make such a hideous hullabaloo.

There is probably not much difference between the methods and manners of the wholesale flower trade versus the hush and polish of highest-end florists in New York and London today, but what is surely different is the degree to which Court florists of Edwardian London slaked an insatiable thirst for the rarest blooms such that their uppermost end was infinitely higher than ours.
Posted by Angus Trumble at 9:02 AM