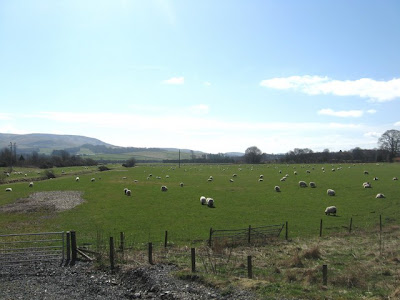 Aunt Jean preserved an issue of the Eskdale and Liddesdale Advertiser printed on Boxing Day 1888 (a Wednesday), in which the following long and affectionate obituary entitled “The Late Mr. Thomas Chalmers Borthwick” appeared on page three. This is our great-great-great-grandfather, and internal evidence—because I have in my possession the handwritten draft (a draft, that is, and not a copy made post hoc, because: “the following extract from a letter sent the writer of this...confirms...‘In this district there were Covenanters who bore your name’”)—shows that the author was none other than Thomas Chalmers Borthwick’s own son, our great-great-grandfather Alexander Hay Borthwick. It contains numerous intriguing flecks of detail, but as a sketch of character it is, I suppose, supremely partisan. The second half, which is more antiquarian in flavour than the first, does nevertheless hint towards certain aspects of the DNA, not merely the “schowting,” the sternness and firmness in the face of “pronounced vice,” but also the genial hospitality, and, above all, the curious circumstances in which, when they died, the exceedingly old bachelors John Scott and Walter Borthwick bequeathed to each other’s heirs the lease of their respective properties, which is how Hopsrig ultimately passed into the hands of Thomas Chalmers Borthwick, though not to his son. That the place was lost no more than a year before old Thomas’s death in 1888 clearly rankled.

“On the 16th inst. At Milholm, there passed peacefully away from our midst a scion of a distinguished family in Eskdale in the person of Thomas Chalmers Borthwick, late of Hopsrig. Although little known by the younger generation, Mr. Borthwick occupied a very prominent position in the district until some years ago, when his failing health compelled him to relinquish all public and private business; consequently he was seldom seen, except by his more immediate friends, or when taking a quiet walk in the vicinity of his residence. Born at Sorbie in the parish of Ewes [Dumfries and Galloway] in 1813, where his father then resided, and who at one time farmed in addition to Sorbie, Meikledale, Mosspeeble, and Lodgegill, a few years subsequently acquiring Hopsrig, where he went to reside (or, as it was then called, Bombey Bush), and eventually the extensive farm of Langshawburn [above] and Aberlosk, which Mr. Borthwick succeeded to and occupied up to within a few years of his death. While yet of tender years the management of these fine pastoral farms came into his hands, and latterly Glendinning was taken for a long lease, and then began the tug of war between him and the late Mr. Brydon of Moodlaw (whom he has not survived) for supremacy in the breed of Cheviot sheep. Keenly contesting the honours in our national and local showyards with invariable success, they, along with the late Mr. Elliot of Hindhope, quite farmed the prizes; no other exhibitor in those days having the slightest chance when the stock of those famous breeders were on the field, the fruits of reward being pretty fairly divided amongst them. For many years Mr. Borthwick had the entire management and control of the extensive estates belonging to Sir Frederick Johnstone of Westerhall in Eskdale and Annandale, and throughout the long minority of the present [8th] Baronet [1841–1913, conservative M.P. for Weymouth and Melcome Regis], who was unborn on that April morn when his father, the late Sir Frederic, accompanied by Mr. Borthwick, undertook his fatal journey homewards on horseback to Westerhall from Falford Kennels, which, alas! Sir Frederic was never destined to reach, being found by Mr. Borthwick lying on the Wauchope road, opposite Bloughburnfoot, in an unconscious state, very shortly afterwards breathing his last. Mr. Borthwick now proved in reality a friend in need and in deed, greatly improving the estate by his judicious and prudent outlay (much of it, we believe, advanced out of his own pocket for the time being), and thus ever mindful of the beneficial interest to the proprietor and to the tenants, who had always a cheery, kindly word to speak of Mr. Borthwick, and now revere his memory, as do the shepherds and others who at any time served him, all having had reason to bless his kindly forethought and generosity as a master, and several for substantial support in their declining years when unfit for further service. As a J.P. for the county, throughout a long term of years, his kindly nature ever leaned to mercy when on the bench, yet stern and firm when pronounced vice was brought before him. A sterling friend, benevolent, amiable, and genially hospitable, Mr. Borthwick has passed away, leaving not an enemy behind him, but still many friends to recall his sterling worth. He is survived by his only son, Mr. Alex[ander]. H[ay]. Borthwick, now residing at Milnholm, near Langholm.

“Mr. Borthwick was descended from a family who farmed the pastoral lands on the Border for a long back period. William Borthwick, laird of Raschaw [sic. Raeshaw], Heriot Water, having killed one Pringle, with whom there was a dispute about marches, they fought with swords, and Pringle was killed on the spot. Mr. Borthwick fled to Eskdale, and concealed himself in the woods for a long time. In the meantime his property was seized and everything taken from him. He never returned to that part of the country, but when the duel was forgot, and he had reason to think he was safe from prosecution, he took the farm of Howpaslet, where he died and left two sons, William and Thomas. They kept that farm till the disturbances in Claverholm’s time, when they were advised not to sign [the covenant]. The consequence was that their farm and stock was taken from them, and they had only a few sheep left, which were at grass on the farm of Glendinning, belonging to the Westerhall family. Lady Johnstone had that farm in her own hands. She ordered all the sheep to be put into the fauld, that the sheep that belonged to them might be taken too, but a herd, called John Reive, slipped them over the fauld dyke, and they ran to the hill, and by that means were preserved. Soon after William Borthwick took the farm of Glendinning, and married Janet Scott, sister of David Scott of Merrylaw. In the parish register of Westerkirk for 1701 the marriage of William Borthwick in Glendinning, with Janet Scott is duly registered, his [Thomas’s] great-great-grandfather and mother. David Scott of Merrylaw was descended from ‘Sir Walter Scot of Branxeholme, rescuer of Kinmont Will[ie] [i.e. William Armstrong, the Border reiver and outlaw] from Carlisle Castle with 70 men on the night of the 6th day of April, 1596—this he did with schowting and crying and sound of trumpet,’ and Sir Robert Scot in this way. Sir Walter’s daughter, Margaret Scot, married Sir Robert Scot of Thirlestane, and one of their sons got the lands of Merrylaw.

“As to legend about William and Thomas Borthwick losing their farm and sheep when Claverhouse visited Borthwick Water in 1685, the following extract from a letter sent the writer of this, by the Rev. D. S. Stewart, Hawick, confirms it. October 28, [18]’86—‘In this district there were Covenanters who bore your name. Thomas Borthwick in Howpasley and Isobel Laidlaw, spouse to James Borthwick, were names remitted to the Sheriff for adhering to the Covenanters.’ Seeing that old Sir James Johnstone of Westerhall, called the Persecutor, died in 1699, the probability is that William Borthwick, who was settled down at Glendinning in 1701, may have been a tenant of his. His three sons were William, Thomas, and Walter. William and Walter lived at Enzieholm; the former had Glendinning, and as the tenour of the following advertisement shows that he quited it at Whitsunday, 1753:—‘ADVERTISEMENT. That there is to be sold by public Roup [auction] at Glendinning, in Eskdale, in the Parish of Westerkirk, and shire of Dumfries, on Tuesday, the 22d of May, 1753, William Borthwick’s Stock of Sheep, besides Black Cattle and Goats, upon the said Farm of Glendinning, &c.—the numbers will be as nearly as under— Ewes 820; Quinter Ewes 520; Gimmers 490; Dunmonts 60; Ewe Hogs 500; Wedder Hogs 480; Old tupps 50; Tupp Hogs 40 = 2,960. The Roup will begin at Nine o’clock in the Morning, and it is expected that those who incline to buy will attend punctually at that hour.’

“Thomas, the second son of William and Janet Scott, was the great-grandfather of the late Mr. Borthwick. He in 1732 took the extensive farm of Shaws, in the parish of Yarrow, which he left in 1783; and for one year lived on his led farm at Langshawburn, but the farm of Sorbie in Ewes having become vacant in the meantime, His Grace Henry [i.e. 3rd Duke of Buccleuch and 5th of Queensberry {1746–1812}] gave it to him. There he lived till 1793, when he died. His only son William died in 1792, leaving a family, the eldest son of whom—Alexander Hay Borthwick—then 16, succeeded his grandfather, and was in Sorbie down to 1820, when he left it, going to Hopsrig, where he died in 1837. Beside Hopsrig at the time of his death he had Langshawburn, Mosspeeble, and Lodgegill. His son, Thomas Chalmers Borthwick, got Hopsrig, and Langshawburn. Besides these, he took the farm of Glendinning, which he farmed for one or two leases. Hopsrig and Langshawburn, which had been long in the family, he lost, and removed from at Whitsunday 1887. The way and manner in which the Borthwicks got Boykine and Calkine, now part and parcel of Hopsrig, and Hopsrig itself, is as follows:—‘Sir James Johnstone of Westerhall, Baronet, principal tacksman of these lands of Calkine and Boykine, lets them to William and Walter Borthwick’s brothers, both in Enzieholm, for the space of ten years, if the said [2nd] Duke of Buccleugh [1695–1751] shall live so long, from the term of Whitsunday, 1736, and that for seven hundred and fiftie merks Scots money yearly.’ [1 merk, a silver coin, was worth 13s 4d, exactly ⅔ of a Scottish pound, or about one English shilling.] In the year 1796 John Scott, tenant in Hopsrig, an old bachelor, dying, Walter Borthwick in Enzieholm, still alive, and also an old bachelor, got instruction to leave Enzieholm and go to Hopsrig, which he did, and died there in 1806, aged 96. Lieut. Scott, nephew of old John Scott, Hopsrig, got Enzieholm, and had Fingland, Eskdalemuir, as a led farm. At Whitsunday, 1887, when Mr. T. C. Borthwick lost Hopsrig, he and his progenitors had farmed it for 91 years, and the pertinents Boykine and Calkine for 151 years.”