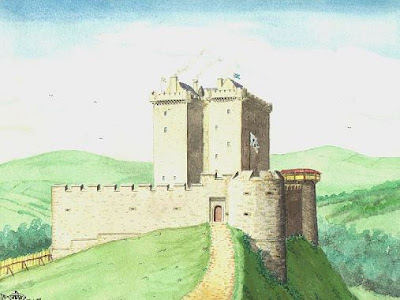 Aunt Jean held onto an issue of The Border Magazine, An Illustrated Monthly Devoted to Border Biography, History, Literature, and Folklore, edited by William Sanderson, author of “Scottish Life and Character,” “The Soft Lowland Tongue o’ the Borders,” &c., Vol. XXIX, No. 345, September 1924. It has lately come to light among her many papers, and I see that she noted with two firm marginal crosses in pencil the following historical notes by Mr. George Hope Tait that concern Borthwick Castle, the family seat in Midlothian. No doubt they struck Aunt Jean, as indeed they strike me, as having powerful genetic resonance, especially that bit near the end about having an eye for ‘brizzen yont,’ and Lord Borthwick’s peremptory treatment of an official of the ecclesiastical court of the old unreformed Catholic see of St. Andrews.
“Borderers travelling to Edinburgh by train never fail in admiration of this wonderful Castle, and most of us have cherished the hope that some day or other we would get into closer touch with the romantic fabric, for its history and association are immediately connected with the Borderland.

Its aspect from the railway is very fine, and its situation as you may see, commands a very extensive view of the surrounding country. Its position on a peninsular knoll, known as the Mote of Lochwarrit, has been singularly well chosen and fitted for the purpose of defence and also defiance. We are told that Sir William de Borthwick, the founder of the Castle, built it on the verge of his property, for this first lord, like all the barons of his age, had an eye for ‘brizzen yont’ [push across, encroach upon] on his neighbours’ ground whenever an opportunity offered.

Borthwick Castle is perhaps the most perfectly complete example of the great strongholds we have in Scotland. It was erected in the reign of James I., 1430, and possesses all the outstanding features of the ancient keep, being surrounded by walls and ditches, strong and formidable gates, characteristic turrets and powerful battlements.

The courtyard is 80 yards by 40 yards. The height of the Castle is 110 feet. The angles of the court were defended by massive towers and bastions, like the srum tower at the gateway, which had the usual portcullis, and was approached by a drawbridge spanning the most, which has now disappeared.
Borthwick castle, according to Sir Walter Scott, is by far the finest specimen of that very class of Scottish castles which consist of a single dungeon or keep.

The masonry of the Castle is very perfect, and the stone is of the finest quality. The restorations have been carried through with great architectural consideration, and the interior of the Grand Hall is well fitted to thrill any keen student of Scott, presenting, as it does, all the imposing features and furnishings, and recalling as perfectly as possible the surroundings and the very atmosphere of the great baronial age. Its chief historic interests relate to the hapless Mary Queen of Scots. In 1566 it is reported that the ‘Queen rode to Borthwick,’ and again in the following year, she accompanied Bothwell thither under strikingly tragic circumstances. This was after the murder of Darnley at Kirk o’ Field. The attachment and preference of Mary Scott for Bothwell, who was accused of the crime, led them to seek refuge here from the justly infuriated authorities (some of whom were his associates in his guilt), but who suspected Bothwell’s ambition to capture the throne. They came to Borthwick Castle, and were followed up by the appearance around the walls of an armed host, determined to capture the pair. Bothwell made his escape by the rear of the castle, and fled to Dunbar. On the evening following his precipitous flight, Mary Stuart, ‘arrayed in the dress of a cavalier, booted and spurred, stole from her chamber here, glided down a turret stair and let herself down from the window of the banqueting hall, where she mounted a nag, and rode out in the darkness, she knew not whither.’ Lost in the glens and swamps of the surrounding country, she found herself at dawn near Black Castle at Cakemuir—two miles from Borthwick. Here, under the direction of Bothwell, after changing her dress, she was taken, or rather chose to follow, her paramour to Dunbar Castle.

This romantic flight of Mary Queen of Scots from this, her last real home of freedom, links Borthwick Castle to one of the most pathetic tragedies in the history of Scotland. Her next appearance was on the ridge of Cousland, not many miles from this place—where, after Bothwell was challenged and fled, she surrendered herself, was taken to Lochleven Castle, passing from misery to misery, and ultimately from captivity to the scaffold. Bothwell fled to Norway, and although he defamed the house of Douglas and the Borders generally, it is to our credit that his attempt to raise his Border vassals to his assistance failed completely, and on his return to Borthwick Castle he must have sensed his failure and visualized his doom.

In the year 1650 Cromwell’s forces opened fire on Borthwick Castle, and compelled its surrender. From this period it passes out of history, and to new owners—Dalrymples and Michelsons, becoming a deserted ruin in 1760. Later, however, and happily, the Borthwicks secured and restored the stronghold of their ancestors, and I think the associations warranted the reverence they have thus bestowed on a building interesting to all lovers of history.

The Borthwicks are an old and notable family—some say they had a Continental origin—others claim that they came from Borthwick Water, but history follows them back to 1067, the time of Malcolm Canmore. Many of the family figured in the reign of James II., entrusted with the ratification of Treaties—some of them trusted councilors, ambassadors and soldiers. Baron Borthwick and his son fell at Flodden [Field], and another son, who survived the battle, commanded the artillery on that fateful day [September 9, 1513]. It was said that this young Borthwick wanted to cannonade Twizel Bridge to prevent the English army crossing it, but King James refused. It was this daring young gunner and military engineer, who under James V. was made Governor of Stirling Castle.

One of the most amazing episodes connected with Borthwick castle happened with John Renwick, the next baron, who was a staunch supporter, at the time of the Reformation, of the old Roman Faith, and who was a great friend of Queen Mary later. Notwithstanding his reverence for the Faith, he entered with great licence into a mock entertainment, known as the ‘Abbot of Unreason,’ whereby he not only suffered, but encouraged his servants to ridicule and abuse William Langlands, an officiate of the See of St. Andrews. This hilarious caricature of things sacred ended in ducking the priest in the mill dam. The mob, dressed and disguised as dragons, lions, wolves, asses, and swine, and playing outrageous music on unharmonious instruments, returned to the Church with the bound and dripping pastor, where, as a becoming refreshment, he was made to eat some letters of excommunication he had delivered against my Lord Borthwick, and drink the wine in which they had been steeped. When he was dismissed by the Abbot of Unreason (who, I presume, was the Laird himself), and who gave him the assurance that any more documents arriving from the head of the Church ‘would a’ gang the same gait,’ he was allowed to participate, with the best grace he could, in the revelry and fun of the evening. Readers of Scott’s ‘The Abbot’ will recall how effectively Scott uses this strange and incongruous pantomime with the fall of Melrose Abbey, and as evidence of the warrant it had as a permissible institution. We have only to look up at the famous gargoyle on the Abbey of the swine playing the bagpipes.”
Posted by Angus Trumble at 1:07 PM