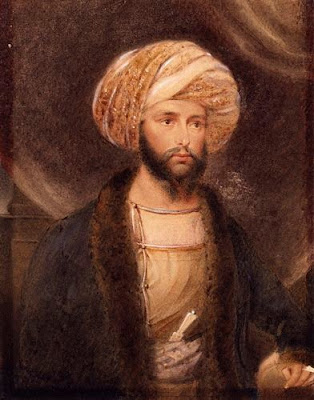 The pretty town of Abbottabad in what was once known as the Hazara district of the Peshawar division of the North-West Frontier Province (i.e. Khyber Pakhtunkhwa in modern Pakistan) was named after Major (later General Sir) James Abbott, (K.C.B., 1807–1896), who served as first deputy commissioner from 1849 to 1853. The name was bestowed on or soon after the date of Abbott’s departure.
Earlier, the Major was one of “Henry Lawrence’s Young Men,” that is, officers of the Bengal Artillery who were posted as “advisers” following the so-called First Sikh War of 1845–46. Their commanding officer, Sir Henry Lawrence, K.C.B. (1806–1857), Resident at Lahore, reported directly to the Governor-General, and was largely responsible for coordinating British operations on the Northwest Frontier.
This week, therefore, as Abbottabad exchanges the covert, transatlantic gaze of a very few for the public glare of millions, the name of Major Abbott is also in the news.
His bizarre valedictory poem entitled “Town Abbottabad” certainly appears to exist in situ as a public inscription, and also appears on the relevant wiki page. Major Abbott wrote several other poetical works, of which the most ambitious was The t’Hakoorine: A Tale of Maandoo (London: James Madden, 1841). A second edition, The Legend of Maundoo, was published in London in 1893 by Kegan, Paul, more than fifty years later, and according to the title page by that time Abbott was also “the author of ‘Prometheus’ Daughter [A Poem, London: Smith, Elder & Co., 1861],’ ‘Constance [A Tale, London: Smith, Elder, 1877],’ ‘Allaooddeen [A Tragedy, and Other Poems, London: Smith & Elder, 1880],’ &c.” As well, he wrote Tales of the Forest: containing The Lotus-Walker, and The Spoiler’s Doom (London: James Madden, 1853). It is not clear why on that occasion the Major sheltered behind the pseudonym of “Snellius Schickhardus.” This mouthful seems to be a fusion of the Latinised surnames of the late sixteenth and early seventeenth-century astronomer–mathematicians Willebrord Snellius (1580–1626) and Wilhelm Schickard (1592–1635). Was this perhaps a nod, however distant, to the clunky mathematical curriculum prescribed years earlier at the Hon. East India Company’s Seminary (Addiscombe) near Croydon in South London, or was there another reason? Meanwhile, Legends, Ballads, &c. (Calcutta: Sanders, Cones & Co.) followed in 1854, but these carried the author’s real name.
At first The t’Hakoorine was damned with faint praise in the Athenæum (No. 699, March 20, 1841, p. 220), but much later, writing in the Academy (No. 1276, October 17, 1896, p. 284), Abbott’s obituarist, “J. S. C.,” viewed it more kindly, indeed as “quite readable, being after Byron’s early manner [sic],” though he added that “of the occasional verses the less said the better.” Presumably one would include his “Town Abbottabad” in this category, but I can find no trace of the original poem in any nineteenth-century printed source. Assuming it is genuine, I suppose Stephen Moss’s similarly bracing critique in the Guardian on Monday is justified, but it is also worth underlining that the Major’s contemporaries saw him in a very different light.
According to Colonel Henry Vibart (Addiscombe: Its Heroes and Men of Note, with an introduction by Lord Roberts of Kandahar [Westminster: Archibald Constable and Co., 1894, p. 372]): “Sir Henry Lawrence described Major Abbott as ‘of the stuff of the true knight-errant, gentle as a girl in thought, word or deed, overflowing with warm affection, and ready at all times to sacrifice himself for his country or his friend. He is at the same time a brave, scientific, and energetic soldier with peculiar powers of attracting others, especially Asiatics, to his person.’... In ‘The Gossip of the Century[: Personal and Traditional Memories—Social, Literary, Artistic, &c.]’ [London: Ward & Downey, 1892–98] it is remarked: ‘He had poetical tastes and literary ability of no mean order, and he published several works. His verse is powerfully imaginative, and exhibits great play of fancy, while in his picturesque description we trace the inspiration of a poetical mind.’”
When this was written, the Major was an 88 year-old widowed general living in quiet retirement at Ryde on the Isle of Wight, so considerations of deference and tact may have colored the literary assessment. Indeed he was then described as “the Nestor of the Indian Army.” How very remarkable, therefore, that the events of recent days should have conspired to redirect a strong beam of light upon the effusions of the Major’s pen, and that, inevitably I suppose, this should prove far, far less forgiving. After all, one could well argue that the current Taliban and al-Qaeda mess goes all the way back to the Great Game, the first Afghan War of 1839–42, the complete destruction of Elphinstone’s army, and all subsequent attempts to establish any sort of control of what lies beyond the Khyber Pass.
Posted by Angus Trumble at 10:29 AM