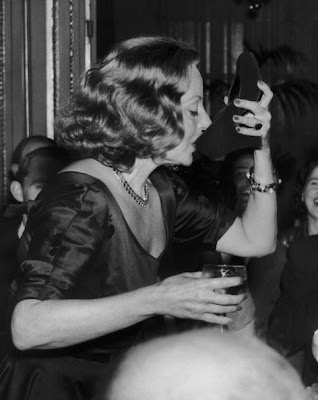 The practice of drinking champagne from a lady’s shoe enjoyed one final moment of resuscitation in the early to mid-1950s, thanks in part to a public-relations blitz surrounding the publication of the autobiography of Tallulah Bankhead, that most flamboyant personality of American show business. Here she is, celebrating the occasion at the Ritz in Piccadilly in 1951, using chocolate suède. I doubt if Farrar, Straus and Giroux in New York or Yale University Press in London would object if something similar were staged for the benefit of the media, and my new book, The Finger: A Handbook. But in these times of economic bleakness would they pay? I must remember to ask them. In any case this early 1950s revival of the podiatric champagne-quaffing stunt was hardly exclusive to Miss Bankhead. According to the London correspondent of the Sydney Sun-Herald (Sunday, November 7, 1954, p. 57):

Two ex-Gaiety Girls who reigned supreme among Edwardian sprigs of aristocracy came to verbal blows this week over whether the dandies of their day drank champagne out of their slippers. Said Ada Reeve, on her 80th birthday: “If it ever occurred, it was probably an isolated incident at some drunken party—the sort I preferred not to go to.” This aroused the ire of Ruby Miller, equally as celebrated and about as old. “Of course it is true!” snapped Ruby. “Why, grand dukes were always swilling champagne out of my slipper.” She added: “But Ada and I belonged to different eras. Ada was long before me.”

The “Gaiety Girls” of Edwardian musical theater came to prominence in the mid-1890s at George Edwardes’s Gaiety Theatre, Strand, and, through sheer force of personality, apparently gave rise to the curious phenomenon of “Stage Door Johnnies,” who were thought to be eagerly downward-leaning, class-wise. Ada Reeve (1874–1966) played Cleopatra in The Great Caesar in 1899, and in the same year created the role of Lady Holyrood in the hit musical comedy Florodora. She never looked back. Ruby Miller (1889–1976) was indeed fifteen years younger, but I suspect her remarks were in part driven by deeply encoded media savvy, a distant memory of allegations once leveled in Chicago at the Grand Duke Boris of Russia, and generalized sexagenarian over-excitement—perhaps further stimulated by the demise of food rationing in Britain on July 4, 1954, and the joy of six months’ unfettered consumption of meat.

Posted by Angus Trumble at 8:08 AM