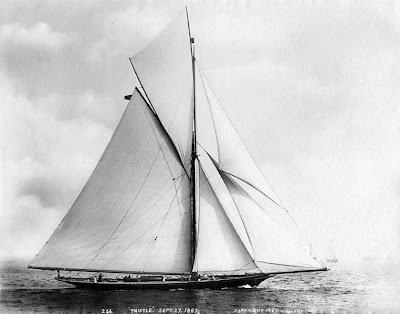 What is beginning to emerge from my inquiries into the custom of drinking champagne from a lady’s white satin slipper is that this weird craze was most probably brought from the continent into the theater world and mess rooms of late Regency London. It lingered through the mid-nineteenth century, but underwent a whole-of life revival on both sides of the Atlantic in about the 1870s, and flourished until the First World War.

According to the San Francisco Chronicle (July 18, 1889, p. 3), the actress Sylvia Gerrish (1858–1906), “one of the most remarkable women on the stage,” was indirectly responsible for reintroducing it. Miss Gerrish, they stated, “isn’t pretty, she can’t sing, but she has the most wonderful legs and feet in the world. Nothing like them has ever been seen before, nothing ever will again. They have walked with her right into fame, popularity, and a big salary.”

...The owner of the Thistle so worshiped those beautiful feet that he filled one of her tiny satin slippers with champagne, drank to the success of his boat, and then nailed it to the cutter’s mast; and though it didn’t bring him luck, he did not cease to worship at the owner’s feet until his defeated racer bore him away from our shores.

The Scottish cutter Thistle (above) was designed by George Lennox Watson and built by D. & W. Henderson and Co. for a syndicate of mostly Presbyterian owner–members of the Royal Clyde Yacht Club led by one James Bell. The vessel was launched amid great secrecy on April 26, 1887, contested that year’s seventh America’s Cup in Newport, R.I., and lost twice. In theory any one of the members of the syndicate could have engineered that amusing publicity stunt using Miss Gerrish’s slipper (French heels, size 1), but it is not clear how they obtained it.

To be fair, there is no evidence to suggest that Miss Gerrish ever claimed credit for re-inventing the champagne-and-slipper habit, but Mrs. Bettina Ordway Gerard Padelford Raffael Wolff Schuyler most certainly did. A notable beauty, “Pretty Betty” was the daughter of Brigadier General Albert Ordway of Virginia, sometime chief of ordnance of the United States Army, and in retirement commander of the National Guard of the District of Columbia. Bettina Ordway was born in Washington; educated by nuns in Georgetown; made her début as a Reconstruction “southern belle” (to universal acclaim), but soon ran into trouble. According to the Chicago Daily Tribune (July 12, 1896, p. 38):

There was a banquet at White Sulphur Springs in [West] Virginia, whither the Ordways had gone for the summer, and Miss Bettina was the loveliest of the guests. In a dazzling evening dress, adorned with laces and jewels, she sat among gorgeously arrayed diplomats, army officers, and government officials. Everybody drank freely, and Miss Bettina’s face became flushed and her eyes sparkled with unusual brightness. A young man who was attached to the French Embassy and who had shown considerable attention to Miss Ordway during the season sat opposite her. Just as they were rising from the table a young cavalier who had sat beside her began to jest with her about the young Frenchman’s assiduous devotion. “Some day,” said the young man, “your admirer will probably be famous.” The incident that followed was over in a minute. Into the motives that prompted her action it would be idle to inquire. Suffice it that the curl of Miss Bettina’s rosy lips became intensely mischievous and that, with her hand under the table, fumbling among the draperies, she replied: “I’ll make him the most famous man at the Springs tomorrow.” And thereupon, with an enchanting smile, she held aloft a tiny white satin slipper, warm from her foot, and bade a waiter fill it with champagne. She then proferred this novel bumper to the Frenchman. A hush fell upon the room and every eye was turned to the young man’s face. He was painfully embarrassed. From his neck to the roots of his hair his skin was scarlet and he looked as if he were devoutly wishing that the floor would open and swallow him. The slipper was within his reach and a pair of roguish eyes were turned full upon him. He hesitated for one long moment, and then—true to his country and his calling—he took the slipper and quaffed deeply of the wine. His gallantry was greeted with a burst of applause, With a low bow he returned the slipper to its owner, who, perceiving that there was still some wine in it, raised it to her lips and with her eyes upon the young Frenchman’s face drained it to his health.

There is a chapter about gloves in The Finger: A Handbook, but nothing more on shoes, and, needless to say, no footnotes.

Posted by Angus Trumble at 6:49 AM