Counting to the power of eight 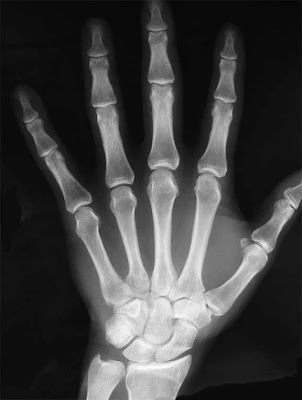 I have been fossicking through the mountains of paper that gradually accumulated while I was researching and writing The Finger: A Handbook, lately published in New York by the house of Farrar, Straus and Giroux, in other words sweeping the cutting-room floor. Sometimes the things you abandoned at first eventually found their way back into the book by another route—and indeed might have benefited from the ballast of additional evidence that was originally discarded for completely different reasons. For example, at the beginning of the chapter entitled “The Finger and the Economy” I explore the relationship between the fingers and counting to the power of ten: “There have been important exceptions, such as counting to the power of twenty (fingers and toes)...and more primitive counting systems developed around the concepts of two (hands), four (hands and feet), five (the fingers of one hand) and, intriguingly, eight, a rare anomaly once encountered among a certain group of First Nation Americans which, according to John D. Barrow, owes its existence not to the fingers themselves but the spaces separating them—four on each hand.”
Maybe counting to the power of eight is not such an anomaly. I have just retrieved a letter addressed from Kyrenia in Cyprus by one “H. Campbell” to the editor of that indispensable monument to fruitful curiosity and antiquarianism in England, Notes and Queries (February 15, 1930):

OCTAVAL NOTATION.—Has it ever been suggested that the European races (and perhaps others) originally omitted the thumbs and used only the eight fingers [sic] in counting? I can find nothing about it in the new [thirteenth 1926] edition of the “Encyclopædia Britannica.” Yet how else can we account for the fact that the words for “nine” and “new” are so alike in four out of the five main branches of the White Races? I cannot speak for the Slav tongues; but I daresay the rule holds true in them also. Thus, in Latin “nine” is novem and “new” is novum; Greek en-nea and nea; German neun and neu; Gaelic naodh and nuadh. English appears to be an exception; but this is due to the fact that we get “nine” from the German and “new” from the Scandinavian, the two words in the latter being “ni” and “ny,” this last word being pronounced very much like “new,” only much thinner. Gaelic shows the similarity more clearly when we remember that the root of “nuadh” is “nodh—.” As to Greek, one can hardly doubt that “en-nea” was originally “hen-nea” (one new”). All southern races tend to disuse the aspirate. Furthermore, in all these languages we have a trace of the root of “two” in the word for “ten.”

The Russian девять (nine) does not seem especially close to новый (new), and I doubt if, being rather preoccupied with race, H. Campbell would have attached much significance to octaval counting among the First Nations Americans so carefully observed by John D. Barrow. It does strike me, though, that counting to the power of eight makes better sense as an expression of the number of intervals between all ten fingers than as a tally of fingers excluding the thumbs, because, as far as I can tell, anxieties about whether or not the thumb is a bona fide finger simply did not exist before the nineteenth century. I wonder why that is so?

Posted by Angus Trumble at 2:08 PM