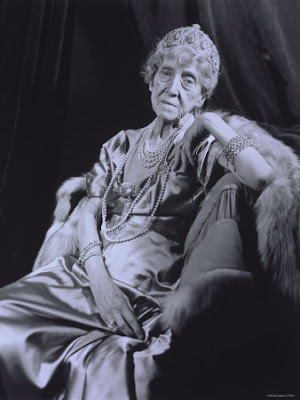 “What wonderful fruit. How splendid if everybody made Christmas puddings this year of Empire ingredients,” said Princess Marie Louise, on viewing the Australian dried fruits exhibit at the Food Exhibition at Olympia. Princess Marie Louise, cousin of the King, who opened the exhibition, wrote her autograph on an Empire Christmas pudding recipe compiled by Australian food experts.

—Argus (Melbourne), Monday, November 15, 1926, p. 11.
H.H. Princess Marie Louise was a granddaughter of Queen Victoria, the fourth child and younger daughter of Princess Helena—“Lenchen,” as she was known, the Queen’s slightly difficult third daughter—and of Prince Christian of Schleswig-Holstein-Sonderburg-Augustenburg. In old age Princess Marie Louise wrote an engaging but slightly wacky book entitled My Memories of Six Reigns (1956). It is well worth reading, as much for its frankness and sprightly charm, as for the table-rapping element. The princess was most unfortunate in having married (1891) Prince Aribert of Anhalt, the unsatisfactory third son of the reigning duke—a match engineered with unerring lack of judgment by Marie Louise’s first cousin Kaiser Wilhelm II. The marriage was annulled late in 1900 after the prince was caught in flagrante delicto with an attractive young male servant.

In view of the ensuing scandal, Princess Marie Louise discreetly toured Canada and the United States.

Thenceforth she lived as a minor but active member of the extended British royal family based in London, and, with her Aunt, Princess Louise, Duchess of Argyll, was instrumental in introducing the young photographer Cecil Beaton into the Court circle.
Here she is, wearing the spectacular “Indian” tiara by Cartier, perhaps also reflecting upon the superior quality of Australian dried fruits. This charming informal portrait photograph was taken near the end of her life by Cecil Beaton.

I have not yet located the Empire Christmas pudding recipe to which the Argus correspondent refers here, nor indeed those “Australian food experts” but I am working on it.
Posted by Angus Trumble at 4:21 PM