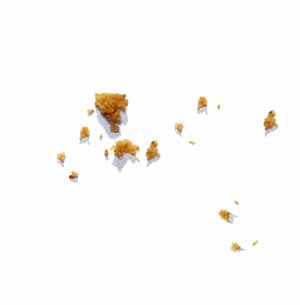 Bits and pieces, odds and ends, this and that—whilst pottering about in my flat yesterday morning a single hold-all word for these vague but necessary collective terms, with special application in the kitchen, popped into my head: manavalums.

This did not happen by accident. Manavalums is a word that my dear father used quite often, usually in connection with stray and otherwise maybe unidentifiable crumbs of matter (not always food), with, I seem to recall, a slight but definite hint of distaste. Yesterday it was as if I was hearing his voice from years ago, speaking it in his gentle, and good-humored way—“manavalums.”

No doubt some of my readers already see into the heart of a small but intriguing problem, but for those of you to whom manavalums are a closed book I shall set it out here in case it emerges that my late father unwittingly held the key to a tiny instance of linguistic evolution.

Because, upon taking a few minutes after lunch to look it up in the Sterling Memorial Library—that incomparable treasury of arcana—I find that the term exists in a generous handful of slightly different forms, none of which, it turns out, ends in –ums:

For example, in their marvelous Slang and Its Analogues, Past and Present: A Dictionary, Historical and Comparative, of the Heterodox Speech of All Classes of Society for More Than Three Hundred Years, With Synonyms in English, French, German, Italian, etc. (1890–1904, Vol. 3, p. 278) John Stephen Farmer and W. E. Henley gave “manablins, subs. (old)—broken victuals, also manavilins” and compare it with the French arlequin, –ine and le bijou.

Now this brief article—which was not revised or altered in any way for the great second edition of 1989—contains only four historical quotations, but they are noteworthy.

The first and earliest is a reference to the Dictionary of Modern Slang, Cant, and Vulgar Words, Used at the Present Day in the Streets of London; the Universities of Oxford and Cambridge; the Houses of Parliament; the Dens of St. Giles; and the Palaces of St. James; Preceded by a History of Cant (1859) by J[ohn]. C[amden]. Hotten (1832–1873), where it is given as manavilins.

The second is to James Templeman Brown, “The Whalemen,” i.e. part 1 of No. 2 “The Whalemen, Vessels and Boats, Apparatus, and Methods of the Whale Fishery,” which in turn belongs to Part XV “The Whale-Fishery” of Volume II in Section V of the vast Fisheries and Fishery Industries of the United States (1884–87), edited by George Brown Goode (1851–1896): “For supper in the cabin: salt beef and pork, warm soft tack, butter, sugar, tea, and sometimes hash, and probably pie. The boat-steerers have the same, and the foremast hands, salt beef, pork, and hard tack, and occasionally pie. To the abovementioned fare should be added, when they can be had, the “manarolins” [the OED adds here “?read manarvlins”] of the whale-men—that is, fresh meat, vegetables, milk, butter, eggs and fruits, which may be obtained when the vessel touches upon a foreign shore, but these are luxuries of life that cannot always be had.”

Number three is to a passage in chapter xxii of his great novel Robbery Under Arms (1882–83), by Rolf Boldrewood, the pseudonymn of Thomas Alexander Browne (1826–1915): “There was a fence round this garden, some of the rails lying there rotten enough, but it takes time for sound wood to rot. He’d a stool and table too, not bad ones either, this Robinson Crusoe cove. No end of manavilins either.”

And finally we are directed to Edward B. Kennedy’s The Black Police of Queensland (1902), where in chapter VIII on p. 101 “odds and ends are described in the colony by the one useful old naval word ‘manavlins,’ a term which embraces every small thing.”

Now the online version of the OED has made some revisions, both to the definition of manavilins, and to the range of sources. Manavilins is now defined not as “slang,” but “slang (chiefly nautical),” viz. “scraps of food, leftovers; titbits; (more generally) odds and ends, supplementary materials.” And several new sources are added, most of them American, two of which now antedate Hotten. In their Life in a Man-of-War; or, Scenes in “Old Ironsides” During Her Cruise in the Pacific, by a Fore-Top-Man (1841), p. 169, H. J. Mercier and W. Gallop remarked that “de way dey overhaul a range of every pan, dish, and kettle, to find de manavalins, is nobody’s business.” Meanwhile, in his White-jacket; or, The World in a Man-of-War (1850), p. 158, Herman Melville speaks of “various sea-rolls, made dishes, and Mediterranean pies…all of which come under the denomination of Manavalins.”

Two comparatively recent sources do not add much, but point to a measure of persistence in the United States. In an article entitled “Duffs, Lobscouse, and Manavelins,” (Yankee, Vol. 44, No. 1, January 1980, p. 166), Thomas G. Lytle explained that “Whalemen ventured to all corners of the world, and when possible they dined on giant sea turtles, seal liver, bananas, coconut, caribou, porpoises, and foods of all the natives in all the lands they touched, from the Arctic to the tropics. Of course these manavelins were perishable and lasted only a short time.” In Graham Stuart Thomas’ Three Gardens of Pleasant Flowers: With Notes on Their Design, Maintenance, and Plants (1983), p. 9, meanwhile, we find the rather cloying remark, “Plants as a rule increase…and the giving away of manavilins is a blessed form of friendship in which we all take pleasure.”

To these published sources (and thanks to the astonishing power and spread of British Periodicals online I and II, as well as Google Books) we may now add a number of previously undocumented instances: (a) Sailors’ Life and Sailors’ Yarns, by Captain Ringbolt, the pseudonym of John Codman (1847), p. 150: “Hooking manavlins was a favourite amusement with him: not so much for gratifying his appetite, as for exercising his dexterity”;

(b) Captain John Harland, A Glossary of Words Used in Swaledale, Yorkshire (1876), p. 120: “Malhavelins, s. pl. small perquisites or dues.” An identical definition, incidentally, published in the same year, now makes it into the online OED, i.e. in Francis Kildale Robinson’s, Glossary of Words Used in the Neighborhood of Whitby (1876)—more than a coincidence, I think, but I am not sure which gentleman was availing himself of the other’s notebooks.

(c) Charles Mackay, The Gaelic Etymology of the Languages of Western Europe and More Especially of the English and Lowland Scotch, and of Their Slang, Cant, and Colloquial Dialects (1877), p. 275 “manablins… [i.e.] broken victuals”;

(e) Roland Folger Coffin, An Old Sailor’s Yarns: Tales of Many Seas (1884), chapter VIII, p. 90: “I’d been shipmates with the steward in two or three ships, and so had got to chimin’ in with him in the way of yarnin’ and manavlin’s [sic]”;

(f) Henry Trader of Chirk, North Wales, “Manavlins,” Bye-Gones: Relating to Wales and the Border Counties, March 30, 1892, p. 282: “A friend of mine tells me that he has been accustomed from childhood to use this word for entrails or what are usually called “innards,” the pluck, heart, livers, lights, sweetbread, &c., of an animal. The word is a very strange one; it has a Welsh look about it”;

(g) Manavilins: A Muster of Sea Songs as Distinguished from Shanties, Written for the Most Part by Seamen, and Sung on Board Ship During the Closing Years of the Age of Sail, 1890–1910, by a certain Rex Clements, was published in London in 1928 by Heath, Cranton, Ltd.;

and, finally, (h) John Arthur Barry’s “Sea Stories, No. 3: John Hall, Master Mariner Millionaire,” (Strand Magazine, Vol. 21. No. 123, March 1901, p. 319) where, with racist disapproval, the Malay passengers aboard the Countess of Glenavon are “recipients of many dainty remnants from the saloon table, besides other ‘menavelings,’ that by rights should have gone into the boatswain’s mess.” Interestingly Barry settled in New South Wales in the 1870s, and served as local correspondent for The Times newspaper. His fiction exploited much local color, so together with those of Boldrewood and Kennedy this citation may be regarded as authentically Australian.

Intriguingly there is not one instance of any of these delightfully varied forms of manavilins to be found in the current run of Australian Newspapers Beta, though it is definitely present in Webster under manavelins or manavilins and, elsewhere, cross-referenced under menavelings, viz. “odds and ends of food; leftovers, also fancy or made dishes.” This last is the surprising sense that it had somehow assumed among the New England whale-men so closely observed in the late 1870s and 1880s by James Templeman Brown, and therefore perhaps a reflection of the scarcely conceivable austerity of their mode of living whilst at sea.

I am not quite sure how Dad turned the naval and/or more broadly sea-faring and/or Welsh / Border / Yorkshire / New England and thence to Australian colonial usages of manavilins or menavelings into manavalums, but let us assume that this may be a unique instance of nautical terminology comingling with the conventions of the legal profession in its old Latin-loving guise, at least in the mind of one well-beloved man who was wholly devoted to both. For Dad’s sake I shall continue to use manavalums, and shall also keep my eyes peeled in case his word ultimately proves more widespread, and therefore requires further documentation.

In any case, given that half of the historical references to manavilins currently cited by the OED are to Australian sources, I should think that an appropriately worded article should be added to the otherwise excellent Australian National Dictionary, which specializes in and indeed celebrates our glorious array of linguistic manavalums.

Posted by Angus Trumble at 9:54 AM