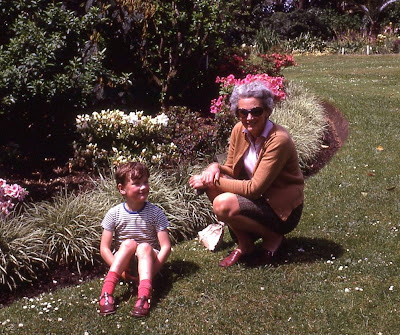 Anniversaries are peculiar, because aside from a mere accident of the calendar there is no particular reason why Mum should seem any more absent today than she was this day last week, the week before that, or through recent months. Yet one feels it keenly: It is two whole years almost to the day since she died, and not quite two years since we buried her. Memories cluster in, all of them happy—above all of Mum’s elaborately rationed sense of the ridiculous, and her infectious laughter—especially the galloping timbre of an unrestrained chuckle, followed by the swooping, follow-up sigh that said: “How silly,” whatever it was. I think, I hope that my brothers and I have inherited this quality, though I also like to think that we ration it rather less than she did—perhaps that is due to the part of us that devolves from Dad. Self-discipline was probably her most admirable quality, that and thrift. She would never think of replacing something if it could be repaired, or of indulging in any luxurious extravagance for herself, more’s the pity because she could easily have afforded it. She took pleasure in The Times crossword puzzle, a cup of tea, her pretty garden, a game of patience, and a good book. She had had a serious respiratory illness in the late 1950s, which left her lungs severely scarred, and therefore vulnerable to respiratory trouble in old age. This combined with serious anti-inflammatory medications for rheumatoid arthritis seem to have destroyed her health in the last few years of her life. After she died, her doctor remarked to me that she had simply exhausted all her reserves of strength. Quite so, but I often wonder whether those reserves might have been better preserved by us, by him, and by her, because she was a stubborn and stoical old lady, and clearly lived with a greater measure of discomfort than anyone really understood. But she soldiered on to the very end, and mercifully the end was as swift as can be. She was spared the distress of leaving her house, losing her garden, the indignities and ugliness of aged care, and the misery of dependence, decrepitude, and senility. Perhaps this is enviable, however I cannot but wish that she was still en poste in Melbourne, for a newsy phone call every Sunday night (Monday morning her time), and regular doses of stern but shrewd advice. In melancholy moments I am reminded of what my old friend Kelly Read remarked just after Mum died: Your parents don’t really vanish so much as move in with you. It is as if they are quietly pottering about in the next room, or in your head. On the whole, I think this is true.
Posted by Angus Trumble at 10:02 AM