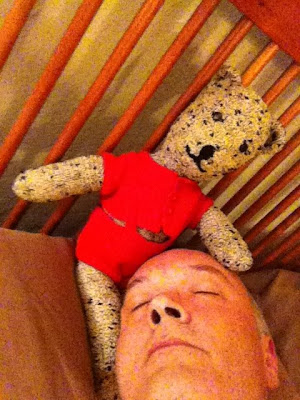 We go the whole way back, my bear and I.
His name is “Brownie,” though I’m not sure why:
The threads are dappled grey, not brown, with which
Aunt Anne contrived and made him, stitch by stitch,
Before my birth, love’s labour unremitting:
She never shone more brightly than when knitting.
I miss her still, my thrilling, clever aunt,
Her many skills she never wished to vaunt:
The semaphore she learned and trained to guide
Our ships past Rottnest Island, served with pride
In wartime—Russia was our ally then;
Her letters, and the sharpness of her pen,
But funny too; she taught me how to swim.
Her work was therapy, not mind but limb,
A physio, and “farmer’s wife” as well,
Admittedly far better in that shell
Than Uncle Henry handled sheep or cattle,
Through flood and drought with courage she did battle;
Like Mum, she built in winter massive fires,
Dispatched whole trees, killed snakes with fencing wires.
In town from time to time Aunt Anne would see
A play or concert, kindly taking me:
That’s how aged six or seven at the Palais
I saw Nureyev leap in my first ballet!
To Paris and l’Étoile she took me straight,
And climbed the arc, then let me stay up late.
Though shy, dear Brownie knows these things by heart,
Reminds me, too, how well she learned the art
Of complex origami from Japan.
How lucky that our smashing lives began,
My bear and me, not part of any plan,
But soon enough to know and love Aunt Anne!
Posted by Angus Trumble at 12:13 PM