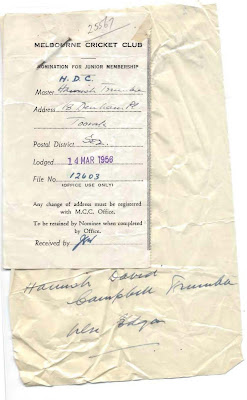 Lately I have commenced the awesome task of sorting through and identifying the Trumble family papers that are ultimately destined for the National Library of Australia in Canberra. Dad’s run of scrapbooks is fascinating because he kept everything—pretty much in chronological order—a confetti of mementoes of professional and domestic life from 1949 to the 1980s. Nothing he regarded as too trivial to escape notice and preservation. Beyond the scrapbooks, however, there are hundreds of other documents and photographs that came from previous generations—a group of long letters, for example, from the novelist Mary Grant Bruce to her lifelong friend our great-grandmother Borthwick and to her daughters, Aunt Jean and Aunt Kath, which seem to imply that various aspects of the Billabong stories, and of the Linton family of Gippsland, were based at least in part on the Borthwick family of Bald Hills near Sale. As well there is a sheaf of more official papers. This one is typical. Evidently inspired by the glorious Trumble heritage of test cricket, Dad put each of his sons up for junior membership of the Melbourne Cricket Club—at birth. Here is Hamish’s docket, lodged when he was a fraction more than two months old, on March 14, 1956. The annotation down below “Hamish David Campbell Trumble / plse Edgar” is a courteous instruction to Edgar Parker, who for years served as a law clerk (I think, I hope I am right about that) at Mallesons, and as the designated custodian of valuable and/or important documents that Dad preferred to keep under lock and key in the office: documents such as deeds, titles, share certificates, passports, and the completed nomination forms for his four sons’ junior membership of the Melbourne Cricket Club. As I recall, Mr. Parker began his lifelong career of devoted service to the partners of Mallesons as a junior deputy to the ancient Mr. Ted Russell, ultimately rising in the mid-1970s to be in charge of the files, which in those days were still folded in half down the middle and tied with red tape. Files pertaining to dormant matters were customarily retained for a period of about fifteen years, after which time they were put in large canvas bags and consigned to an industrial incinerator, to make way for the next year’s accumulation of files. The task of doing this was allotted to the teenaged sons of partners during the first few weeks of the Christmas holidays, and so it was that in the summer of 1979 Mr. Parker became my very first boss, and an exceedingly kind and benevolent one he was too. I was fifteen, but looked closer to nine.
Posted by Angus Trumble at 7:52 AM